Wooly Bumblebee vs. Sargon of Akkad

New e-drama is brewing between 2 youtubers once again: Wooly Bumblebee and Sargon of Akkad. This article will just go over the timeline of events for anybody who wants to get caught up before forming an opinion of their own.

DISCLAIMER: I’m trying to remain neutral about this issue, remember that I am not Ralph. I look up to Sargon as an established youtuber and leading figure in the anti-feminist movement but I also participate in streams with Wooly Bumblebee. I’m caught between a rock and a hard place through this. My decision was thus not weighing on either side and simply listing the facts and ask unbiased questions to both of them. I have done an interview with Wooly already and also have one scheduled with Sargon on Monday. I will wait until I have both sides to release them at the same time on my YouTube channel.

At the same time, Sargon posted a video on his channel to explain his motivations behind it (41 minutes long):

Vee has also made a video supporting the petition (2 minutes long):

Not everybody was in favour of it, feminist Kevin Logan made a video criticizing the petition (11 minutes long):

Sargon released another follow-up video on the 21st (5 minutes long):

No drama yet, until later that day when Wooly Bumblebee tweeted to Sargon. 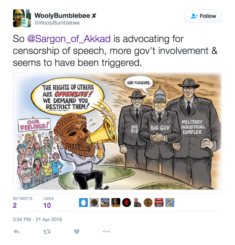 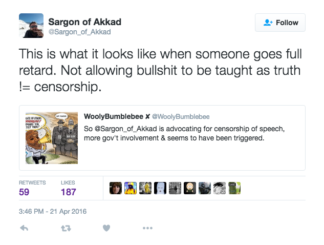 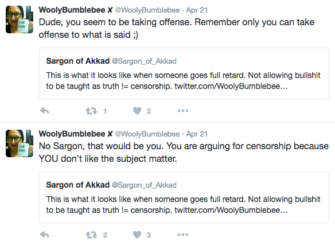 She then invited Sargon to a stream on her channel at 4pm PST (7pm EST or 12pm GMT): 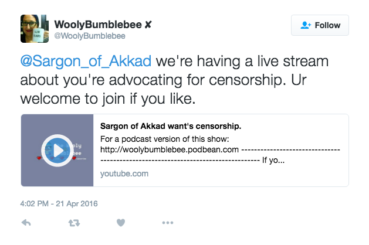 Here is the stream from Wooly Bumblebee’s channel, Sargon and Vee join around the 1:22.00 mark (4.5 hours long):

NOTE: I was not part of that stream myself.

The next day, on April 22nd, Sargon released another video on the topic (14 minutes long):

That same day, Wooly published an article on her own blogging site Problematic People:

Sargon Of Akkad is Promoting Censorship

Then her husband MrWoolyBee wrote an article of his own:

Sargon replied that same day in a stream with Vee and Kevin Logan, which was then joined by Wooly and her husband around the 1:17.00 mark (3 hours long):

Wooly and her husband replied to Sargon’s stream in a follow-up stream of their own (3.5 hours long):

Actually, I did watch it all but if you want to get caught up on the entirety of all the details of the argument, that’s over 12 hours of videos to watch.

I don’t disagree with everything that Sargon is saying. What I do disagree with, is the method in which he did the petition and the way he worded it, because it doesn’t help our side being anti-feminist, you know, against feminism, whatever you want to call yourself. It just doesn’t help. It makes us all look like hypocrites and advocating for censorship when it’s worded in that way, when it’s put out in the way that Sargon put it out. That’s my biggest problem with it because we’re already being tarred and featheerd and misrepresented by feminists SJWs. We don’t need more fuel out there for them to constantly misrepresent us and they can use this to misrepresent us and they wouldn’t be far wrong if they took that petition literally.
-Wooly Bumblebee, 9.8k subs

Yeah. I mean we wouldn’t want to stifle these poor special snowflakes right to use government funded institutions to push a totalitarian political narrative that threatens to turn our society into an orwellian nightmare like it already has in certain european countries. That would be mean. 🙁 F****ing idiots.
-Naked Ape, 42k subs

The petition is the first step towards organised resistance to social justice. Please sign it and make your voice heard.
-Sargon of Akkad, 301k subs