YouTuber Gets Slimed By Outrage Machine After Passing on New Ghostbusters

I’ve talked about the new Ghostbusters film here on the site a couple times and I’m on record saying it looks like it’s gonna suck. Still, I’m cynical enough to think it might somehow make it’s money back, but that opinion has started to change for me over the months. Why? Well, I’ve rarely seen a movie get this much negative publicity before opening. I won’t say never, since I was alive during the Waterworld disaster (yes, I’m 30 and feel old as fuck after writing that last sentence).

But what’s been happening a lot as of late is SJWs and their cucked male support team sliming every white male who comes down the pike and says they’re not interested in the reboot. That’s happened again today with the release of the Angry Video Game Nerd’s (James Rolfe) new YouTube video entitled Ghostbusters 2016. No Review. I refuse.

“At least [Harold Ramis] didn’t live to see this shit.”

I couldn’t have said it better, man. Apparently, a white guy stating his opinion in such a blunt manner is now equal to misogyny. Nevermind the fact that he gives many reasons for not liking the film, none of them having to do with it possibly being utter shit. The fact that it’s named Ghostbusters instead of New Ghostbusters or something similar is indeed a shameless ploy to squeeze every last dollar possible out of this garbage fire. He talks about the complete lack of fan service along with the boneheaded decision to have some of the old cast members come in for cameos…playing different characters. I didn’t even know that was going to happen until I saw his review. I have to agree, completely stupid.

Still, even if I didn’t agree, it wouldn’t be enough to make me go after this guy. Then again, I’m not a psycho SJW hellbent on crushing all dissent to this supposedly feminist outing.

The Daily Dot had a snarky post and so did Fansided. But so far, out of all the hits I’ve read, Death and Taxes takes the cake for most unhinged and just flat out misleading takes on all this…

“‘Ghostbusters is something we all grew up with,” said Rolfe. “And we wanted to see the original cast back together one last time, while they were still alive, and then maybe introduce a new, younger cast. Work them in. Win us over. And then pass it on for a new generation.”

Kind of interesting how he lets the original cast off the hook, particularly Bill Murray, for continually passing on “Ghostbusters 3″ and thus preventing it from happening before Harold Ramis passed. Instead, all of his ire is directed at the team behind the new movie.

The last point is just complete hogwash, because if you watch the video all the way through, you see that his next vid is going to be entirely dedicated to the failure to produce Ghostbusters 3. Therefore saying he let them off the hook, while true in the case of this video, is complete bullshit. He’s not done yet.

The reaction on Twitter weren’t any better, but they have made me laugh at how goofy these radical are being over one guy’s vlog about a movie that hasn’t even come out yet…

MRAs boycotting #Ghostbusters is genius marketing. You're guaranteeing me I can sit in a theater with no geeks? Can I buy my ticket now?

Is there a new Ghostbusters trailer or are the crybabies just upset again because no one cares about their poor little baby feelings?

Ghostbusters was a part of MY childhood. I own the VHSs, the DVDs, I have toys too, but you don't see me being a petty pissbaby.

Since when has Rolfe been an MRA? What the fuck lol?

He literally said nothing negative about women taking over the main roles, the guy just pointed out how ill-conceived this entire project really is.

Are people truly afraid of female leads more than they are of ghosts? #Ghostbusters

Oh, now it’s because he’s white. I guess I should expect a quote like that out of a BuzzFeed reject like Donna Dickens (pretty sure she is appropriately named, however).

So apparently some people's ENTIRE identity is "I liked #Ghostbusters as a kid."

No. That’s not what he said at all. It’s almost like these people didn’t even watch the video! That’s couldn’t be it…

In the reboot of #Ghostbusters, the team must fight the ghosts of all the sad, angry dudes' childhoods they murdered by making a new movie.

Self-hating beta male? Check. There was at least one person who got it, though…

AVGN just triggered male feminists with the most tame, gentle video about why he doesn't want to watch #Ghostbusters pic.twitter.com/0OiE1LE7JM

White males aren’t allowed to have strong opinions about anything ever again if those opinions differ from the SJW party line. And even if it doesn’t, you’re motives will be questioned. You literally can’t win. 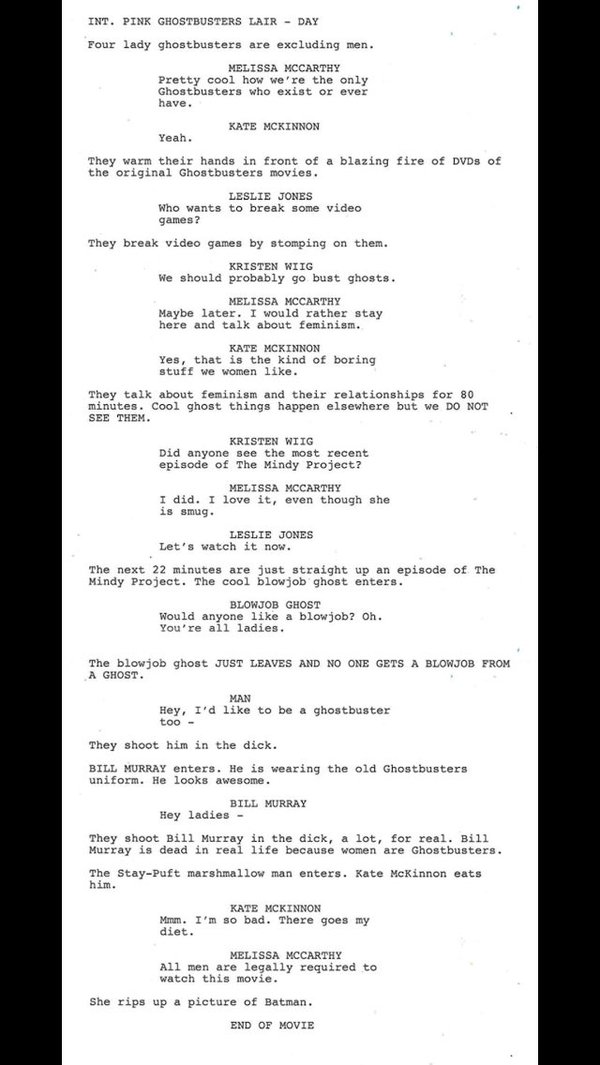