Zoe Quinn Cries About Facebook Recommending Ralph, Blames That on Her Lack of Output

Right before I left for England, I did a post on Blowey Zoe Quinn. In it, I detailed her flagrant disregard for the nation’s blood supply and I also showed you how a legit PhD blew her out of the fucking water. It ended up being one of my biggest posts of the fall. The reason for that is lots of people love seeing virtue-signaling trashbag hoes like Zoe get rekt. I have to say, I’m one of those people, although it’s even better when I’m the one doing the blasting. Yesterday, she took to Twitter to complain about my post, among others.

What was the crux of her complaint, you ask? Well, she seems to be pissed that YouTube won’t let her control what gets recommended on the sidebar of her channel. Of course, it’s not like she pays to join YouTube (no one does). I’m not sure why she thinks that should be a decision afforded to her, but whatever. She’s a disingenuous bitch, so attaching logic to her tweets and public statements is a fruitless endeavor. Still, let’s take a look at what she said. 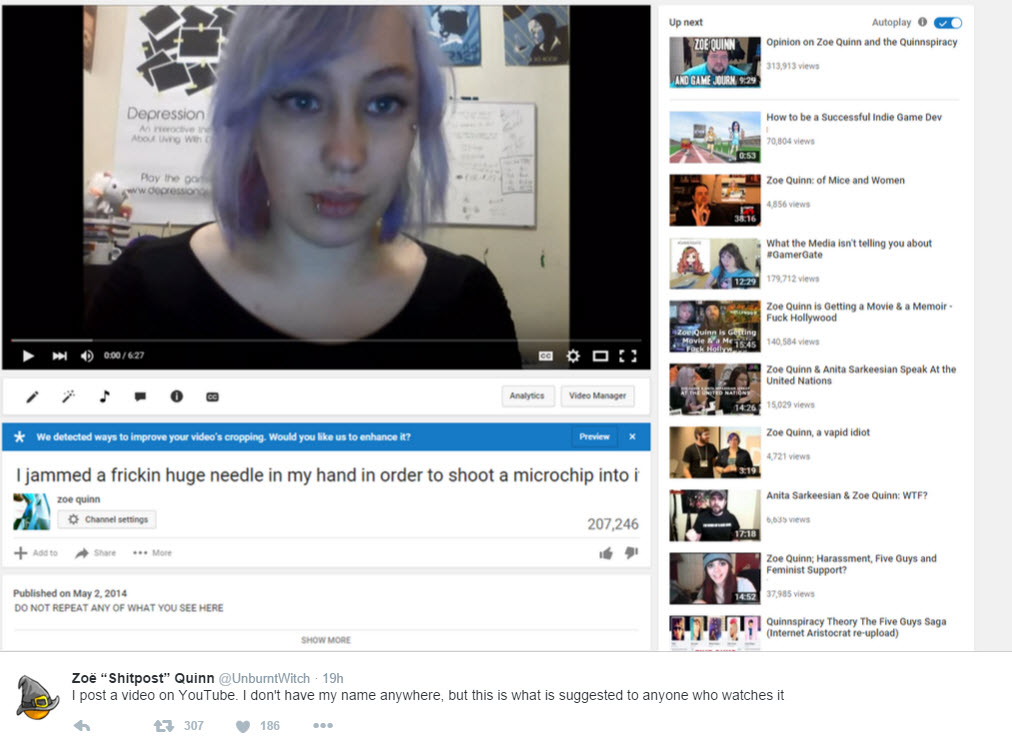 I can understand why she’s less than happy that all her friends are being pointed to my website, but as Randi Harper has said: “You made your bed, now get fucked in it.” But she’s not only complaining about the algorithms that value content like mine. She’s also blaming that for her not putting out any sort of game developing work anymore. Apparently, it’s all about the kids. 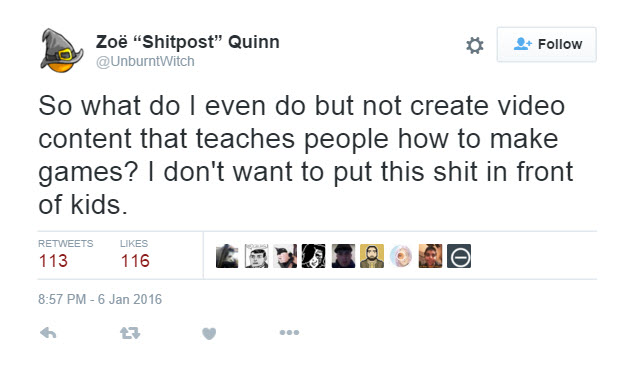 I gotta give the tramp some points for originality, though. The Queen of Queef always seems to come up with a great lie for her mongoloid followers on social media…and they continue to eat the shit right up every time. I know none of you are dumb enough to believe that Zoe has quit doing anything of value because of some mean videos and articles done about her. That makes no sense.

The real reason she’s stopped doing anything of value is because she doesn’t have to anymore. Patreon is keeping her well-fed without any real work. So the lifetime conwoman is able to sit back and collect checks for nothing. It sure must be nice, Zoe. You would think shame might cause her to eventualy do something, but as you know, she’s one of the most shameless people we”ve ever seen. Don’t count on that happening.