Zoe Quinn Says Boyfriend Was Fired Because of Metacritic

Well, I think we may have finally found the reason that Alex Lifschitz hates the AAA industry, along with the gamers who power it. According to disgraced indie developer Zoe Quinn, he was fired from his job because of low Metacritic scores. This explains an awful lot. Now the unhinged rage he showed in that presentation makes sense. He thinks that we ruined his dream. He blames us, and the AAA power structure who listen to the consumer.

Keep in mind, Quinn is responding specifically to a someone talking about USER reviews, not reviews from press outlets. The person said that studios don’t pay attention to those, but was corrected by Ms. Quinn. Here’s the full quote below: 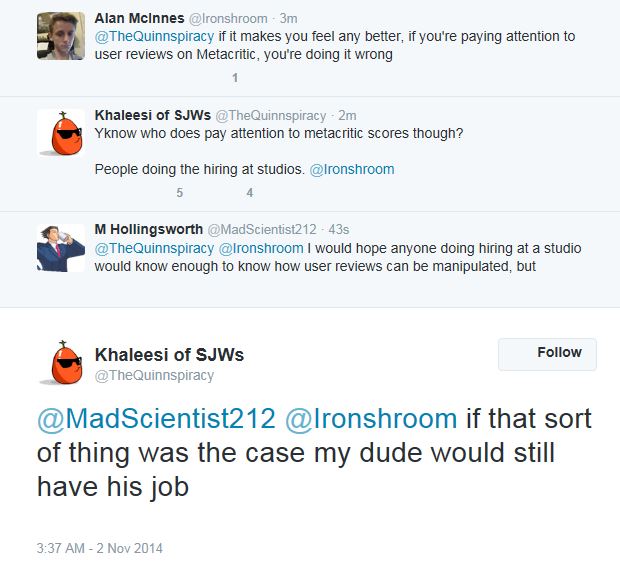 I love how these people keep doing my job for me. It really is pretty nice. Anyway, as you can see, she’s talking about us. She’s angry as well. Even though this rich brat already has access to more money than most of us ever will, she still wants more. Just like Tim Schafer, Alex Lifschitz and Zoe Quinn want to live the good life on your dime, even when they don’t have to. They could live honestly, but choose not to. Some people have to lie, cheat, and steal to get by. These people do it because they want to. It amuses them.

The more you dig into anti-GamerGate, the more you start to see that most of our enemies oppose reform for financial reasons. Some want to change the industry so the games from their shitty circle can cash out. Maybe they want to rig some indie award shows so they can pad their profits further? Perhaps the message board payola will stop? Or, in the case of Alex Lifschitz, you just got flat out fired from your job. All these are actually fine reasons to oppose us. Crooks don’t usually cheer on the police. And anyone can understand losing their job. However, carrying on a years long jihad against gaming because of it, is a little harder to comprehend.

Snap out of it, Lifschitz. I’m sure Daddy will pay for all the therapy you need.