Zoe’s Congresswoman Pops Off Once Again, Calls Self Proud SJW While Trolling GG

I have no idea what this idiot congresswoman from Massachusetts is trying to do, but I do have to admit, it’s quite amusing. For some reason, she decided to troll GamerGate earlier today. I’m not sure what sparked it. Maybe it was the Ellen Pao op-ed I’m going to talk about here in a minute? I have no idea, to be honest with you. It seems kinda odd for a sitting congresswoman to be playing on Twitter all day, but maybe that’s just me. Anyway, let’s go ahead and check in with the clueless Katherine Clark. How many words can you really waste intro’ing this useless husk? 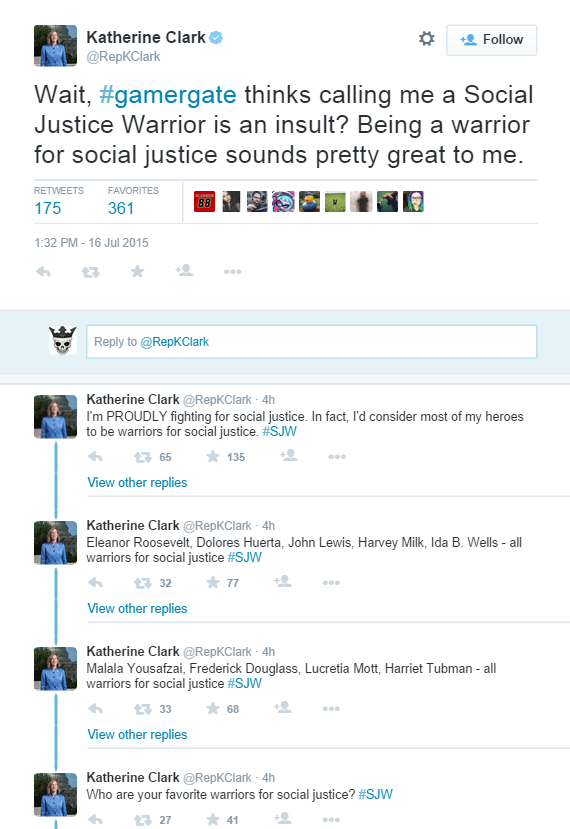 First off, we’re not talking about those people when we talk about SJWs. The term has a very specific meaning, and it was around well before GamerGate. What does it mean, you ask? Here’s the accepted definition:

A pejorative term for an individual who repeatedly and vehemently engages in arguments on social justice on the Internet, often in a shallow or not well-thought-out way, for the purpose of raising their own personal reputation. A social justice warrior, or SJW, does not necessarily strongly believe all that they say, or even care about the groups they are fighting on behalf of. They typically repeat points from whoever is the most popular blogger or commenter of the moment, hoping that they will “get SJ points” and become popular in return. They are very sure to adopt stances that are “correct” in their social circle.

It’s not even about left and right, even though most of these SJWs do identify as radical leftists. But there are those on the far right who want to restrict my entertainment or curtail artistic choice. It’s authoritarianism and puritanism is what it is. Whether you’re doing it for Jesus or for political control and advancement, it’s still fucking wrong. So her trying to turn it into a left vs right thing is bullshit. I’ve been fighting people who are mostly on the left, yes. But I don’t believe they represent the majority of rank-and-file leftists. Polls show that support for feminism stays mired in the 20s. They don’t have the majority among the American people, but they hold sway among journalists and politicians. That’s why you see them continually using those two levers of power to push their agenda. It’s the only way they have a chance.

As you can see, I hope the Congresswoman Clark faces a stiff challenge in 2016. Since she’s in the House of Representatives, she has to have an election every 2 years. Maybe that’s why she latched onto this garbage in the first place. Cheap publicity can come in handy in her line of work. She’s attached herself to some really unstable people, though. We’ll see if it blows up in her face. Regardless, I’m going to hope for some scandal to sink her, or another Democrat to step up. The seat has been held by Dems for around 40 years. So I doubt it will be going Republican anytime soon. We’ll keep an eye on it, nonetheless.