I can now report, that Olympus, the high-end camera company, has officially withdrawn support from Gawker Media. I saw this floating around on Twitter earlier, but I was busy on a story, and couldn’t confirm. Now that I’ve checked my email, I feel confident in bringing this to you. The person who sent it is a known GamerGate supporter, and the original is in our possession. It’s legit. Gawker has taken another blow.

“I am writing to tell you that Olympus (the camera-maker) wrote back to me to inform me that Olympus has pulled ads from Gawker Media.”

This news means advertiser loss is a growing trend for Gawker. Two are confirmed gone, and we don’t know the situation with Mercedes. So, it might be three. Either way, it seems like all their partners are reevaluating their relationship with Gawker, and their tainted sister-sites. That’s not surprising. As most people already knew, advocating for the harassment and bullying of nerds, is not good PR for a media company like Gawker.  Oh, did I mention this happened during National Bullying Prevention Month? LOL, not a good move. Why not call MLK Jr. the n-word during Black History Month? That’s the only way I can think of to top this colossal blunder. 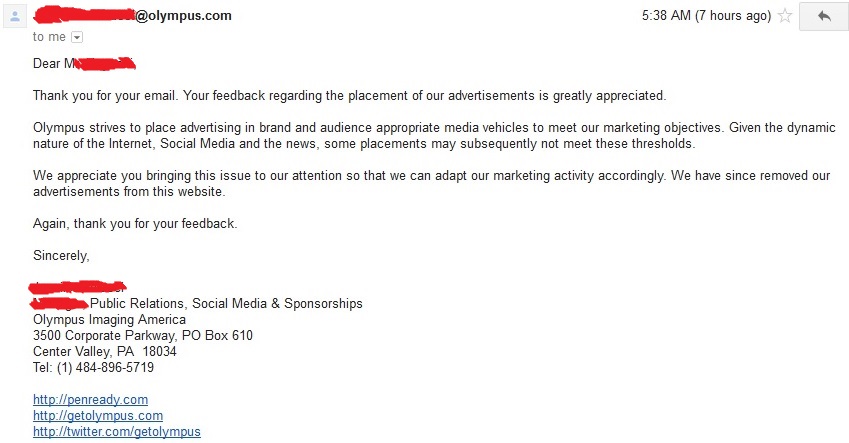 Despite all the hand-wringing about tactics, and a sustained assault from every corner of the mainstream media, GamerGate continues to rack up victories. Gawker’s mistake last week has left them very vulnerable. Continue the assault. Give them no quarter. Here’s a thread with all the current advertisers on the site. Email until your fingers bleed. They’re on the run, but we still have lots of work left to do.