I woke up yesterday morning and wondered why my old Kyle Rittenhouse tweet was getting some attention. It was made all the way back in November, for fuck’s sake. Why would anyone care about some old tweet of mine back in the fall, outside of the pathetic [REDACTED] Family and their legion of psychopathic cucks? These were actual people clicking like, though, not humanoid husks masquerading as real human beings. So, I was intrigued. I said as much on the Sunrise.

The tweet in question had a video embedded in it. It shows Cenk Uygur, blighted host of The Young Turks, in all his slanderous glory. He says Kyle Rittenhouse went to Kenosha on that fateful night to “shoot black people.” Unbelievably, he somehow makes it even more blatantly false by going on to say that the right wing cheered Rittenhouse on and financially supported him because he went there with murder on his mind…the murder of black people, specifically.

Actual defamation by Cenk Uygur. Make sure one of Rittenhouse's lawyers sees this! pic.twitter.com/CQ2dxEGaUQ

As you can see, I wanted Rittenhouse’s lawyers to get a look at this back in November. So, why was there so much commotion around my tweet today? I knew something had to be going on, at least with my tweet itself, if nothing else. Maybe it got linked in an article, or something? I had no idea. I couldn’t really understand it, until…

During last night’s Killstream, we found out that Kyle is launching The Media Accountability Project. Here’s the announcement that was made live last night on Tucker Carlson’s Fox News program.

Now, if you watch the clip, you see that Rittenhouse specifically mentions Cenk Uygur by name as being on “the list.” But, he doesn’t seem to get the full flavor of his comments. Not only does Cenk insist on calling Kyle a murderer, he also goes out of his way to falsely claim that the Kenosha Kid went there specifically to kill black people.

Thankfully, we no longer have to worry about Kyle missing the entire mendacious meal from Cenk, because a couple hours ago Rittenhouse actually replied to my original tweet…the one real human beings were liking again yesterday morning…with a one-word reply. 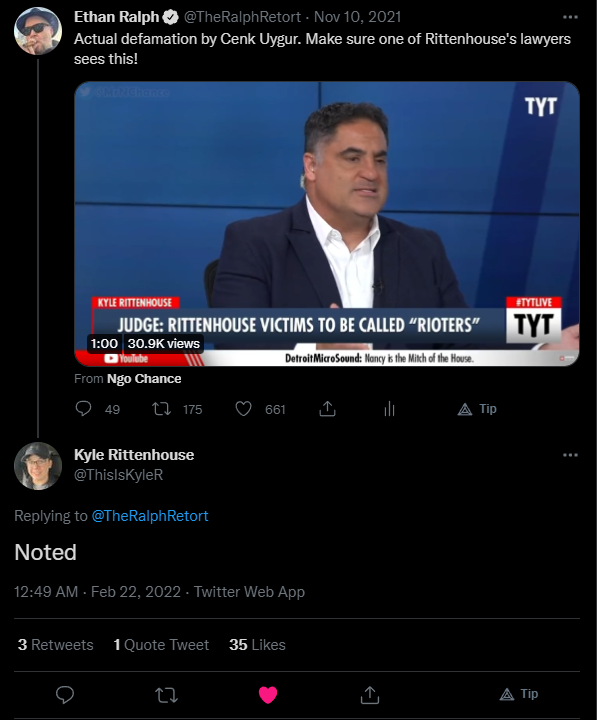 Sue this fucker into the ground, Kyle.

What must it be like to live in abject fear? Not the…