Meet Alison Downie, the Leftist Professor Destroying a Kid Because He Said There Are Only Two Genders

Another day, another travesty going on at one of our nation’s institutions of higher learning. This one is particularly galling, however. Lake Ingle, a student at Indiana University of Pennsylvania, has been barred from class and could be prevented from graduating all because he told nutty leftist professor Alison Downie that, according to biologists, there are only two genders. Oh, and he disputed the wage gap myth with, get this, facts and figures! 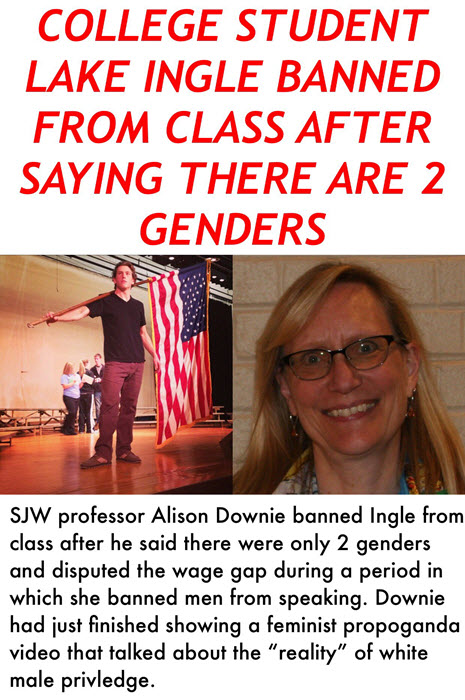 No wonder he pissed this loon off. From Campus Reform…

According to Lake Ingle [the student in question], the class was forced to watch a Ted-Talk on February 28 featuring Paula Stone, a transgender woman, who gave examples of “mansplaining,” “male privilege,” and systematic sexism. Following the video, Ingle wrote that the instructor “opened the floor to WOMEN ONLY. Barring men from speaking until the women in the class have had their chance to speak.”…

“The floor was opened, and not a single woman spoke. Thirty seconds or so passed and still no woman had spoken. So, I decided it was permissible for me to enter the conversation, especially because I felt the conversation itself was completely inappropriate in its structure,” Ingle told Campus Reform. “I objected to the use of the anecdotal accounts of one woman’s experience to begin a discussion in which they were considered reality. It was during my objection that Dr. Downie attempted to silence me because I am not a woman.”

Here’s that Ted Talk, by the way:

As a result of Mr. Lake having the nerve to counter leftist lies, he was handed this. An associate of my site was also had these documents sent to them, but they’re all in the Campus Reform post. 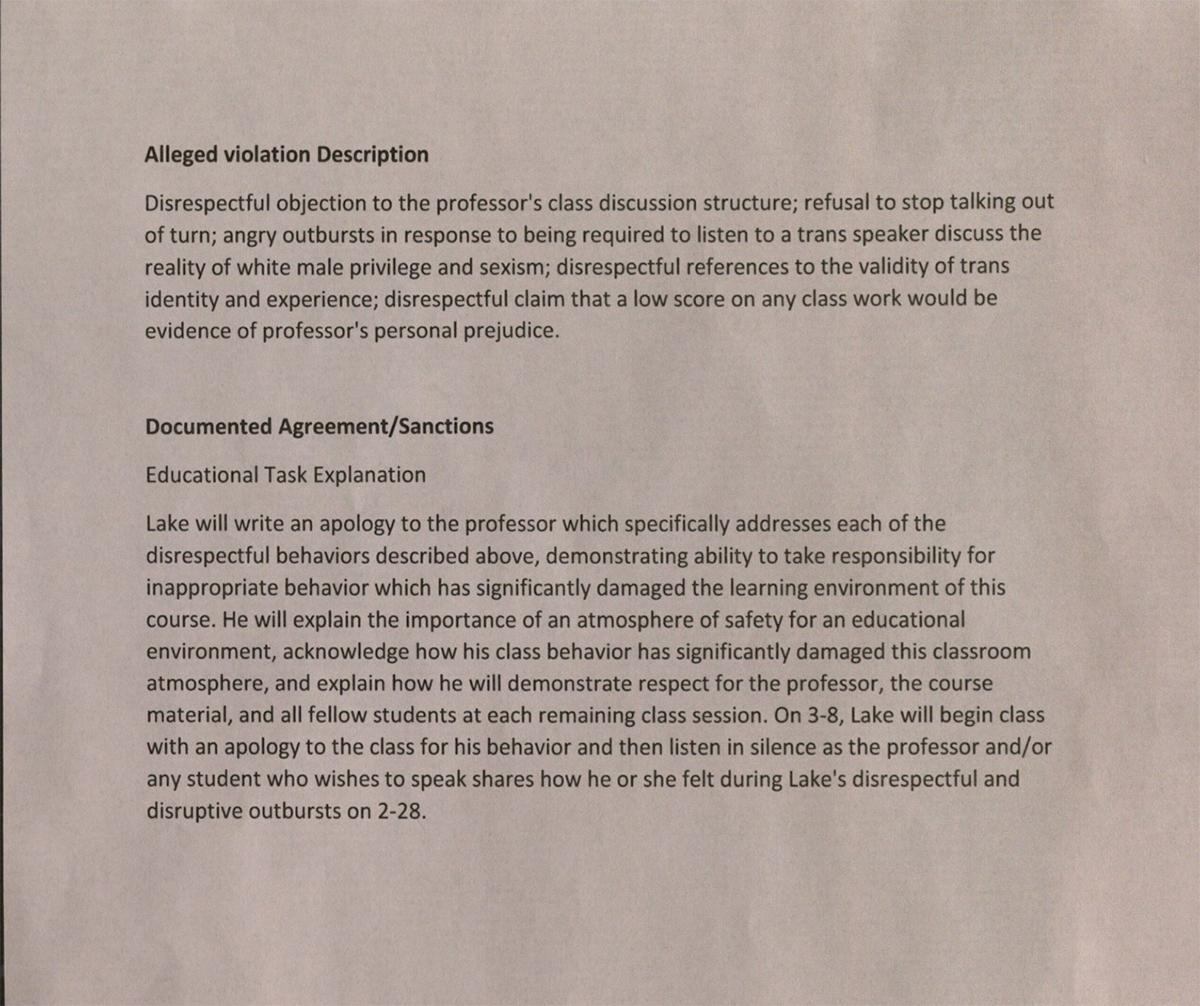 As you can see, the “professor,” Alison Downie, is trying to force him into an apology because he turned the class into an “unsafe space” with his brazen disregard for SJW bullshit. Then, he’s supposed to sit there and be berated by Ms. Downie and her braindead followers like some kind of Maoist struggle session. This is the sort of Marxist indoctrination that’s happening in colleges across the country.

Speaking of the professor, she is quite the character. My team found some of her writings, and they are just as batshit as you might imagine. Here’s the abstract from a paper she wrote titled “A Spirituality of Openness: Christian Ecofeminist Perspectives and Interreligious Dialogue (full paper in link)”…

Feminists have critiqued assumptions and structures of inter-religious dialogue even as they have acknowledged the need for more feminist presence in this area. Because ecofeminist values span religious differences, exploring a spirituality evident across Christian ecofeminist authors makes a contribution to inter-religious feminist work. A spirituality of openness manifests in four prominent themes which recur across diverse Christian ecofeminist thinkers. Each of these themes arises from a foundational orientation to openness. Relational theories of self are grounded in the openness of fluid identity construction; a stress on personal narrative as a relational way of knowing depends upon the openness of experiencing subjects to each other; an ethic of risk and discernment emphasizes openness in the courage and responsibility required to act within ambiguity; and the openness of receptivity is a prerequisite for engaging the potentially transformative power of beauty.

What the hell is an “ecofeminist?”

Ecofeminism is a term that links feminism with ecology. Its advocates say that paternalistic/capitalistic society has led to a harmful split between nature and culture. Early ecofeminists propagated that the split can only be healed by the feminine instinct for nurture and holistic knowledge of nature’s processes. Modern ecofeminism, or feminist eco-criticism, eschews such essentialism and instead focuses more on intersectional questions, such as how the nature-culture split enables the oppression of female and nonhuman bodies. It is also an activist and academic movement that sees critical connections between the exploitation of nature and the domination over women both caused by men.

Oh, so calling yourself an ecofeminist means you’re a complete nutbag. I’m glad I learned about this particular strain of psychotic thought. You can read more here. You can also read some of the non-scholarly (lol, it’s a joke to call the trash above scholarly, but play along with me) work Alison Downie has done.

As you can see, she’s an unhinged, man-hating shrew. This post almost defies belief.

On this particular Sunday, I happened to drive past a non-denominational church in the small college town where I live. It rents space on the main street, in an old movie theater. On this day, a group of enthusiastic church goers gathered on the sidewalk, advertising the service about to begin with handmade posters. They appeared to be mostly young, and I imagined they were probably students at the university where I teach. I glanced their way, wondering if I would recognize a student from one of my classes.

A young man I did not recognize leaned toward the curb as I passed, aiming his poster at me. It read, “SMILE! It’s Sunday!”

I felt slapped in the face, stunned, and then . . . enraged.

ENRAGED by a proselytizer who wanted to brighten someone’s day with a happy sign. What a monster that kid is!

Though I drove on in steely silence, I wanted to slam on the brakes, storm into that cluster of shiny happy young people and throw down a Molotov cocktail of sudden death, mental illness, tragedy, and suffering of all kinds into their church street party: “NO! I will NOT smile because it’s Sunday. And who are you to tell me I should? Who are you to imply that if I do not smile, I somehow don’t measure up to your understanding of what faith or salvation is?”

Rage boiled within me for miles and miles, churning over the shame these young people tossed around in an insular, and therefore, arrogant obliviousness.

This woman is entrusted to enrich young minds. Our country might be beyond redemption at this point. OK, I don’t really believe that, but with folks like this teaching kids, we have a lot of housecleaning to do.

More, from her batshit rant…

In a classroom, in my professional life, I’m perhaps hyper-vigilant in preventing potentially shaming exchanges. Student feedback tells me my Religious Studies classes are safe spaces. Yet I keep myself safe by operating only out of my intellect, employing analysis and critique in the third person.

In the classroom or while writing an article, I know how to keep myself safe. I patrol very clear boundaries. And over several decades, I have developed effective strategies for replenishing myself when shame overtakes me in situations beyond my power to orchestrate.

In that Sunday smile poster, all the smug, self-righteous, condemning religiosity which formed me in shame as I learned to talk, walk, and never break a rule, assaulted me once again, as Alison, not Dr. Downie. I wish I could imagine talking to that group without my professor-shield. Volunteering to walk right into shame, to walk right into a crowd pronouncing that I am religiously inadequate, has, so far, exceeded my abilities.

I hope that one day, perhaps even in the coming New Year, I will have the courage and strength to walk squarely into a poisonous cloud of shame, to risk being vulnerable, perhaps to teach more by how I live as Alison than how I structure classes as Dr. Downie.

I don’t know Alison, or Dr. Downie, but they both sound like complete headcases to me. How many psychotropic drugs do you imagine this woman is on? However many it is, perhaps the dosage needs to be altered. They clearly are not working.

More on this story as events develop.

UPDATE: Mr. Ingle has provided TheRalphRetort.com with a comment about the hearing that took place today…

Today, at the hearing, the professor filed for me to be removed from class, permanently, due to the Classroom Disruption Policy. She’s claiming my presence in the class is making the classroom unsafe because of the manner in which I share in class. Her decision to do this is a direct reaction to my comments in class on February 28th.

A final decision on Ingle’s status is expected to be made on March 19th.