Wow, what a fun Sunday. We have the RogueStar roast on Friday, and some other various fun things planned for the week. But first, let’s talk about #BlackLivesMatter and the scammer Shaun King. Even by BLM standards this guy is a fucking fraud. Now, his former allies are calling him out in the worst ways possible. They’re even making fun of his phony black man status now. Master Milo has the main article up, but this was so funny that I had to do one myself.

Here are the particulars from Milo himself…

“Senior justice writer” Shaun King, who recently sent this correspondent perhaps the most remarkable email in the history of right of reply, was just thrown under the bus by Deray Mckesson and other prominent BLM activists in a series of tweets drawing attention to alleged mismanagement of funds.

This is just the latest in a series of scandals for race-baiter King. Breitbart was the first media organisation to raise questions about Shaun King’s race that have still not been answered. Although King claimed for years to be biracial, after our report he was forced to admit he had no idea who his father was and that both of the people on his birth certificate are white.

He listed a lot of the beatdown tweets himself, but here are a couple he left out (plus some he included)…

OUCH, calling out the white boy status explicitly. That’s gotta hurt for this white bread ass motherfucker What caused all this in the first place? Here’s the deleted tweet from King? 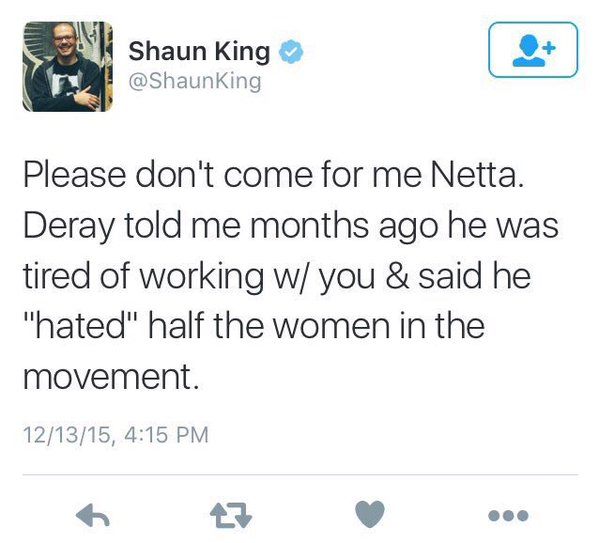 I'll keep this brief, but I'll begin by saying that @ShaunKing blocked me when I asked questions re: planning/money re: JusticeTogether.

I'll keep this brief, but I'll begin by saying that @ShaunKing blocked me when I asked questions re: planning/money re: JusticeTogether.

I personally was done with Shaun when he twitpic'd a photo of Rekia Boyd in her hospital bed. No respect for her or her family.

Lmao Shaun King is totally gonna come back w/a telenovela that rivals even his origin story. He's wasted on us tbh. He needs a Univision gig

So I've convinced myself that Shaun King is a bought-and-paid-for plant that runs counter to Black Lives Matter. He's an ambulance chaser.

"Whatever happened to the money you raised for JusticeTogether?"

Shaun King: "Money? Who said something about mo.." pic.twitter.com/NyE3Xv8zOO

LOL now they're accusing Shaun King of colluding with @Nero!!!

FUCK THIS IS A GOLDEN DAY https://t.co/USYwDzGci0

Holy shit, I could keep going, but I really need to publish this post while the shit is hot. I’ll come back later and add some media links and extra tweets. Until then, go on Twitter and enjoy the fireworks! Shaun King is trending!! HAHAHA!!