Last time, we took a look into Leigh Alexander’s past. But I didn’t put everything out there. Today, I wanted to show the rest, with a focus on longer answers. We took a short look at what her friends thought about her last time, but what made them feel so negatively? Many of the people interviewed had a lot to say. So, I’m just going to let them say it, with sparse commentary from myself (until the end).

Here’s a quote from ZP, one of the few people who thought Leigh actually believed in what she was doing:

I think it’s a coping mechanism, you have to buy-in to what you’re doing –otherwise you have a massive breakdown. Your entire life is a lie, and everything you do is meaningless, years of your life has been wasted etc, etc.

One person who had an awful lot to say, was AM. I quoted some of that during the last article, but only a little. Here’s the majority portion:

Her defense mechanisms were to make everything a personal slight and to make people believe that, no matter the circumstance, she was being victimized for being new, a girl, non-conforming, or generally different—the specific reason she was actually very good at tailoring to a particular moment. It was a shame, though mostly in retrospect, that I remember so much of that when she could be a very approachable and entertaining writer when she didn’t have to react to other people’s stories and characters.

We were all abusive to one another, so I can’t say she was any more so than any of us.  We trash talked and insulted one another in one window while we wove some of the most fantastic stories together in another.  The difference is that Leigh did the first in both windows. With only one exception, I can’t think of anyone who disrupted more role play in our time
playing together than Leigh. Her presence had a muting sensation on role play in general.

Did I ever think Leigh Alexander would become a critical games journalist? Is she now?  I played video games professionally for years, and I had never heard of her except in passing.  It’s hard to keep up with people you don’t really care about.  What I can say, though, is that I believe she’s “there”. She was manipulative as a teenager, and it bought her attention and friendship, so I have no reason to believe she wouldn’t continue to manipulate internet culture in the same way.  I hate to say that it’s because she’s a woman—in fact I shouldn’t say it at all, but we have to face facts.  Every young boy on the internet in the early 2000s, with very few exceptions, was pining for the attention of young girls. Remember how I said that we were all socially inept?  Leigh may not had been at all. She’s a smart woman.  She was a smart girl.  She knew how to wrap and rally the likes of (Trent Mercy) and (Vlad Meiru) to her defense, no matter her cause, and it’s no different now. “Look at how they attack me because of something that happened ten years ago!” she’ll cry.

I know that she called me fat and ugly. Better than illiterate, I suppose. I know that she cost me a few friends, not all of which I got back, but I know she’s indirectly responsible for me making a few too.  Her kind of wretched abuse works two ways. What do I have to say to her today?  I would tell her to remember who she is, but honestly.  I think that’s the problem.

Here’s more of what GT had to say about Leigh’s opinions on GamerGate and gamer culture:

I’ll wrap it up with some final thought’s from the Unprofessional <a< span=””> href=”https://twitter.com/unpromadman”>Madman, who actually has more nice things about Leigh than anyone else:

Leigh has always been a kind of outlier.  She was very
cliquish despite seeming like she always wanted to be part of the “in-crowd.”  She would often, intentionally, ride that line between being part of the group and not — usually when it suited her.  The difference between how she was then and now is that, evidently, she’s taken a side and has fully embraced it as her surrogate reason for living.  I’m sure it helps that she can use it a a platform to talk about her up and coming book.

Leigh, to her credit, has always treated her friends very well.  She would later go on to rekindle old friendships and relationships with many of us long after we left the fold of AOL role playing.  To be clear, she has done nothing wrong to me.  She never has.  Last we left things, we were very friendly with each other and shared many intimate aspects of our lives to
each other, none of which belongs here in this discussion, by the way. I still respect that, at least.

I feel like she’s way past the point of no return.  She is not going to admit to being wrong, ever.  To do so would mean that she’d have to fess up with herself and to all of her followers that she’s gone overboard. She was never the type to apologize for being wrong, and I feel like that hasn’t changed.

So with that in mind, maybe it’s time to leave games journalism.  Maybe it’s time to go fully into the direction of writing for the ideologies and themes she’s adopted — just leave it out of games, or at least, write about it without being knee-deep involved in “games journalism” like she is now.  Maybe write about those things as someone who acknowledges and
discloses her opinions.  Maybe go the Anita Sarkeesian route as a full blown figurehead rather than continuing as a self-professed megaphone pretending to write as “just another journalist.”

One way or another, her role in this is going to change.  Whether it’s ofher own accord or not.  There’s no way that things are going to stay thesame for her when this is all said and done.

Now that Leigh’s friends have had their say, allow me. The other day on Twitter, Leigh said I was a “one note creep.” I actually thought this was pretty hilarious, and considered making it a slogan. I actually have no ill will towards her, as crazy as that may sound to some. It’s just what has to be done. I think she been a abusive person, who has said hateful and racist things. These things would have gotten anyone else fired. You simply can’t be in her position, do the things she’s done, have the conflicts of interest she has, and continue on without being challenged. 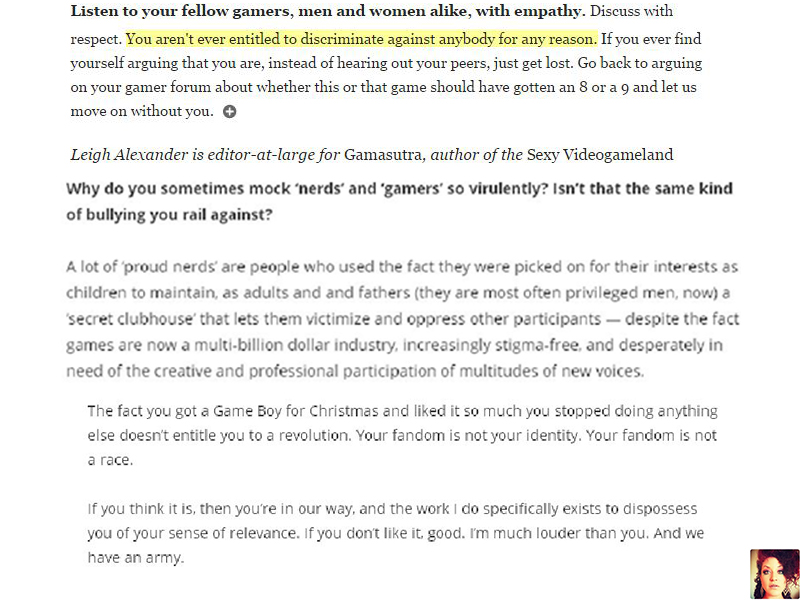 And guess what? We weren’t the ones who did the the original challenging. She was the one who declared war. I knew that day what had to be done. We had to fucking fight. I didn’t fully know what a rotten person she was then, of course. But I knew she had to be countered. That’s all it is. I didn’t seek this battle out. It found me. Never forget, this was years in the making. The Leigh’s of the world sought us out

I hope you continue enjoying the site, Leigh.