LEVELING UP? Richard Dawkins Goes After The Block Bot & Talks About GamerGate

You slept late on a lazy Sunday? Not to fear! So did I, unfortunately. Hopefully the two pieces we worked on last night kept you satiated. We’ll have the usual slate of news and opinion today, with an Arthur Chu piece sometime this evening. It’s been awhile since we’ve talked about our old friend. There’s some new things about him that have come to light, including some old writings that show how SJW thought rotted his brain. But this article isn’t about that shitbag, it’s about Richard Dawkins, who is one of the leading public intellectuals of our time. I usually use that phrase word mockingly, since so many of the people who seek that status (like Chu) are severely lacking. But this guy actually is.

In case you missed it earlier (and you did if you were a lazy fucker like me), he has joined the chorus of those calling out The Block Bot. Recently, the creators of that monstrosity have said that they were going to wind it down, and transform it into something less potentially illegal (perhaps). They haven’t yet done so, however. Breitbart’s Allum Bokhari has a great write-up of the situation. Here’s an excerpt from it:

Known as “The Block Bot”, it claimed to list “trolls, abusers, and bigots” on its “Level One” block list. In reality, many of the people targeted by the Block Bot were political critics and sceptics who disagreed with its creators’ hardline progressive beliefs.

The Block Bot was created in the context of the “Atheism Plus” controversy, a schism within atheism and scepticism movements dividing those who wanted to inject feminism, “anti-oppression,” and social justice into the movement, and those who wanted to be as sceptical of political ideologies as they were of religion.

Many of the people listed on the blocklist as “bigots and abusers” are in fact atheist commentators who disagreed with the mission of Atheism Plus, such as popular YouTube commentators Phil Mason, Mykeru and the blogger Skepdigger…

Twitter accounts added to the Block Bot contained a staggering number of journalists, academics and public figures. Equity feminist Christina Hoff Sommers, physicist Brian Cox, and evolutionary biologist Richard Dawkins were all added to “Level Two” of the list. Its “Level One” list (reserved for the so-called “worst of the worst”) includes a host of parody accounts, bloggers, and journalists – including Breitbart London’s Milo Yiannopoulos.

Here’s one of the odious people involved with The Block Bot operation talking shit on Twitter, calming the fears of the unbalanced users of the service:

Here’s a screenshot of their website announcement, talking about their next phase. These fascists aren’t going away. They’re just trying to come up with a new twist: 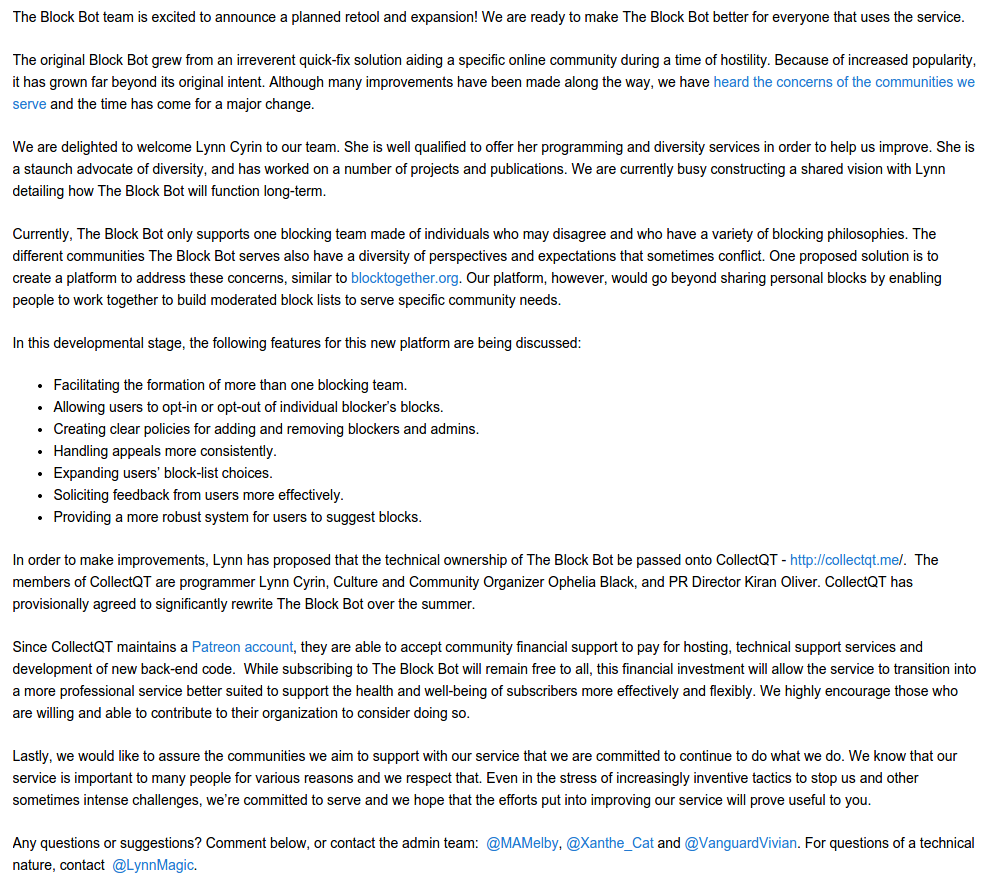 So, now that you know a little bit about The Block Bot, let’s talk about Dawkins. Earlier today, he started questioning the labeling of those on the list as bigots, abusers, etc. As the Breitbart article pointed out, this list was passed around the media, it’s operators were quoted on the BBC saying nasty things about those on it, etc. It’s not just the act of blocking, as Dawkins rightly points out. It’s the potential libel:

Anyone know what this is all about? “Block bot runs into legal trouble.” http://t.co/zEme9dnFFt

@paxlynx I know nothing about Breitbart. I only know they alerted me to a blockbot which seems to libel me.

As you can see, Dawkins seems to be having fun lol. He continues (these are RT’s by him as well):

@RichardDawkins not quite. Development & hosting is being handed over to a bunch of loons in the US following poss legal action threat

@AmyDentata So I understand, and that sounds laudable. But then why have the likes of Brian Cox and me been included? Libelled?

To show you what kind of person Amy Denata is:

Back to Dawkins + RT’s before we finish up:

Deemed by whom? Some petty little Inquisition? Some poky little Thought Police? When have I ever harassed anyone? When has Brian Cox?

I have no objection to being blocked. Please block me if you wish. What I object to is being libelled, and linked with spammers & harassers.

@RichardDawkins @thewtfmagazine You have to realize that these people literally defne harassment as "disagreeing with them".

People are confusing the act of blocking, with libelling those blocked. Blocking is fine. Block me and I won’t miss you. Libelling is not.

@AmyDentata @Cl0udStrifeFF7 I don’t know the legal definition of libel. But calling me racist, transphobic etc is LYING & I don’t like lies.

Blocking is not censorship. Others are still free to read what you block. Publishing lies about those you block is nasty & perhaps libellous

I know so little of Gamergate I don’t even know which side I’m presumed to be on. I DO know I object to having lies told about me & others.

He doesn’t know much about GamerGate, but he doesn’t like liars. I’m pretty certain which side Mr. Dawkins will come down on, then. Even if he doesn’t get down into the dirt with us, this was a magnificent episode that got our effort out to a huge mass of people. Not only that, it showed just how nasty our opponents really are. They created a mass block list with potentially libelous labels in order to live out Orwellian nightmares. It’s disgusting and shameful. I’m appalled that any media would support this, but unfortunately not surprised. The more people that can be shown how wrong this all is, the better.