I woke up around 3am to another unfair Twitter suspension. This time it was the well-known conservative blogger Robert Stacy McCain. I’ve yet to see the rationale behind this, and according to this tweet, neither has Mr. McCain himself. This sort of thing is becoming all too common and I have to figure it’s only a matter of time until I am suspended myself. I try to be very careful on there nowadays, but it’s becoming increasingly clear that isn’t enough. Still, I’m not going to make it easy on them.

The hashtag associated with McCain’s suspension (#FreeStacy) was actually allowed to trend, at one point, but as Mike Cernovich points out, now it won’t even autocomplete. That’s one of the tools Twitter has been using to slow down hashtags, as of late. GamerGate no longer autocompletes, either, even though several anti-GG hashtags do.

According to tweets, #FreeStacy was quickly removed from the trending list. How many times are these anti-speech SJWs at Twitter going to rig the game? I suppose that’s just the new state of play when it comes to the service. It’s disappointing to see, but that’s just the way it is now. All we can do is fight back by publicizing their failures and trying to keep our accounts going as long as possible. I’m not one of those people who say we should leave without a fight, even though I know that mood does exist among some. It’s understandable, but still wrong, in my opinion.

R.S. McCain seems to agree, as he is still tweeting under the account he setup for his book, @SexTroubleBook. 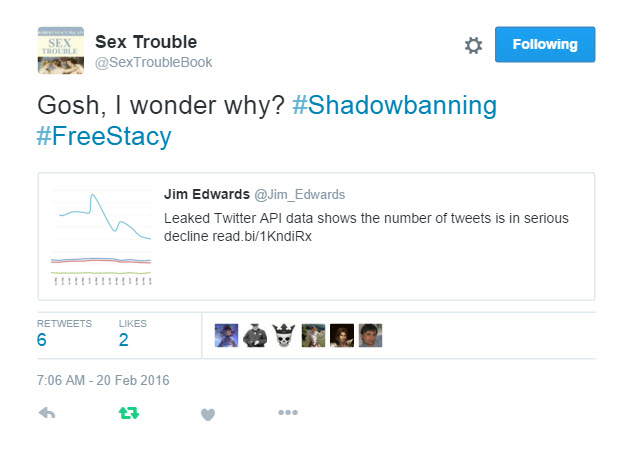 SJWs will likely continue to get away with almost anything they want while conservatives and free speech advocate will continue to be silenced. Twitter keeps the rules opaque so that they can ban anyone at anytime. I will continue to try to spotlight their censorship and fight them hard on their own turf. There’s also the possibility they will surprise us all and restore Mr. McCain, but I won’t be holding my breath on that one.