Psycho Argentinians Kill Baby Dolphin So They Can Take SELFIES

Yes, I realize that I called these shitheads psychos in the title instead of idiots. But after you read what happened here, I will explain why I’ve come to this conclusion. Of course, you do have to be an idiot to not realize that dolphins have to, you know, staying in the water in order to continue living. Apparently these drunk tourists didn’t even know anything about the species. One would think that might be a good reason to leave it alone and not try to pose for pictures with it, but alas.

A young dolphin has died after beachgoers took it from the sea to pose for photographs with it. Huge crowds gathered around the small animal on the beach resort at Santa Teresita in Argentina after one man picked it up. But it appears it quickly overheated and died while out of the water. It was still being passed around by the beachgoers after its death and was later left discarded in the sand.

The photo makes me angry every time I see it: 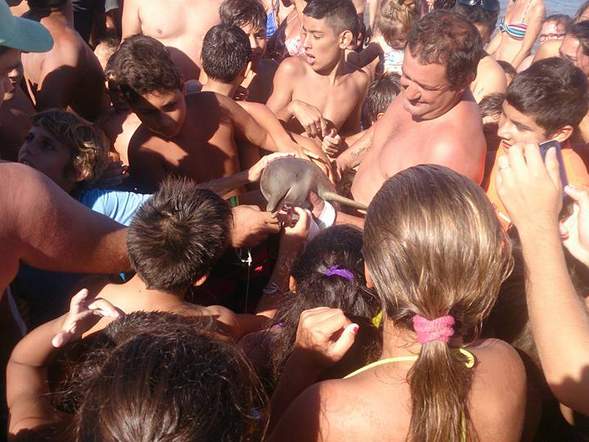 The reason I call these people psychos over idiots, even though they’re both, is because you have to be a nut in order to take a young dolphin out of the water in order to pass it around and take pictures of your fat, drunken face while holding the dying creature. What on earth is wrong with these people? There simply has to be some kind of psychosis here. If you were gonna do anything you could have just given it a pet while it was still in the water and moved on. I imagine they had to wrestle with it a little bit to get it up out of the ocean. Total insanity.

I can only imagine the pain the poor creature had to go through. Dolphins are extremely smart, by the way. Plus, as you read, this particular type was especially rare. I guess at least these nutters got their fucking Facebook photo, though. That’s the important thing. I don’t know what laws they have against this sort of thing in Argentina, if they have any. If they do exist I would hope authorities are pouring over this tape and getting ready to file some charges. The ringleaders of this heinous crime definitely need to be made an example of.