If you follow my activities over on YouTube, then you know I’ve started a little series called SJW Insanity. That being said, I haven’t made a new video for the aforementioned series for about 7 weeks or so. The reason being is that I wanted to pick someone who has been deprived of the limelight that they so rightfully deserve. I’ve had my eye on the person I’m about to identify for quite some time, and the reason she’s come up today is that I saw her last night mingling among the terrorists in San Jose. 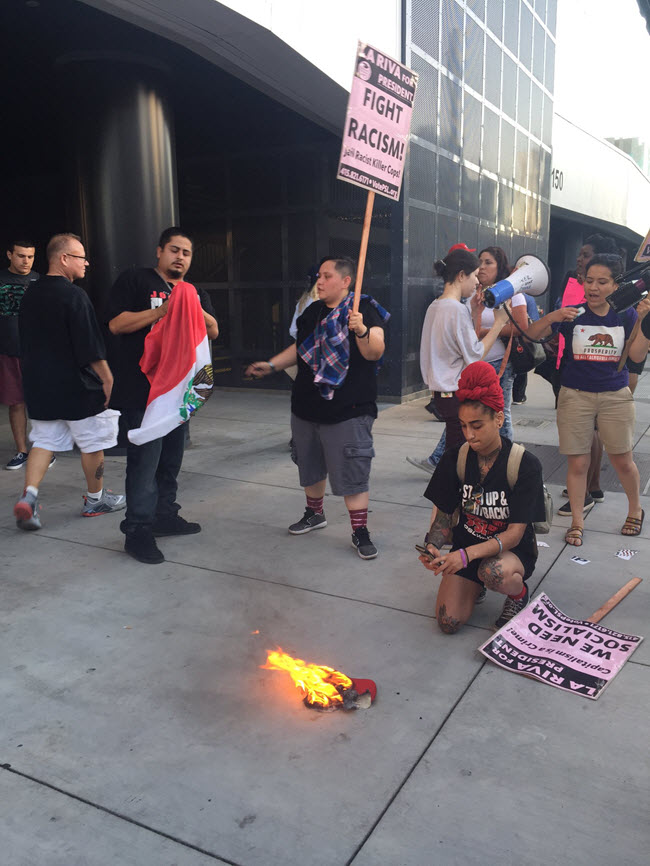 Gotta get that perfect shot for Instagram. How Westboro Baptist Church of you.

Here’s how this vermin, who goes by the name of Maile Hampton, described the festivities last night… 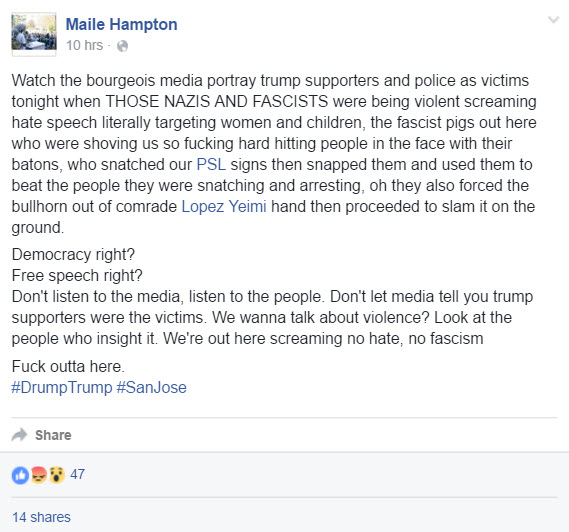 Yea, you guys looked REALLY peaceful. Taking snapshots of burning merchandise that you stole, egging defenseless women in the face, bloodying multiple people who were just there to attend a rally…this is the very definition of peace! The more digging you do on this women, the more you see what a Looney Toon she really is. Last year, she was charged with “lynching” for trying to pull one of her thuggish co-conspirators away from police as they were trying to make an arrest.

A 20-year-old Sacramento woman who has been charged with “lynching” for her alleged actions at a January protest will return to court at the end of the month.

Maile Hampton was scheduled to enter a plea Thursday to the charges against her, which include the unusual and controversially named charge of lynching, which refers to the crime of trying to free a prisoner from police custody in the middle of a “riot,” or two or more people threatening to disturb the peace, according to California law.

The indictment of Hampton, a biracial woman, on the so-called lynching charge caught the attention of Sacramento Mayor Kevin Johnson, who announced at a City Council meeting last week that he and state lawmakers have successfully lobbied to have the word removed from the California Penal Code.

The lynching charge ended up getting dropped, unfortunately, and I couldn’t find out what happened on the misdemeanor resisting arrest charge that remained. I’m assuming not much, since she’s been out agitating violence every chance she gets.

Oh, wait. I forgot something very important, you guys! We’re not supposed to call Maile “she!” It has an important message for us all… 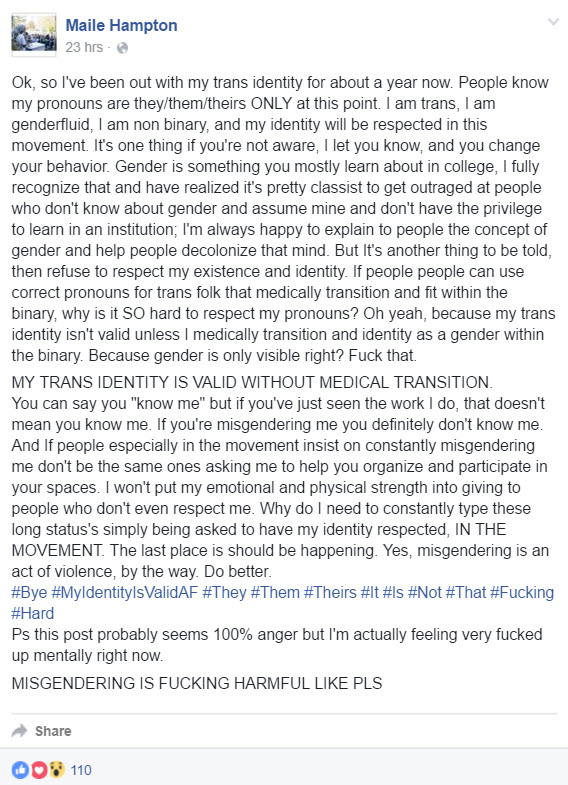 This is even funnier when you consider she’s not even talking to people like me. This was addressed to her fellow radicals and criminal compatriots and was just posted yesterday. I guess not all of these losers are prepared to accept the insane “genderfluid” theory along with the rest of her nonsense. They’re perfectly willing to go along with the ‘Fuck Capitalism’ part, and the active rioting, but this kooky shit is just too much.

Oh, and if you think I’m just picking on her because of last night then you are mistaken. This woman’s history runs deep. In fact, it would take two articles and two videos to even scratch the surface. I spent a couple hours rounding up info and I’m still only giving you the bare minimum. I’m hoping to do more on this nutter myself, but I also think that some of the wonderful people who watch and/or read this might pick up a shovel and do their own digging.

This is not a person who should be ignored. She’s far too amusing and feral. She’s also violent, crazy, and has the support of a lot of California radicals, not to mention the mostly positive attention she’s gotten from the media.

Here’s some more pictures from that protest. Hampton posted them on her own Facebook page, as she seemed to be quite happy with her work. 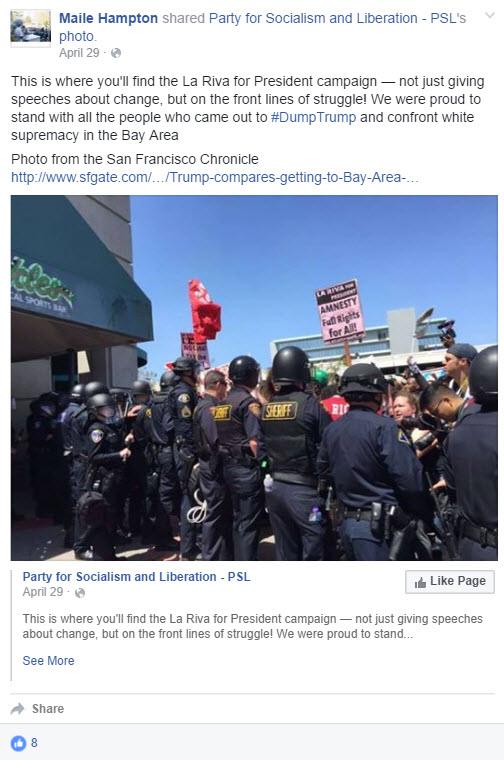 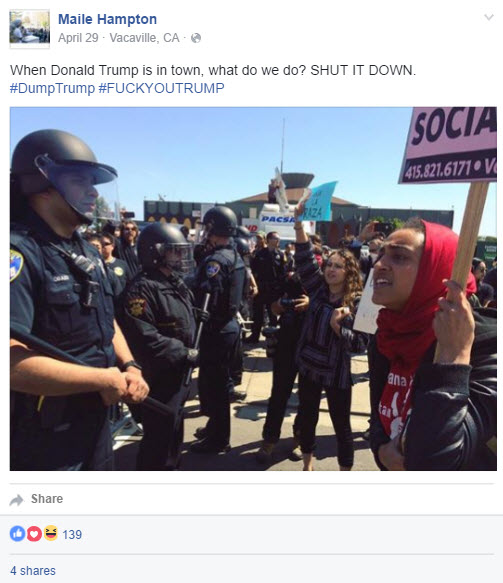 The woman will protest anything at the drop of a hat. I can’t imagine that she has much of a real job, or in the miraculous circumstance that she does, she must be fucking the boss in order to get off work this much. Then again, it’s all about “The Struggle” for braindead idiots like Hampton. Any dereliction of duty can be justified. No protest and/or riot is a waste of time.

Here’s a story about Ms. Hampton protesting Woodland Police because they shot an armed and dangerous psychopath. Woodland is a suburb of Sacramento, in case anyone was wondering…

Woodland Police said at around 5:50 a.m. Monday, officers responded to a disturbance on Elliot Street. Police said when they arrived, they found a 53-year-old man screaming in an apartment complex.

According to police, the man was holding a knife and charged at officers. This is when one of the officers shot at him, in fear of his life. The man was immediately transported by ambulance, but was pronounced dead before reaching the hospital.

However, protestors were outraged that another police officer had shot and killed a local man, especially after the Michael Brown incident in Ferguson, Mo.

“These men that are getting shot, they could have been my brother, my father, or me even,” protestor Maile Hampton said.

Yes, men who charge at officers with knives are likely to get shot, Maile. I guess that’s just another form of the capitalistic, racist, transphobic, patriarchy for someone as insane as you.

Take this post, where she outright says Trump isn’t welcome in any American city. This may come as a surprise to the young communist, but Trump is much more welcome than her or the violent criminals she rolls with. Most people who hate Trump despise vile behavior like this even more than they do him. 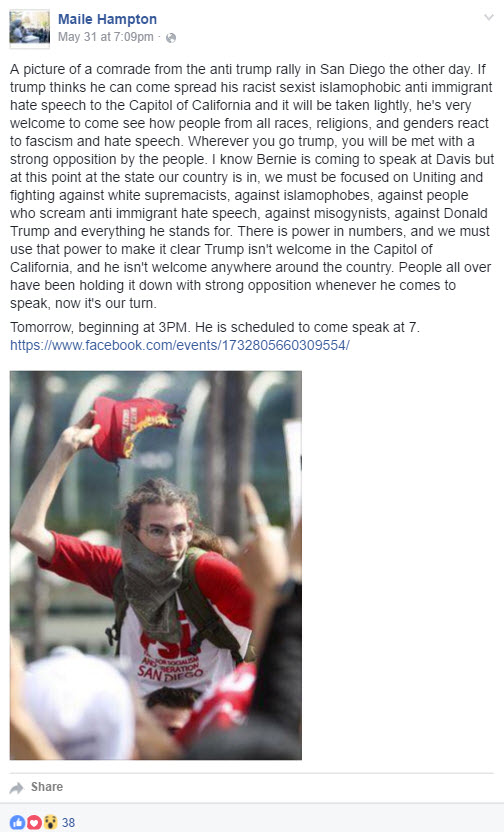 Ms. Hampton is just another in a long line on completely indoctrinated headcases who we can thank academia for. They keep pumping out people who are unequipped to deal with the real world and in many cases, they are violent agitators who have no compunction about committing criminal acts for whatever insane issue is on their agenda for the day. These out-of-touch posers have been fed years worth of material from the 1960’s and 70’s. They see themselves as activists in the same mold as their heroes from that era. No matter what you think of that old activism, these people are pale imitations. They’re basically role-playing at the expense of society at large.

Sadly, much of the media and political complex seem more than happy to go along with their fantasies.

Hopefully, the FBI has their eyes and ears focused on Maile and her Party for Socialism and Liberation (PSL) compatriots. This is a dangerous person who is going to end up contributing to the death of a Trump supporter and/or a police officer. The sooner she’s taken off the streets, the better.

More on Maile, from yesterday…

A woman who appears to be a professional protester appeared in the middle of the violent rally against Donald Trump in San Jose, Calif., on Thursday evening. Given the previous appearance of paid protesters at anti-Trump events, it raises the question of whether the violent mobs have been rented – hence the term “rent-a-mob.”

An ABC News producer tweeted a photo (above) of protesters burning a “Make America Great Again” hat, stolen off the head of a Trump supporter. It turns out, the woman on the right, Maile Hampton, was profiled as someone who appears to be professional protester, in a story published in WND two weeks ago.

Hampton, who goes by the name KwameKahlo on Twitter, is a self-described “Marxist Leninist.” She has been seen and photographed at protests all over California recently, and even in Mexico.

In the span of only 10 days, Hampton appeared at multiple protests. She was at one against University of California, Davis, Chancellor Linda Katehi, then two days later appeared in Mexico protesting labor conditions for Mexican farm workers.