Unhinged Leftist Tantrum Shows That Under Current US Law, It’s Legal to Deny Someone Service Over Political Beliefs

My last working week was mostly spent on YouTube drama surrounding The Skeptic Feminist, Aleksandr Kolpakov. I didn’t have enough time to focus on everything I wanted to due to family commitments and that crazy son of a bitch just happened to catch my interest. Anyway, I hope you guys liked the trilogy of videos I did on the situation. I think we can leave it there for now, unless some more crazy shit comes out about this psycho (which I would not doubt in the least).

The other thing that caught my attention recently is the Richard Spencer gym membership situation. In case you missed it, an unhinged Georgetown professor named Christine Fair harangued him and threatened to sue the gym they both shared for creating a hostile working environment for their “employees of color.” She puts a C. in front of Christine, but fuck that pretentious bullshit. Then again, I can very well imagine what that C stands for, given the way this nutcase acts. Who the hell tries to get someone thrown out of a gym over political beliefs?

By the way, the gym folded like a cheap suit and actually cancelled Spencer’s membership.

And in case you were wondering where the media stood on having your political views used as a reason to deny you service, The Washington Post wrote a puff piece defending this garbage!

An Alexandria gym terminated the membership of white nationalist Richard Spencer last week after he was confronted by a Georgetown University professor who recognized him and lambasted him over his alt-right views.

C. Christine Fair, an associate professor at Georgetown University’s School of Foreign Service, said she was working out at Old Town Sport&Health on Wednesday when she spotted Spencer, president of the white-nationalist National Policy Institute…

“I said, ‘Of course you are, so not only are you a Nazi — you are a cowardly Nazi,’ ” Fair said in an interview, invoking a common characterization of Spencer. “I just want to say to you, I’m sick of your crap — that this country belongs [to people like you]. . . . As a woman, I find your statements to be particularly odious; moreover, I find your presence in this gym to be unacceptable, your presence in this town to be unacceptable.”

Jezebel celebrated as well, but that’s a given. One Twitter account asked if this means that other establishments can start refusing service to Jews and minorities, given the precedent this sets. A Jezebel user helpful pointed out the double standard that legally prevents such an action: 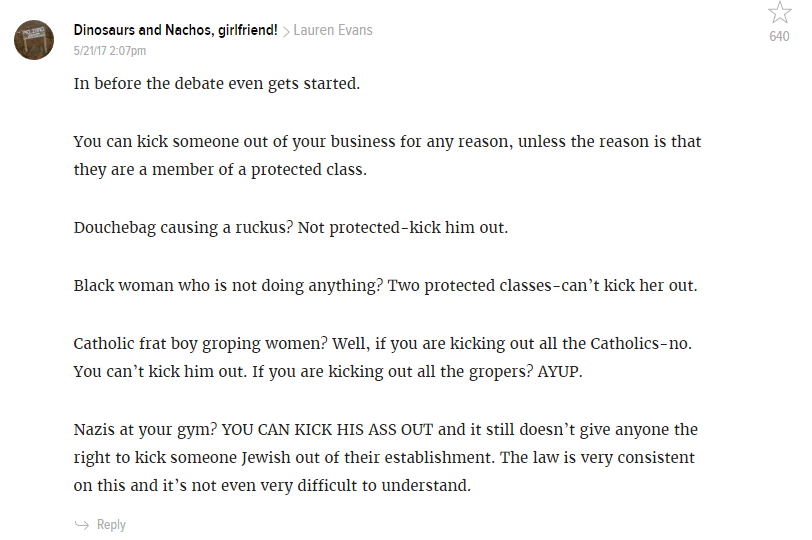 A protected class is described over on Wikipedia as…

So, while you can’t refuse service to a black person or a Jew because they are black or Jewish, you can refuse them service because of their their political affiliations. I encourage secure business owners who are right-leaning to go ahead and try this soon. Personally, I think everyone should be able to do business where they want, so long as they aren’t harming anyone or creating a disturbance. But I would just like to see the reaction from the shitstream media if anyone ever did this to a lefty on the basis of their political beliefs.

Oh, and you will notice that sexual orientation is not on the list of protected classes. Expect that to change soon, as progressives have been pushing like hell for it to become official and the Supreme Court has inched ever so close to making it so with their rulings over the last twenty years, particularly Obergefell v. Hodges. It’s not there yet, but if things keep going the way they are, it will be within the next ten years.

So, don’t expect to get out of baking that gay wedding cake. But you can keep “Nazis” out of your gym.

Oh, and Christine Fair was a really nasty piece of work, even before the Spencer dust-up. Here’s a post about all the doxing she’s done, which I won’t get moralistic about, because as you all know, I don’t care that much about doxing. But this woman seems to be particularly unhinged about doxing every single person who has ever said a cross word to her. She does it all on Tumblr, of course, but she also tweets it out after posting. I wonder what would happen if I had an explicit doxing site set to auto-tweet its posts?. Nah, I actually don’t, since you and I both know I would be suspended with the quickness.

I also wonder what would happen if I attacked a Muslim voter over their political beliefs (I’m noticing a pattern here), like Christine has repeatedly done. I’m fairly certain I would be branded a racist.

But as we’ve seen, there’s two sets of rules. One set for avowed leftists, and one set for everyone else.