Today has been another wild day on the SPJ Airplay front. I wish I could say I was surprised, but I’m not. Originally, I had held my fire on all this. I didn’t go too hard at the organizer, Michael Koretzky. I can now see that was a mistake. The update he put out today was completely incendiary and his attitude was flippant and dismissive. I will give him some slight credit for responding to tweets and trying to put his side out in the face of a Twitter-mention onslaught, but it was the same old shit. Some people were saying I don’t have the right to criticize this behavior, since I’m such a bomb-thrower myself. Let me talk about that for a second.

First-off, I’m not a journalist. I always strive to tell the truth and to run an ethical shop, but at the end of the day, this isn’t an objective site. I’m offering up a viewpoint and I’m biased. I don’t want to hide that, because objective is boring to me. That being said, we do need SOMEONE to be objective sometimes. That’s why we have journalists. Can you realistically take every single bias out? Maybe, maybe not. But you can damn sure try either way. I’m beginning to think Mr. Koretzky isn’t trying very hard. That’s the main issue I have.

Here’s an except from his belligerent post from earlier today:

I announced from the beginning that AirPlay’s agenda would evolve, and when GamerGate’s critics declined to attend, I “hid” and “lied” about those changes in an update read by thousands. Mea culpa.

Oh, and that change you hate so much? Someone within GamerGate suggested it to me. (“Will your kind listen to a history lesson? Maybe just a dirty and quick overview?”) So I listened to your community and made the debate better.

Finally, this: I don’t need your approval. As I’ve said often on Oliver Campbell’s own streams: “AirPlay is for journalists. It’s not for you.”

Well, that’s certainly inspiring, Koretzky. When I read this, as well as the rest of the screed, I decided to go ahead and let loose a little bit myself. Keep in mind, I hadn’t said anything to this guy the entire time because I kinda thought this event was a waste (although it did show how cowardly the other side is):

.@koretzky I doubt you would have treated anti's like you did Oliver. Disgraceful to use private event setup discussion to push a narrative.

.@koretzky If you're supposed to be the ethical conscience of journalism, I can see why the profession is now held in such low regard.

I was far from the only one:

.@koretzky If I appear to hold you to a higher standard than myself: I am.

Airplay is not a blog about your ex. pic.twitter.com/uKyQzFpJYd

Hold up RIGHT THERE. YOU made allegations in your own update and didn't allow response to those allegations. @koretzky

So don't even START with "weird allegations". I'm calling you publicly, a LIAR, and a dishonest journalist. @koretzky

There’s more, and I might add a few later. But let’s get to the BuzzFeed story real quick. I certainly don’t think it was beneficial in terms of getting a positive story out about GamerGate. These biased reports always do accomplish one thing, though. It exposes our cause to people who might not have heard about it before. You would be surprised, but there’s a lot of people even now who have no knowledge of GG. Sometimes these people just accept the media’s reporting at face value, and sometimes they dig a little deeper on their own. These curious minds will often see that there’s more to all this than meets the eye when they do a little investigating.

Anyway, here’s some of that hot garbage from BuzzFeed:

One of those to decline was Arthur Chu — the former Jeopardy champion turned ombudsman of nerd culture — who told BuzzFeed News that “I declined because, like everyone else who was asked, I see no benefit to myself or to the world at large giving these people any more coverage than they’ve already gotten.”…

Of course, if you were paying attention to the controversy last fall, you would know very well what “both sides” represent: GamerGate, as many reporters have extensively documented, acts like a goon squad that gussied up its retrograde agenda in language about journalistic malpractice. The largely anonymous partisans of the largely anonymous movement were responsible for persuading brands to cancel ad campaigns with several major outlets, including Gamasutra and Gawker; the doxxing of several prominent women in the games industry; and scores of death and rape threats against the game critic Anita Sarkeesian and others. “Anti-GamerGaters” united a group of game journalists, mainstream journalists, and internet social progressives against a movement they characterized as a thinly veiled campaign to keep game culture an immature boys’ club.

Well, that sure was a positive portrayal. It almost sounds like this piece of shit has an ax to grind. I wonder why that is? Could it be that he was in on the original wave of “gamers are dead” articles back in August 2014?

And they weren’t lying about the long-winded analogy part. Jesus, that thing is long and tedious as fuck. Here it is if you want to go read it. I had to stop. I don’t give a shit what that windbag has to say anyway, but I’m glad we have him on record. There was another funny occurrence down in the comments section of the article, by the way. Our old friend (and notoriously abusive troll) Stonemirror showed up and was promptly reminded of our work on him: 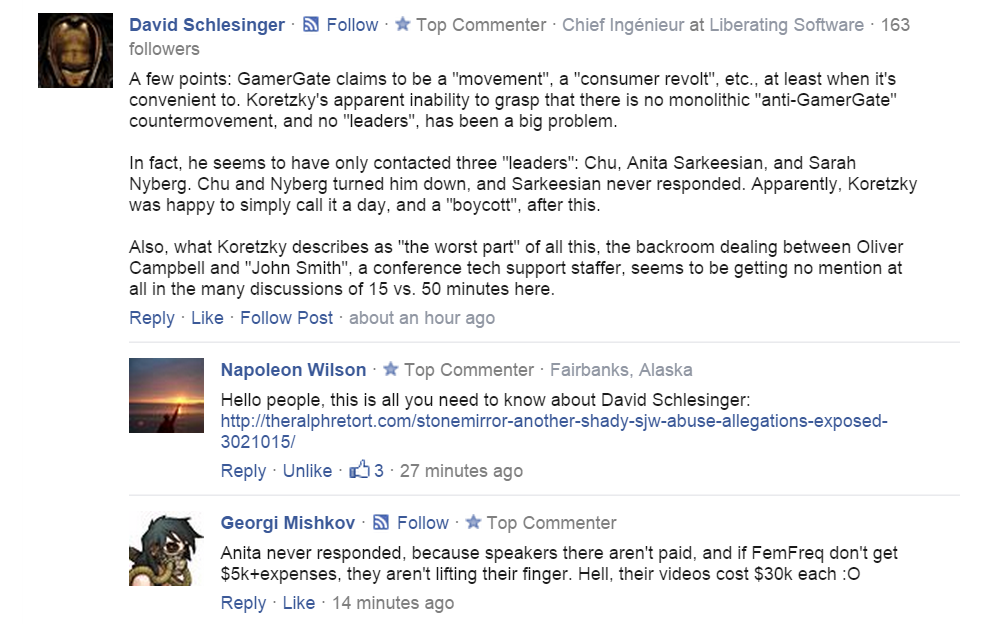 This shit just keeps getting crazier and crazier. I guess we’ll see what happens with everything. I’ll continue to monitor this story and bring you the latest from Twitter and elsewhere throughout the evening. I have a piece from the lovely and amazing Janet Bloomfield coming up next, as well as some stuff on what’s going on with a wild case in Canada, and whatever else I can think of to write about. Lemme know what you think about Airplay and the recent turn of events down in the #BasedCommentSection. I still say we should go, if only because of the caliber of people signed up to attend. I know I trust Milo over pretty much anyone to make the right call. If he backs out then I would say fuck it altogether. As of now, I’m just thoroughly disappointed in the moderator.