I was busy doing the #Killstream last night, so I didn’t get to see any of Baked Alaska’s shitshow as it was going out live. But, I caught up on things today, and man…it was bad. Let’s take a look at the visuals, shall we?

OK, a lot of influencers who are doing a lot of good things are really annoyed with the toxic people and we don’t want them in our communities. Like, we don’t want you around if you’re being toxic.

Here’s the woman who was on stream, “Sweet Erin.” I’m not sure if this is Baked’s girlfriend, or not. But she seems to be attached to him in some way.

Why would you say that?! Baked is actually sensitive…and you will hurt…it it, it’s sad to say, like. You guys can go bitch at people that are soulless, and they won’t react. But you’re saying this to him because you can, because he actually cares…and that’s what I don’t like.

“Stop picking on him he is sensitive”. Nice job sending up a signal flare to every troll on the internet. gg pic.twitter.com/2IjreYTzZH

“How to alienate your audience in just 10 steps” by Baked Alaska. In stores now. pic.twitter.com/tdScMQZsdF

I was also going to link you to some of Erin’s recent YouTube videos, but she’s scrubbed most of her channel since this whole thing started. I did manage to download the Q&A she did the other day, but the weird shower video is gone, along with most of the rest of her content. 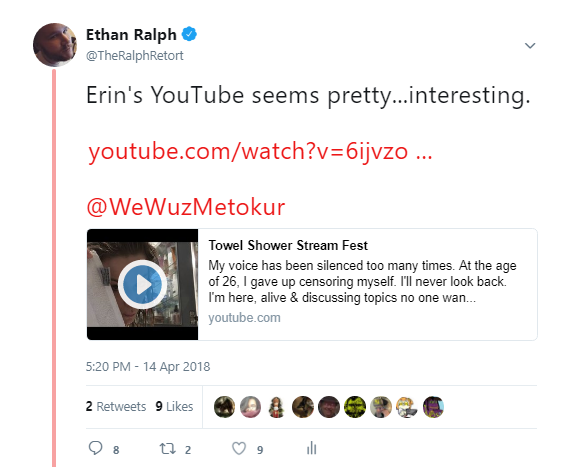 Here’s the Q&A I mentioned. I haven’t had time to watch the whole thing, but in the beginning she’s talking about dick size.

Her past Periscope broadcast also seem to be pretty interesting…

Then there’s this. I’m not even sure what to say about it, to be honest…

Wew. I can’t seem to find any of those broadcasts now. There’s also rumors that she’s made other appearances in “online media,” but since that’s not confirmed, we’ll just have to leave that on the cutting room floor. To be honest, she seems rather harmless. But this is what happens when you sperg out online. It happens to most of us if you put yourself out there enough. But deleting vids is a perfect example of how not  to react.

“A man asked to sit next to me so our dogs could play together and I ran across the street scared for my life” You know how to pick em’ Baked. pic.twitter.com/eHKxCMuztr

This is also a good example of what not to do…

I don’t know where this whole thing goes from here, but I know where I hope it goes.

UPDATE: About that Discord…

Oh yea, I forgot I had this video pulled up before Sweet Erin privated most of her videos. UPDATE II: Now we have this…