I would say good morning, but It’s almost 11PM and that would sound weird. Still, I just woke up and I’m here to write about some shit (EDIT: I wrote that part way earlier). I’m also scheduled to be on with Sargon of Akkad any minute now (EDIT: It’s been pushed back to tomorrow). I’ll post the info here when we go live. In fact, that may happen before I even get this article out, but we’ll see. Anyway, let’s get to the topic at hand. As you can likely discern from the title, we’re going to be talking about that fat tub of goo Randi Harper. It’s been awhile since I’ve written about the blue-haired beast, now that I think of it. She seems to have dialed down the crazy a little bit over the last couple months, but that may be an illusion. She was so insane before that almost anything would look better.

Ok, so, who is the journo in question? He’s a guy named Brad Glasgow, and I appeared with him on a stream a few weeks ago. He seems cool, although I wouldn’t call him pro-GamerGate. That’s good, because he’s not trying to be a GG supporter. He’s writing about us and wants to keep an impartial tone. I definitely see the value in a work like that. But why would a thug like Randi Harper be so threatened by the prospect of a fair retelling of GamerGate history?

The other side has always thrived on misinformation and lies, that’s why. If a respected account came out and challenged their narrative, it could very well be devastating. They understand that just as well as I do. It’s not about sugar-coating shit, by the way. There are some bad things that could fairly be said about us. I’ve never denied that. But a fair report would have to tell the truth about SJWs as well. That’s something they can’t abide. 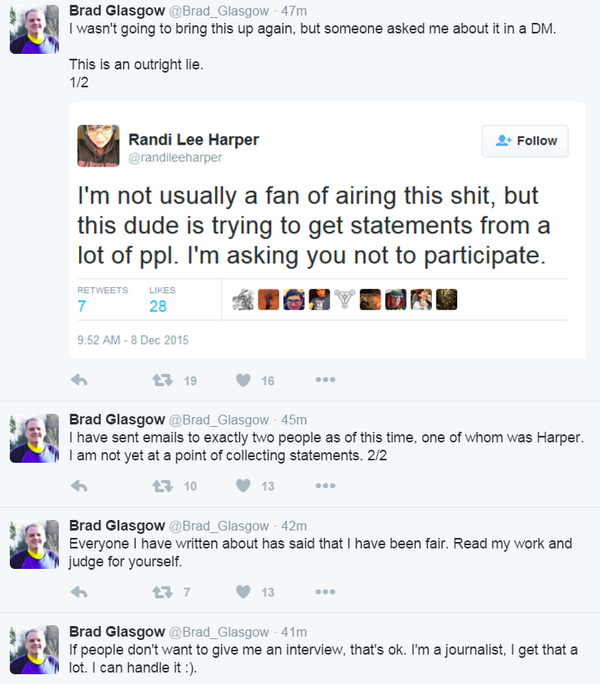 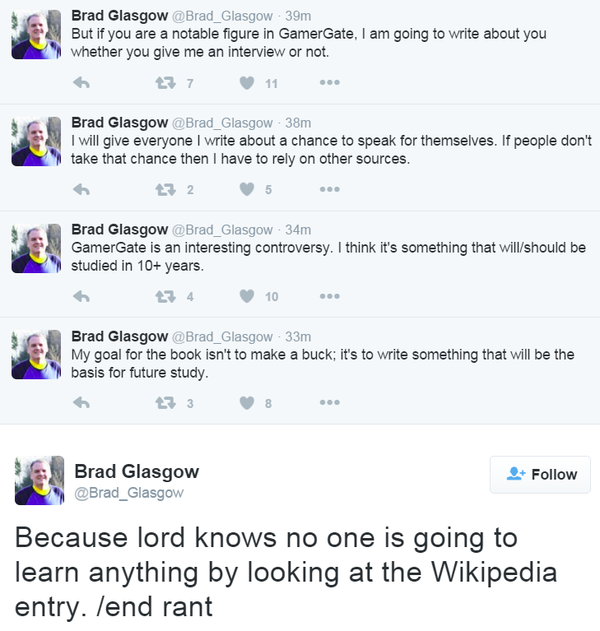 If anti-GamerGate cooperated for a work like this, and we’re quoted in the end product, Randi knows full well that it would lend it more credibility. That’s why she’s doing everything she can to stop it.