BREAKING: Turns Out Democrats Are Behind the “Reagan Battalion” Takedown of Milo Yiannopoulos

The Daily Dot has a huge story out this afternoon, and I think it deserves some major attention. So, I’ve delayed the next post in favor of an excerpt of this post. No matter what you think of Milo Yiannopoulos , this takedown stinks to high heaven. And it stinks even more after you read this about the so-called “Reagan Battalion,” the main group responsible for this attack…

Employees at four of the publications listed by the Reagan Battalion—the Daily Caller, the National Review, the Federalist, and the Blaze—said their companies have no affiliation with the Reagan Battalion. “We have no affiliation with this site at all. Looking at it, I assume this is just his way of promoting websites that he likes,” Leon Wolf, managing editor of the Blaze, told the Daily Dot.

“No relation at all,” said Madeline Orr, a spokeswoman for the Federalist, of the Reagan Battalion. “Never heard of them, and ‘the Federalist’ logo they have on their site is not our logo. Looks like a knock off.”…

An archived donation page, which appears to be exactly the same as a hidden donation page on the current Reagan Battalion website, suggests that the site was managed and paid for by an official PAC registered with the FEC under Stop Trump PAC…

The Stop Trump PAC named on the donation page was established in March 2016 in opposition to Trump’s presidential bid but was quickly forced by the FEC to close down in June because it used a political candidate’s name in its own PAC.

The donation page explains at the bottom that it was paid for by the Stop Trump PAC and lists the website StopDonaldTrump.com. Interestingly, that site now redirects to the Indivisible Guide. Indivisible Guide is a grassroots group, backed by progressives and some Democrats, that is being characterized as the Tea Party of the left…

Curiously, on July 11, 2016, just weeks after terminating its FEC registration, the archives show that a page appears on the Stop Trump PAC’s website dedicated to the Reagan Battalion, although it contains no information on the group.

Further complicating matters, the named treasurer on the FEC records for the Stop Trump PAC is Nathan Lerner.

Lerner is now the executive director of the Democratic Coalition Against Trump, previously known as the Keep America Great PAC. Co-founded by Lerner and Scott Dworkin, the Keep America Great PAC aimed to raise $20 million to mobilize voters who were not pleased with either Trump or Democratic nominee Hillary Clinton. As the Democratic Coalition Against Trump, the group “now exists to hold the Trump White House accountable,” according to its website.

The Daily Dot reached out to Lerner for comment but has not received a response.

So, to recap: The Reagan Battalion bills itself as a coalition of conservative news outlets, many of which take a critical stance of Trump. Reagan Battalion lists in its contact information a website for the nonexistent Stop Donald Trump PAC. That group’s web presence has largely been deleted, but archived copies show it was paid for by the Stop Trump PAC, a registered political action committee created by a progressive activist and the website of which now links to the grassroots group Indivisible.

More thoughts on this soon…

OK, I’ve had a chance to see some of the responses to this post over on Twitter. A few people are saying it doesn’t matter, how can I defend Milo, etc. First thing, I haven’t once defended the content of Milo’s comments. In fact, I think it’s foolish to even attempt to do so. However, where this attack is coming from, who planned it and implemented it…all that is very important. How can you ignore than an outfit that calls itself the Reagan Battalion and lists all these conservative websites on its home page is in fact a Democrat operation with no affiliation to any of those publications?

Leaving that part of the story out is just insane and it lets these frauds off the hook. What ends up happening to Milo is beside the point. These people need to be outed.

UPDATE: More goodies from the “Stop Trump Pac” that preceded the Reagan Battalion… 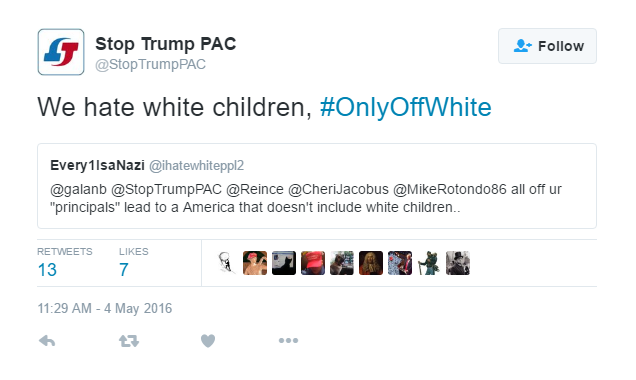