Breitbart News is facing a major backlash among their core readership on Twitter after firing firebrand Katie McHugh over a tweet she made in the aftermath of the London Bridge terrorist attack.

Here is the tweet in question, followed by the response she gave to a critic… 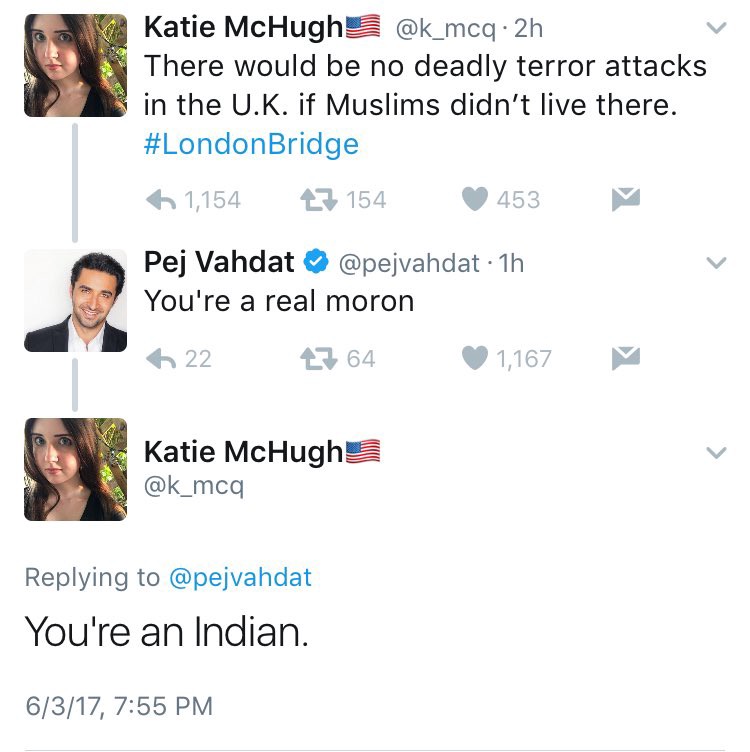 I’m on record with a more moderate approach, as I don’t think it’s completely realistic to imagine that we can or even should get rid of all Muslims in the West. I hate to go full “Not All Muslims,” but yea, Not All Muslims. That being said, I don’t think there is anything out of bounds with people criticizing Islam in general, as it’s pretty fucking clear that there are major problems with the religion worldwide.

No other faith is killing innocents in the same numbers, the organized (and state-approved, in many cases) subjugation of women is a real problem, and importing these values to Western nations should not be allowed. If you want to come and be a part of what we already have going, I’m very cool with that. But bringing hateful Sharia-style thinking should not only be forbidden, we should actively seek to deport the folks with this mindset that we’ve already let in.

Regardless, this post isn’t really about my personal opinion, but to offer one more, I also like Katie McHugh. Lots of other people do too, and Breitbart is taking it on the chin for this decision.

That last tweet from Ricky Vaughn outlines the real danger. Agree or disagree with McHugh’s tweet, this sort of thing ends up giving the left veto power over who writes for Breitbart. Hell, I’ve hosted plenty of guest editorials on this very site that I don’t personally agree with. Leftist outrage means nothing to me and it should mean nothing to Breitbart as well.

So basically Breitbart now is "check out this BASED Muslim with a UKIP hat!"

Here’s the word from inside Breitbart…

Breitbart Editor-in-Chief Alex Marlow announced McHugh’s departure internally Monday morning. After this article was initially published, McHugh herself confirmed she was out, tweeting, “Breitbart News fired me for telling the truth about Islam and Muslim immigration” and posting a link to a fundraising page started to support her on the fringe right website WeSearchr…

McHugh’s comments prompted outrage from a number of her own colleagues. Breitbart employees who spoke to CNN Sunday characterized McHugh’s remarks as “appalling,” “terrible,” and “dumb.”

And from Katie McHugh herself…

Breitbart News fired an editor for speaking frankly about Islam and Muslim immigration. If there were no Muslims in London, there would be no Muslim terror attacks, period.

I said nothing wrong. As President Donald Trump says, if we don’t get smart, it will only get worse.

It’s also interesting Breitbart News chose to fire me rather than colleagues leaking to CNN.

I will continue to follow this story and will update you all as events warrant. If you would like to donate to Ms. McHugh’s WeSearchr fund, you can do so here.