Man, this election cycle just keeps getting crazier and crazier. I’ve been on Twitter following the madness for the last few hours, so I figured I might as well come here and write something about it so all that wouldn’t be a complete waste of my time. Unless you’ve been living under a rock, you’ve already seen that the Governor of New Jersey, Chris Christie, just endorsed Donald Trump. Marco Rubio was riding a (supposed) wave of momentum, but Christie came in and knocked the wind out of him…again.

The funniest part about all this, at least for me, was how I predicted the whole thing live on Twitter. When Trump said he had a big announcement planned, I started speculating with someone that perhaps it was going to be him making his vice presidential selection. I thought it would be odd to do that before he even had the nomination wrapped up, but it still entered my mind. I do believe there’s a decent chance Gov. Christie could end up becoming the VP nominee, but that wasn’t what was announced today. Still, I’m going to take credit for it since I was right with my hunch that it was going to have something to do with Christie.

What if Big Chris Christie comes out on stage as Trump's VP pick and just starts laying into Rubio? I would mark out huge.

Oh shit, I might have called it. We'll know soon hahahahahah. I'm so excited. https://t.co/00kPTFyUNC

(The above shows someone saying they had a source at the rally who was saying there was a Christie endorsement coming.)

Rumor has it that Trump's big announcement is a Christie endorsement. Press filing in now… We shall know soon. 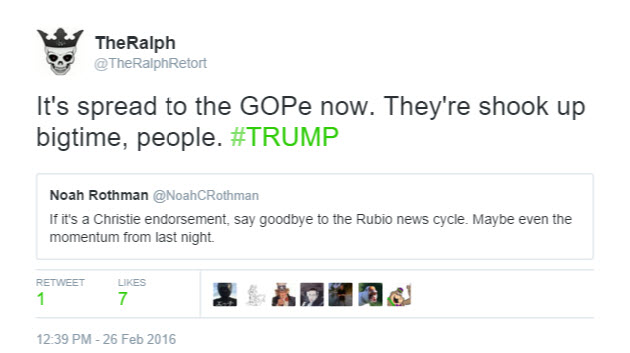 I was on it early. Not to toot my own horn…but TOOT TOOT!@SawmillLoris

If the rumors of what Trump is announcing are true–Chris Christie REALLY doesn't like Marco Rubio.

BWAHAHAHAHA I CALLED IT MOTHERFUCKERS

Yes, I called it…although it wasn’t perfect. That was just the beginning of the fun, though. No one can land attacks quite like Chris Christie. He immediately started laying into Rubio…

"POTUS is not a no-show job like you treated the Senate." – Christie to Rubio #Trump

Not only that, but the Republican establishment completely lost their shit over this whole thing. They’re still sperging out now, by the way. Here’s a selection of some of the saltiest tweets:

LOL the GOPe is fucking on tilt right right now

This is a Rubio Super PAC guy. #Trump #MakeAmericaGreatAgain pic.twitter.com/EtLqSqpbv0

distraught ex-GWB aide: "I'll blackball anyone who works for Christie. No one who stands with Trump gets a dime, or a job, ever."

Making fun of Christie’s weight was a common theme. I’m sure that will help turn it around for Marco Rubio…

what a complete ass Christie is.. a menace to the party.

Another weight crack. I could post 2000 of these if I wanted. Pathetic.

That one was actually before the endorsement, but I had to throw it in anyway.

Actually, it may be sub-par pundits like you who have no future, Erick. I could go on and on for literally days, but I think you get the idea. Will this change the race? Well, Trump is already on top. This should help keep him there while drawing media attention away from Rubio and Cruz all weekend long. Also, expect to see a heavy dose of Chris Christie on your TV screens for the foreseeable future. Trump just got one hell of a surrogate. Keep this in mind as well…

There’s already talks of a unified Rubio/Cruz ticket, depending on what happens this Tuesday. I think there may be some merit to that with the way they worked together last night. I don’t think it’s going to make all that much of a difference, though, but we shall see. I do believe that it’s going to take something huge like that to even come close to taking this race away from Trump.

Damn, I really do love presidential election years. There’s nothing quite like it.