COLD-HEARTED: Twitter Lays Off Staff in The Worst Ways Possible

Finally got back from the passport office yesterday. It went smoothly, other than the fat price that comes with it. I’m still in disbelief that it costs $150 or so total, but I had to have it. The bastards had me over the proverbial barrel. Anyway, let’s talk about Twitter real quick. I know these aren’t always the biggest columns on my site, but I’m interested in the service and their response to the recent downturn in business. So, I’m gonna write about it. Today, we’re gonna look at how they let their employees go today. Hint: it wasn’t in a nice way.

Here’s some of the rundown:

I've been impacted by $TWTR's layoffs. This is how I found out this morning. pic.twitter.com/MbjFwYLcU2

These layoffs were done in some of the worst ways possibly, but almost no one argued that they ween’t needed. Twitter had seen its staff bloat to over 4,000 employees, which, given the recent downturn, is now unsustainable. Hell, it was probably always going to be too much, if you want to know the truth. Here’s a handy chart showing the insane growth in hires:

The Twitter layoffs in perspective: The company only had 350 employees in January 2011 http://t.co/upJiQGLg9e pic.twitter.com/6od5q62cDB

Business Insider has more on the layoffs:

But reducing its workforce by 8% is a step in the right direction. The company’s workforce has grown twice as fast as its user base, its engineers’ salaries are well above the national average, and its stock-based compensation is weighing down its bottom line. Laying off employees to streamline the company is a tough but wise decision — and it shows that Dorsey is serious about turning around the company he co-founded.

Looking at that graph, you can tell that the previous regime got a bit hire-happy. So this looks like a proper course correction. Still, you would think that there are better ways to notify people of their termination. Maybe they could have staggered all this if that was some sort of problem. Even emails would have been better than passwords and shit suddenly not working. That’s bush league. We’ll see what else Dorsey has in store for the future, but this is an inauspicious first act. Yes, it needed to be done, but have a little class, for fuck’s sake.

Sound off on this, if you care. I know many of you loathe Twitter, and don’t give a shit about all this. Forgive me for this if you’re in that boat. Or you could just make fun of the company down below. Your choice. I’ll be back in a bit with an update on the UN beat, as well as some crazy SJWs, as always.

PS: Glad to see the remaining employees are focusing on the important stuff… 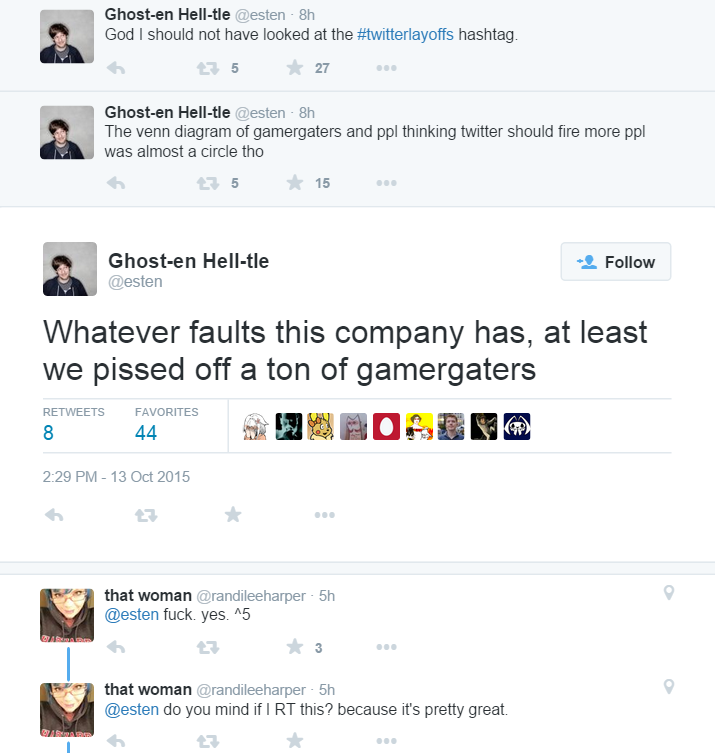