Colgate Calls it Quits With Gawker

Will one more advertiser abandon Gawker before the week is out? That was the question I had on my mind this morning. It turns out, the answer was yes. Today, Colgate-Palmolive announced that they had severed their relationship with Gawker. They didn’t currently have a relationship with them, but had run 3rd party ads on the site in the recent past. Once they were notified of the situation, and Sam Biddle’s support of bullying, they killed the ads. Today is just the day they told us about it in an email (pictured below): 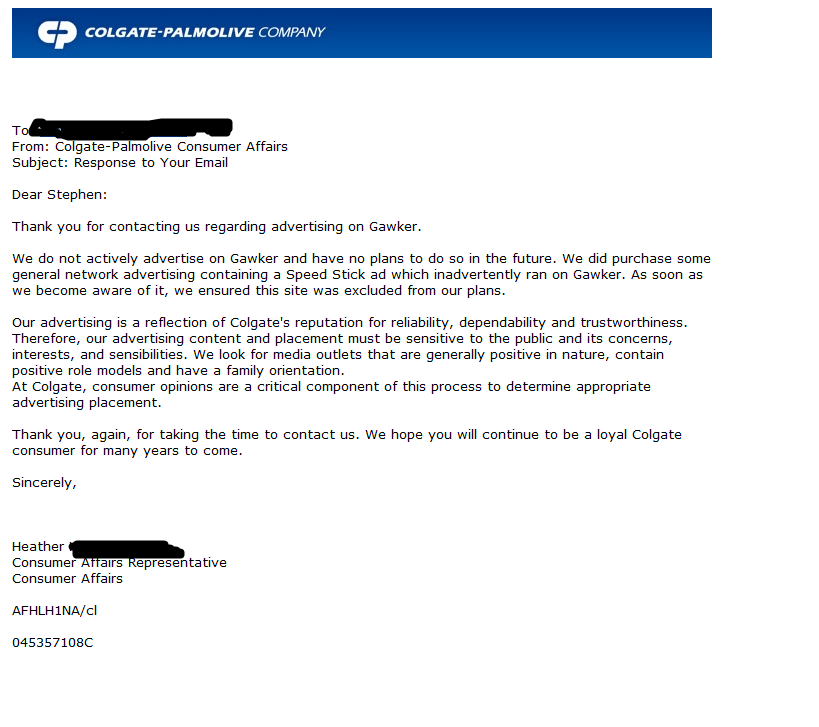 Gawker is in serious danger right now. Big blue-chip companies no longer want to be associated with their brand. If this continues into the future, they will be forced to reevaluate their business plan and employee count. They still get a good amount of traffic, so someone will probably want to advertise. But, it’s going to be for less money. Also, you get less clicks with unknown brands, so if it’s based on that, they’ll lose money there as well.

All-in-all, this might be the best week we’ve had yet. I’ve put Zoe’s bullshit claims to bed, with the help of HTML detectives (and I’ll have more on that soon). Olympus, Adobe, Colgate, and Nissan, have all disassociated from Gawker. And we’re only one week into our anti-bullying campaign against them! I don’t believe I’ve ever seen such a quick response from advertisers. So, keep it up. Gawker is on the brink, and it’s up to us to push them over the edge.