EDITOR’S NOTE: While researching a new story, I noticed that Ms. Mensch went back and deleted every single tweet of hers that I had in this article. I guess that makes sense, because they make her look extremely stupid. It also ties into a new fraud she’s trying to push. In most cases I was able to retrieve caches and archives, or at the very least a Google search screenshot. However a couple are lost.

Louise Mensch is either insane or she’s extremely stupid.

I suppose she could be both, now that I think about it. Regardless, something is seriously wrong with this woman. She’s been fixated on Donald Trump for months, which in and of itself isn’t that big of a deal. A large portion of the country has been avidly following The Donald’s candidacy, after all. But she’s taken her obsession to the extreme. During the primaries, she was one of the idiots who kept saying Trump would self-destruct over and over again. When he proved the airheaded tart wrong, she went and endorsed Hillary Clinton. Yes, the chief of a supposedly anti-SJW, anti-PC website is backing Hillary fucking Clinton for President of the United States. Let that roll around in your mind for a minute before we move on.

Loony Louise didn’t stop there. She went from a detractor of Donald to full-blown conspiracy theorist nutcase. Actually, that’s a major insult to conspiracy theorists, who oftentimes at least base some of their conclusions on, ya know, reality. Louise has no such problem, though. She’s particularly obsessed with the idea that Trump is some kind of Manchurian Candidate, secretly controlled behind the scenes by Vladimir Putin.

Not only is this laughable, but Mensch does it in such an incompetent way that she’s pretty much made herself a laughingstock on Twitter. 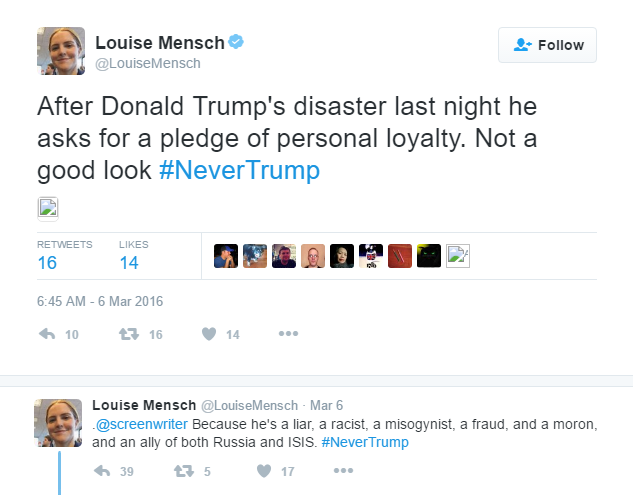 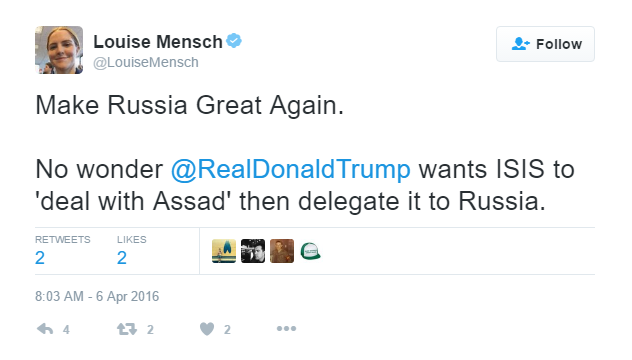 EDITOR’S NOTE: Deleted since publication and there is no cache. You can see it below in the Google search results, however.

No, Louise. They aren’t. That’s the voices in your head getting too loud again. 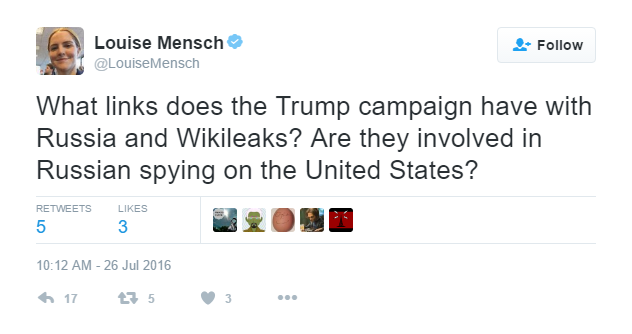 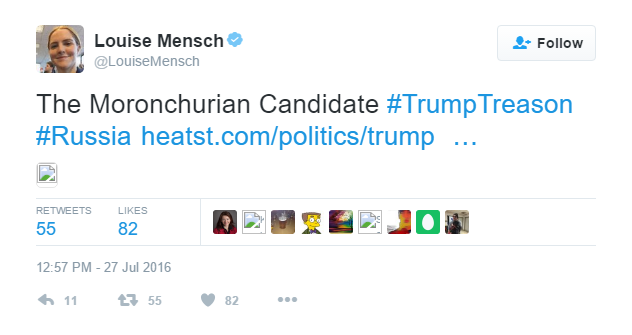 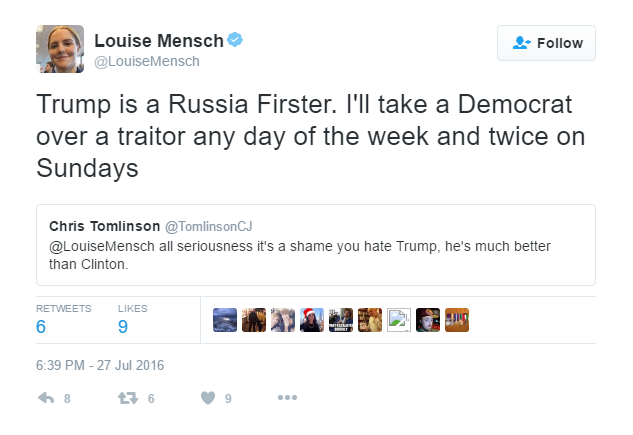 Trust me, that was a very small sampling of Louise’s lunacy. It would take all week to go through the rest and I still haven’t even gotten to the main part of the story. That was just to show you how unhinged this ignoramus truly is about a supposed connection between Trump and Putin. I guess that’s what made her an easy mark for the trap she fell into yesterday. Long story short, there was a #TrumpWon hashtag started up after the debate and Ms. Mensch found a screenshot that she thought proved the tag got started in Russia. All was looking good for this dumbass…at first. Then, the Washington Post came along and showed the image to be a fake.

It was yet another fail in a long line of them from the ex-rock groupie. 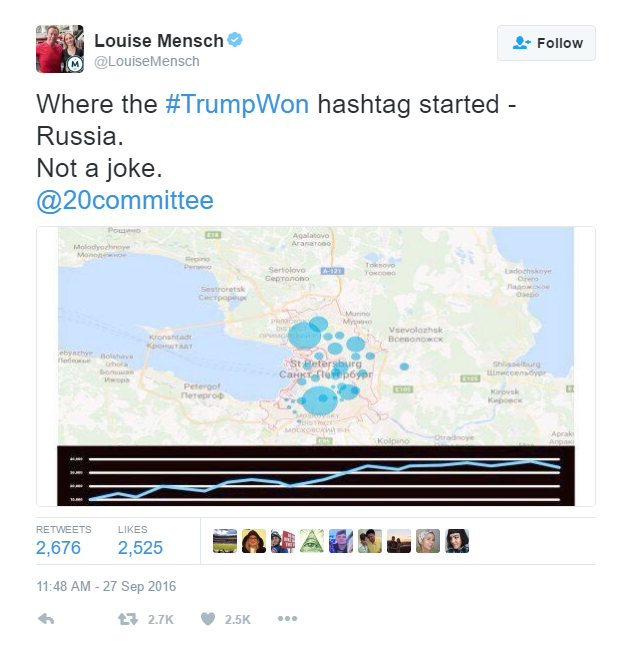 The person who tweeted the image said he’d spotted it on TrendsMap.com, a site that catalogues Twitter trending topics. Here’s what the map of Twitter trends around St. Petersburg looks like now…

If #TrumpWon trended there earlier, it isn’t now. But there’s no evidence it did start there.

Update: A spokesperson for TrendsMap confirms that the map isn’t theirs — and that the hashtag started in the U.S., according to their data.

“This is certainly not from any of our tools and do not know of any tools that look this way,” Kathy Mellett said in an email. “Based upon our analysis, #TrumpWon primarily came from the US.  There was an initial spike just after the debate followed by a much larger one a few hours later.  In particular, around 97% of the initial spike ofapproximately 6,000 tweets came from the US.” The next highest countries? Canada and the U.K.

Notice for one thing that the map provided by @DustinGiebel doesn’t look like the TrendsMap map. The map I posted above is from a premium account for the service; if there’s another tool that overlays blue dots, I couldn’t find it. What’s more, the map in the tweet appears to be based on a Google Maps image, not one from TrendsMap. (Notice the city’s name in both Cyrillic and Latin letters.) If the trend started from a handful of trolls in St. Petersburg, it’s odd that they would be geographically distributed across the city instead of all in one location. It’s odd that the graph would show a slowly, evenly increasing number of tweets from that location. (The axes are obscured, making it hard to tell what’s being measured.)

So, we have a spokesperson from TrendsMap, the company where this map was said to originate, saying it’s not from their site. Not only that, they go further and say the real data they do have shows the #TrumpWon tag was in fact started in the United States. This demolished everything Mensch had been claiming all day. A person with even a small shred integrity would delete their phony tweet and apologize.

As you can probably tell by now, Louise Mensch has zero integrity. 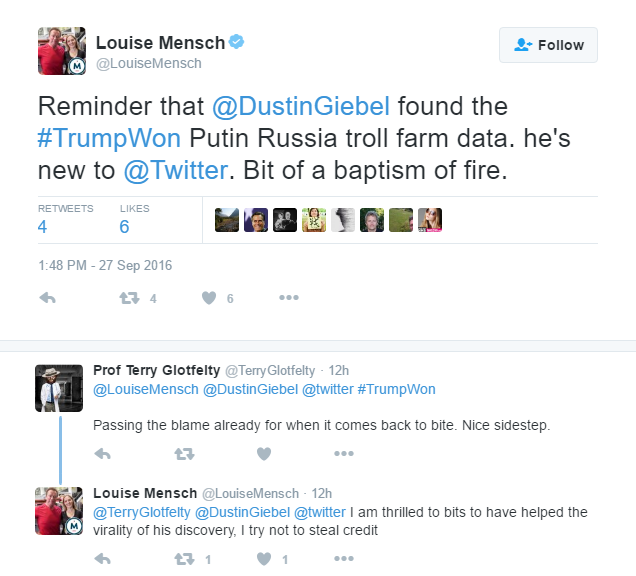 EDITOR’S NOTE: Deleted since publication and there is no cache. You can see it below in the Google search results, however.

EDITOR’S NOTE: Same for the one above. 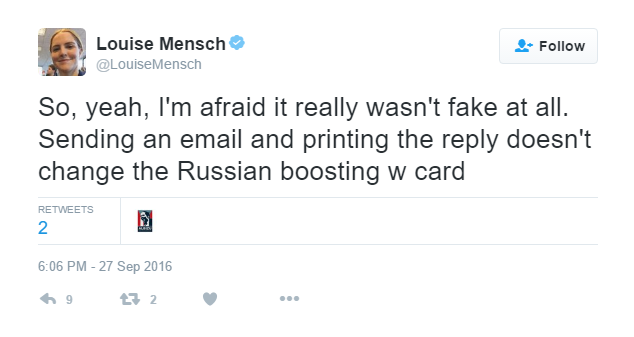 Even with TrendsMap, the company in question, blowing her phony shit out of the water in one of the most famous publications in American history, Mendacious Mensch insists on continuing to push this blatant lie. In fact, it’s pinned to the top of her Twitter profile as we speak. How long until Rupert Murdoch and his clan realize that she’s actually an albatross around the neck of Heat Street and decide to cut her loose?

I’d be very careful if I was her. Her psychosis might end up costing her that cushy Heat Street editorship one day.