Is Peter Coffin the Most Pathetic Man in America? (UPDATE)

The more I see and read about Peter Coffin, the more I almost feel sorry for the guy. He’s made up multiple romantic partners over the years. When I say made up, I don’t mean he just lied about having a girlfriend. I think the majority of us have been there. But I never took it to the next level and photoshopped myself in with pictures of real women, made fake social media accounts, or (allegedly) made up a wife! What in the world compels a man to be such a weirdo? Is there medicine he can take to fix his sickness, or is he just hopelessly lost in a sea of insanity? I mean, he’s a piece of shit anyway. So who cares? I’m just curious. Maybe there’s a medical explanation for his creepo status.

As I was writing this intro, even more evidence has come to light on Coffin, but we’ll get to that in a moment. First, here’s a good recap of the situation, for those who may not know about this (unfunny) clown:

>Who is Peter?
A youtube “comedian” who cares more about social justice than being funny. He came to /cow/’s attention as a result of his attempting to jump on the anti-GamerGate twitter bandwagon.

>Why is he a lolcow?
Four years ago Peter invented Kimi Kobayashi, a japanese girl who he claimed to be in a relationship with. When it became clear that this was false, he pretended he had been catfished, but his actions prior to that make it clear this was not the case.
Now Peter claims to be married to an Ashleigh Burt, another foreign girl who doesn’t seem to exist outside of the internet, and not prior to her relationship with Peter. Naturally this is suspicious.

>So does she exist?
Not clear. It is clear that a lot of what is seen is fake.

>Is there a realdoll?
Very likely. Ashleigh is depicted as having large breasts and no hips. Her face seems permanently stuck in one position. We haven’t seen any evidence that she moves.

>Explain
Almost all photos of Ashleigh are grainy and with the mouth covered. It has been demonstrated that it is easy to make the difference between human skin and realdoll skin unclear with the sort of filters being used. Many of her poses are unnatural and wonky as one would expect of a doll, but not a human. Some (all?) gifs of her are low frame with oddities such as blank frames and identical frames with different filters. This would not occur converting video to gif, and is indicative that Peter is using stop motion animation.
Most pictures without a filter are of a girl’s back in a public space. There is nothing in these pictures that indicate they are Ashleigh, and indeed don’t look proportionally the same as the “doll” pictures.
The exception to the above is the “braces” pictures, showing a smiling girl with braces. She appears to be real, and may be the real Ashleigh Burt. She does look somewhat different from the “doll” pictures, though it’s hard to be sure with few images.

>Does she have a family?
Not certain. There are some Facebook accounts that look potentially real, but Peter has a history of creating sockpuppets accounts to make his lies seem more real.

>Is there a child?
Let’s hope not. It’s not clear at this point.

>Has Peter killed anyone?
Probably not.

That pastebin has all the links you need, except for the new stuff that came in tonight. Basically, this guy is a real creep, and reminds me of a Ted Bundy in-training. He’s obviously dangerously detached from reality. Maybe the blogger from Singapore blowing the fuck out ruined his sanity for good. It was a heavy blowout, I must say. It could have shaken anyone up, especially someone as batshit crazy as Peter Coffin already was.

As I said, all of this got even better just a little while ago. For weeks, people have speculated that he also made up his wife and passed it off using a “realldoll”, as the pastebin excerpt mentioned. At first, I thought this was crazy, but I always kept in mind that we were talking about Peter Coffin. So I never ruled it out. As more and more evidence started to roll in, I started to believe. After the pics that were discovered tonight, I’m starting to believe that Peter’s “wife” really is a fucking doll. We can’t say for sure. That’s what my lawyers tell me to throw in. Also, Peter could end this tomorrow by coming forward with some solid evidence. Who knows.

Either way, here’s the evidence that was discovered tonight. You can make the decision:

They found your wife, Peter!1 BWAHAHAHAHAHAhttp://t.co/YhfoN51fFThttp://t.co/2s6ldY4QRg#GamerGate

Here’s Peter having a Twitter meltdown, which is only appropriate, since /cow/ is wrecking his fucking shit right now, 24/7. I guess you shouldn’t have been such a hypocritical piece of shit…not to mention a creep. And we haven’t even talked about the cease and desist letter he allegedly sent to Hotwheels yesterday. This man has too much crazy for one post. 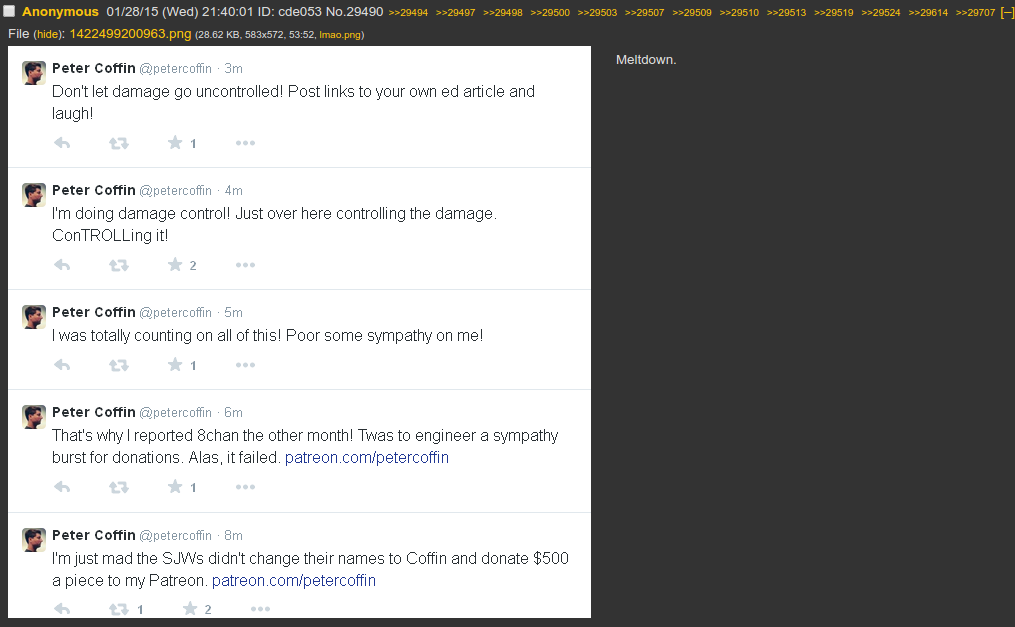 Many of our high profile enemies are getting exposed lately, and it feels great. Savor this one, and drop anything I might have missed down in the #BasedCommentSection. I think I’m gonna go blaze one in honor of Peter’s “wife.” It’s been another awesome day to be a supporter of GamerGate.

UPDATE: BroFreq seems to think the wife is real. I still have serious doubts myself lol (although I never said it was VERIFIED a fake), but I’ll post this here just in case: