Kingdom Come Deliverance #1 on Steam, 500,000 Copies Sold in 2 Days According to Vávra

Sorry for the slowdown during the last couple days, but I’ve been spending time with my wife, who is visiting from the United Kingdom during her break from school. She’ll be back home next Tuesday, but I still want to do a little bit of work during our vacation. So, I thought it would be cool to come by and update you all on the Kingdom Come: Deliverance release (I’m not sure if writing about a video game I purchased counts as “work,” but whatever lol). I have a copy on PS4 Pro and it looks great. Nora has played it a lot herself and I think she’s been enjoying it even more than I have, which is saying a lot.

Also, it looks like we aren’t the only ones enjoying it. Just look at how the Steam stats for KC:D stack up against some major recent releases: 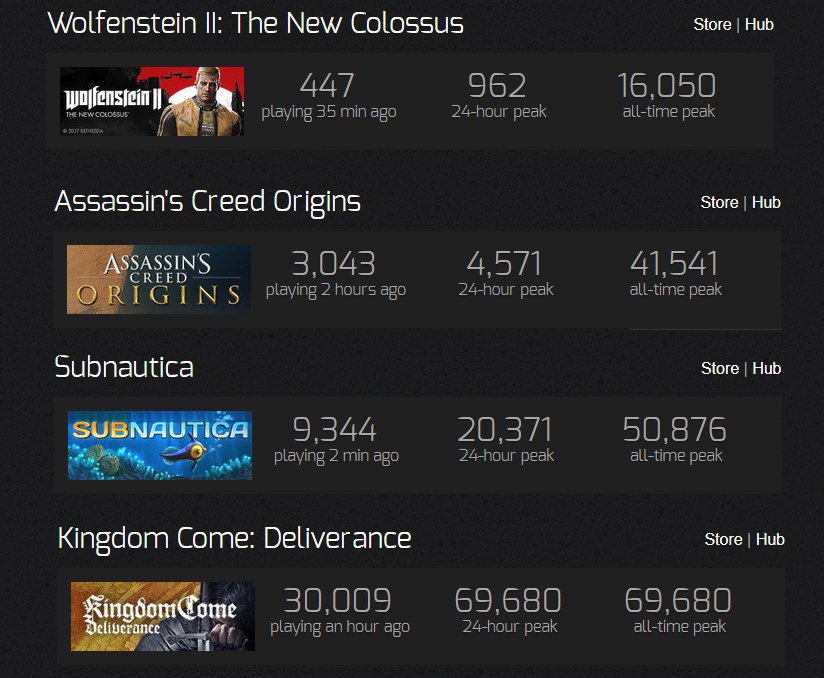 Apparently, it’s gotten all the way up to 85,000 active players over on SteamSpy. Keep in mind, the stats are a few days behind there, so if anything, this actually underrepresents launch’s success. A forum post translated some of a recent interview with Daniel Vávra, and as you can see, things are going quite well…

I think the game will be paid tomorrow, and anything over a million sold will be nice for us, and we are about to be in two days (from the release) to half,” Czech TV Vávra said on Wednesday evening. Development, according to him, stood at hundreds of millions of crowns. It is probably the most costly game in the Czech Republic…

On the Steam platform, the world’s largest digital copies of games, Kingdom Come is currently the fourth most played game with about 70,000 active players. It is also the best-selling game. Martin Klíma of Warhorse Studios announced on Wednesday that in over two days, they sold on Steam over 300 thousand digital copies of the game. Sales figures for PlayStation 4 and Xbox One will be available for up to a month.

And what makes all this even sweeter is the fact that there was a lot of hate directed towards this game because of past activism from Vávra. Here’s a small sampling…

Daniel Vavra is a gamergate supporting racist piece of shit and deserves none of your money. Don't buy kingdom come.

Since Kingdom Come: Deliverance is coming out today i wanted to offer up some thoughts on the drama that's been following it ever since it's creator outsed himself as a huge racist/Islamophobe.

Vavra and his rightwing white supremacist buddies can eat shit for all I care. Bunch of wannabe Nazi fuckheads.

And fuck KC:D. So not going to play that ever.

I implore people to not buy the game, to boycott it. We have to show that people who hold such disgusting views should not be rewarded, and that games that come from such a rotten, anti-progressive stance don’t deserve to succeed.

Well, that’s working out fabulously so far. Keep up the good work, losers! I, for one, am taking great solace in the fact that no one is buying the bullshit you’re selling.