I seriously keep trying to think of new openings for this spot. It’s slightly difficult, as I’ve discussed before. It sounds ridiculous to keep saying the SJWs have one-upped themselves in terms of atrocious and hostile behavior. But it keeps fucking happening. So, what else can I do but keep saying it? I would have to sit here and go through the loooooong list of abuse that anti-GamerGate has heaped on us to say for sure, but the next case is one of the very worst I’ve seen throughout the entirety of GamerGate.

KingofPol is a video game reviewer, and critic. He does game streams, and shows about GamerGate. I was on one of those the other day. He was gracious enough to come on my show last week. So, we have a working relationship. But before I knew him at all, I wrote about his doxxing here on the site. For some reason, he really pisses the other side off a lot. I’ve written some very hard-hitting stuff, and no one has ever tried to doxx me (not that they won’t lol).

There’s a few other things they haven’t done to me. For one, until now, they’ve refrained from calling me an sexual abuser of children. Yes, you read that correctly. The other side has now taken it to another extreme. No, they didn’t compare us to a deadly terrorist organization. The Ebola virus  disease was not brought up. No one advocated any doxxing. There was no childish insult. Just a flat out false declaration that KingofPol was a child molester. Jack Connell, the SJW cultist writer who tweeted it, didn’t leave much doubt about interpretation.

I don’t see how someone could argue with us taking offence to this. It’s not a joke to label someone a child molester. It wasn’t even meant to be a joke. He capitalized “is” for emphasis. Jack Connell wants to be clear that we don’t think it’s humor. OK, message received. As of right now, the tweet is still up. Not only that, he still writing offensive shit as we speak. 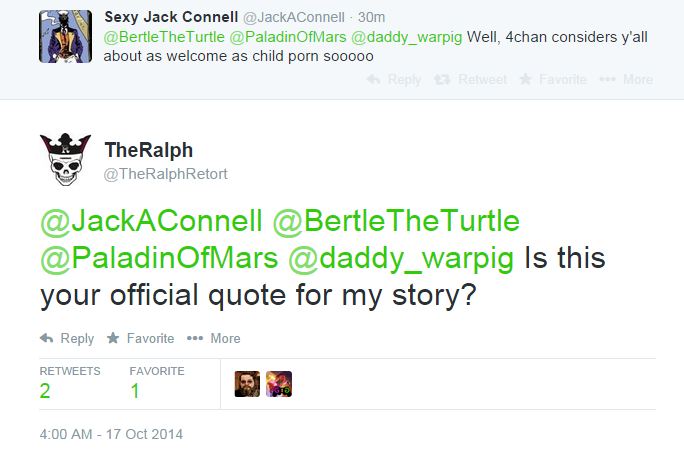 I gotta admit, Connell’s a nobody. Even writing about him will be called into question by some. This is likely to be the biggest exposure the guy has ever had, with our recent surge in traffic. So this might actually help him, in some perverse way. But, you know the standard operating procedure here at TheRalphRetort. When we see the something heinous, we call it out. Even so, if Jackass Connell hadn’t taken a couple extra steps to let me know he was dead serious, I would have still let it go. But he did, and here we are.

I want to say this type of thing won’t happen again, but I’ve seen others allude to us being child molesters before. This is just the first time I’ve seen them come out and directly say it. If it happens again, all we can do is document it. As for Connell, just leave him to rot in his mire of mediocrity. GamerGate will continue to soar.

UPDATE: Connell wasn’t done. He went on another hate-filled tirade after this story was published. Here’s another couple of disgusting tweets…