YouTube drama, again. Known plagiarist Jaclyn Glenn has publicly accused another YouTuber in a video of stealing Evalion’s content by reposting her videos on their channel and breaking YouTube’s terms of service.

“Even if I did take it from this person’s channel, like, hmm, which I didn’t, but even if you did, they ripped her video from her channel. They downloaded her video, and took it from her, you know, so it’s still, I don’t know, it’s such a weird situation, like that is, I don’t think that’s really allowed on YouTube. I don’t know, I didn’t watch any of their videos, I don’t know if they commented on it or just downloaded it and re-uploaded it, but I know according to YouTube you’re not allowed to download and re-upload videos unless they’re your own and you have your own personal archive channel. I know people do it all the time. If she wanted to, she could flag that video and have it taken down or somebody else could do it, saying it’s not their content.“

Who could she be talking about? Me! Yep, known plagiarist Jaclyn Glenn is accusing me of stealing content made by my friend Evalion and reposting it in breach of YouTube’s terms of service. That would be true if I didn’t get Evalion’s permission beforehand, which I did.

The irony is strong on that one! A known plagiarist accusing somebody else of stealing content.

Fun thing to notice is, the most repeated words in that quote from her video are “I don’t know”. She doesn’t know if I commented on Evalion’s videos or just reposted them without modifications but makes accusations that I stole Evalion’s content nonetheless.

Also, I am not implying that “somebody else could do it” is a call to action using reverse-psychology. I am NOT implying that she encouraged her subscribers to flag my videos, because that implied behaviour would be exactly the same as what her friend Onision did about Evalion’s channel, albeit in a more covert manner.

Ms. Glenn, in her original video, sounds appalled by Evalion’s views and beliefs.

Here is one of her thumbnails, cosplaying as a nazi. 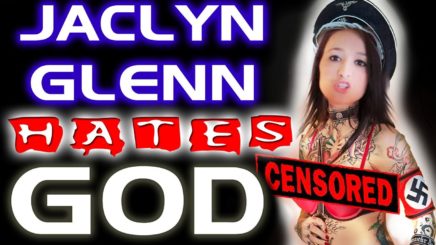 How did it get to that point?
How did a D-list e-celeb like Jaclyn Glenn hear about me?
How did copypasta sempai notice me?

It all started on the morning of May 23rd, when I received a tweet from AgentOfDoubt:

My reaction was one of confusion and surprise. I knew Ms. Glen had been accused of plagiarism multiple times in the past but I had no idea how Evalion or I could be involved in this.

For those who don’t know him, AgentOfDoubt is a YouTuber that obsesses over free speech issues. He recaps all the censorship through flagging and copyright claims on YouTube weekly, and he trained his pitbull to sic nuts with a laser.

Yes Dat. Jaclyn's convoluted story that she saved all the kids before the bandwagon is cringeworthy…

I dare, with my whole playlist of her plagiarism.

Indicative of the effort she puts in her videos. Which video do you reckon she got it all from?

I’ve been approached by some Jaclyn Glenn fanboys since then, asking/telling/ordering me to apologize to her. To that I would answer: “What?”, just as I did before.

I didn’t have time to verify the allegations from AgentOfDoubt since I had a backlog of videos to edit so I preferred not to accuse her of anything and tried to reach out to her instead for comments.

Hey Jaclyn, could you DM me? I'm sure we can sort this out.

That sounded like a reasonable request to me at the time. Let’s discuss things to prevent a misunderstanding. I’ve been involved in enough pointless YouTube drama lately and realized that communication and discussion can solve a lot of problems.

Instead of talking to me and avoiding unnecessary drama, she decided to do a video response to a tweet. In preparation, AgentOfDoubt made a video of his own to expand on and clarify his prior statements.

At this point, I still had not seen Jaclyn Glenn’s original video about Evalion so I couldn’t corroborate or disprove AgentOfDoubt’s theory yet.

She then published her video on her secondary channel as she said she would.

After watching her video, I came to the conclusion that she used clips from videos that I never had mirrored on my channel. If she would have taken a few minutes to talk to me earlier, two people would have saved the time to make a video each and drama would have been averted. Good thing that I didn’t make accusations against her, which would be easily believable according to her past record of plagiarism.

Drama over, amirite? Nope, that was just the beginning of a whole new chapter of drama.

She concluded the video by accusing me of misconduct and stealing content from Evalion in the quote mentioned at the beginning of this article. That sounds awfully like a deflection tactic to shift the focus on me, away from her. Virtue signaling to show how much she is reformed from the treacherous ways of her past and self-admitted misdeeds she previously committed.

Just as a side note, using the same kind of evidence that she used to prove the time at which she really downloaded those videos, here is proof that I downloaded her video a whole year before she had even made it.

That’s besides the point anyway, just showing that her evidence could have been faked very easily by rolling back the computer clock a few days, months or even years. Luckily, she had used different videos than the ones I mirrored on my channel so whether her evidence is credible or not is absolutely of no consequence to the matter at hand.

Since her accusations were without merit according to me, I offered Ms. Glenn an explanation to enlighten her and asked her for a correction.

.@JaclynGlenn Alleging that I broke YouTube's terms of service publicly in a channel with 43k subs is wrong. I would appreciate a correction

Here is her reply:

Interesting… Very interesting… Rather than making a correction or even saying anything in private through DMs, she preferred to block both AgentOfDoubt and I.

AgentOfDoubt admitted he was misguided about his allegations and I confirmed it too.

He also made a stream containing a retraction, where I make an appearance towards the end.

That sums up the drama that happened up to now pretty well.

For those who haven’t heard about the plagiarism cases against Ms. Glenn, AgentOfDoubt made a playlist of videos that explain those cases and show the evidence for them.

It seems someone doesn't like a few of the videos in the Jaclyn Glenn PLAGIARISM playlist. pic.twitter.com/2y54jjb8a6

Hopefully, everything is settled between AgentOfDoubt and Ms. Glenn.

Between me and Ms. Glenn, not so much.

I would still like for Ms. Glenn to be reasonable and make a retraction video about the matter, preferably on her main channel. Around 6,000 people have seen the video up to now containing the accusations against me. That’s probably why I had a substantial drop in subscribers since then, much more than the usual daily average. I have suffered damages in all this, while Ms. Glenn just blocked me and considered the matter closed after making her unsubstantiated accusations. I don’t think reparations can be made since the people that unsubscribed from my channel are probably fanboys of hers anyway but at the very least, I care about my reputation and the reputation of my channel, which is mostly used to promote other YouTubers by showcasing them in interviews about their story and experiences managing their channel, or mirroring some of their videos to give them the kind of exposure that would be difficult for them to gain on their own.

Also, I nominated her in my video for the #MessageToFeminists challenge, so hopefully she will follow the rules of the challenge (similar to the ALS Ice Bucket challenge) and make a video of her own.

Evalion commented on the situation after reading this article.