I’ve been playing games all day, but thank goodness I got back to the PC. Why? Because Master Milo just dropped a huge bomb right on Sarah “Butts” Nyberg, a notorious pedophile and SJW advocate. I’m still finishing  the material as we speak, but let’s hit you with some excerpts from the beginning. Holy fuck, it’s really good, guys. Milo put all the evidence out there in a professional manner. He reported it straight, with little to none of his usual flamboyance:

A progressive activist who was quoted by the Washington Post and whose writing has been featured in Ravishly and Boing Boing claimed to be a “pedophile” and defended white nationalism, Breitbart can reveal.

Sarah Nyberg, a transsexual formerly living as Nicholas Nyberg, sometimes known as Sarah Butts, is a well-known critic of the GamerGate movement who was recently quoted on the topic by The Washington Post. She enjoys the support of prominent progressive commentators including Salon columnist Arthur Chu, former NFL punter Chris Kluwe and academic Katherine Cross.

As Milo said earlier on Twitter, GamerGate already knows many of the facts in the story. His piece is more about establishing a permanent record that all Nyberg allies will have to answer, in perpetuity. Whenever the pedo opens its mouth, they will be confronted with this post, which will be read by thousands. I don’t think they’re going to like what they see, by the way:

In a shocking post on Nyberg’s own FFShrine forum, dated 26 October 2005, Nyberg, who used the screen name “Sarah,” describes herself as a “submissive male to female transsexual pedophile that’s fond of ageplay and penisgirls that really misses Alice (Nyberg’s 8-year-old cousin).” Elsewhere in the logs, she says “yes, I am a pedo. I embraced my childlover soul long ago.” Nyberg says she knows pedophiles: “I’ve probably known 8-12 pedo trannies,” she says.

It doesn’t get any better the more you read. In fact, it gets even worse…if that’s possible:

Nyberg claims to have been the subject of some kind of investigation in the past. She says that her computer was seized in 2005. Nyberg expressed concern that they might find her encrypted drive, which contained what she described as “non-nude model” pictures.

She also admitted to hosting pictures of “ptms” (pre-teen models) on one of her websites. In her view, naked pictures of children “isn’t cp.” (CP is web slang for child pornography.)

There seem to have been other members of the FFShrine chat room Nyberg operated who had similar inclinations. One member, writing under the pseudonym “Ego” tells the group that he is “waiting on the little neighbour twins to develop.” In response, Nyberg requests pictures of them. 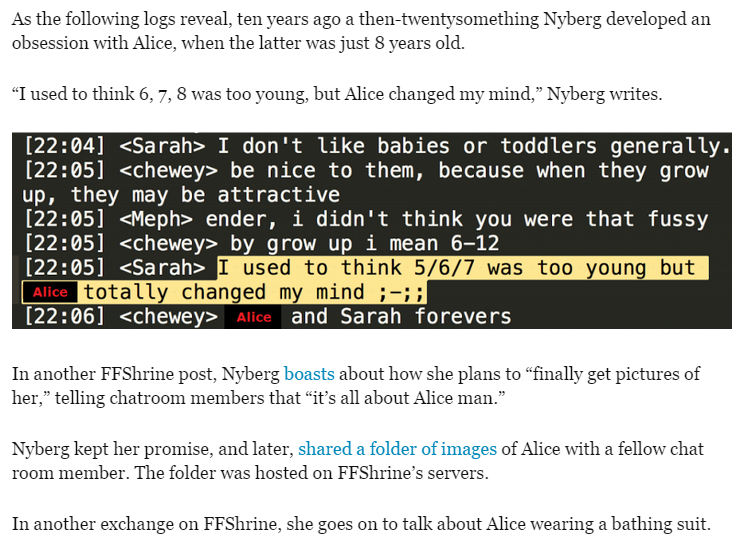 Good fucking lord. Even though I’ve seen most, if not all of this, it still packs a punch when it’s laid out consecutively, in a column by one of the best journalists around. Milo is carrying a really big stick here, and seems determined to erase Nyberg off the internet. I honestly don’t see how Sarah can show her face on Twitter any longer, but perhaps I’m wrong:

“Most ethical pedos don’t advocate penetrating little girls,” says Nyberg in one logged FFShrine post. But in another, she says: “I’d have sex with a little girl if she wanted to.” Elsewhere in the same chat room, Nyberg says that she “honestly doesn’t think there’s anything wrong with sleeping with kids,” adding that she wouldn’t do it but only “to avoid getting in trouble.”

There’s a LOT more in the piece, but I don’t want to reprint the whole thing. Go read it for yourself right now, if you feel like you can stomach it. As for me, I’m going to go move on to something else, and try to get this sick fucking pedo out of my head. Sarah, you finally got what you wanted. You’re famous!

Oh, and there’s this:

Breitbart is in contact with both of Alice’s parents. They confirm the facts of our story but have declined to comment on the record.

And this, where Nyberg admits the logs are real: