To be clear, the Social Autopsy Kickstarter doesn’t really sound like the best idea to me. I don’t really care about doxing, but launching a harassment site to fight other (again, alleged) harassment sounds like a rather inconsistent position to take. But, the beauty of all this is, the creator of the effort is now trashing Zoe Quinn and blaming her for racist abuse that she says she received in the aftermath of a conversation the two had yesterday.

She leans in when speaking, making direct eye contact, and has a polished disposition that belies her age. At 26, she doesn’t seem like someone who, only a few years ago, was plagued by bitterness over a traumatic bullying incident when she was a senior at Stamford High School.

But that, Owens said, is the course her life took. In 2007, she accused a classmate of leaving threatening voicemails threatening to kill her and spewing graphic racist epithets.

The boy who was ultimately charged in the case was in a car with several other kids — including the then-14-year-old son of then-mayor, now Gov. Dannel Malloy. The role of Malloy’s son was never clear, but his simple presence made the story go viral.

While the instant celebrity changed Owens’ life, little has changed in the years since in the world of bullying. People still use the anonymity of the Internet as a cover to say racist, violent or simply crude things about everyone from celebrities to regular people such as herself…

Owens’ family sued the Stamford Board of Education in federal court, claiming the city didn’t protect her rights. Eventually, the board paid $37,500 to settle the case.

Owens has hit upon something here and It’s hilarious that she’s now tangling with Zoe Quinn. To be fair to Ms. Owens, she does seem to have pegged Quinn for the harasser that she truly is.

Wow, Zoe, I didn’t know you rolled like that. Hopefully you can somehow clear this up for us. Also, seeing Owens label her as a part of GamerGate world is pretty damn comical. Personally, while I don’t support the project, it’s great to see these two battle it out. Hopefully more lulz will come out of the project. Given the section that I’m about to show you, I’m almost certain that will be the case…

Hamburger Harper jumped into the ring to defend Queen Zoe’s honor after the entanglement illustrated above. I can’t think of a person who personifies bullying better than her. We have many of those incidents documented on this very site. So to see her criticize this initiative is even funnier than Zoe and Owens going at it. I guess Big Randi and Quinn are worried about Social Autopsy soaking up some of their potential loot.

It’s like rival drug gangs fighting over the same turf. 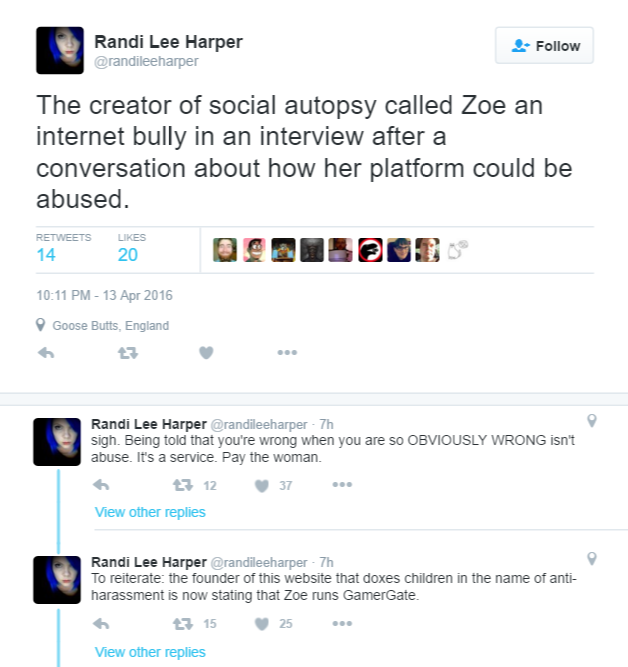