The Rad Fem Response to “Linkle” Is Hilariously Idiotic

In case you missed it, yesterday Nintendo revealed a new character for the Hyrule Warriors Legends game they have coming out on the 3DS next year. As most of you already know, the reveal concerned a female interpretation of Link (oddly) named Linkle. Keep in mind, this game isn’t actually developed by Nintendo themselves, and it also isn’t considered canon. So this is all for fun (the whole point of gaming, sorry #FullMcIntosh), which is fine. I wouldn’t care either way, but I’m just pointing that out. Another thing to keep in mind is that this character wasn’t really new. Designs for Linkle were in one of the art books included with special editions of the original Hyrule Warriors game that released on Wii U in 2014. In other words, gamers have been making art about this character for a long time now, and pretty much everyone loved it. That didn’t stop the dishonest feminists from spreading a bunch of bullshit yesterday, though.

Of course Deceitful Wu was the first dumbass in line, but he was hardly the only one to spout a bunch of nonsense… 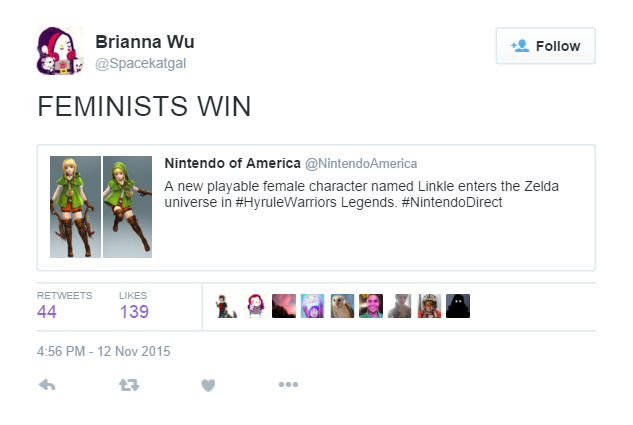 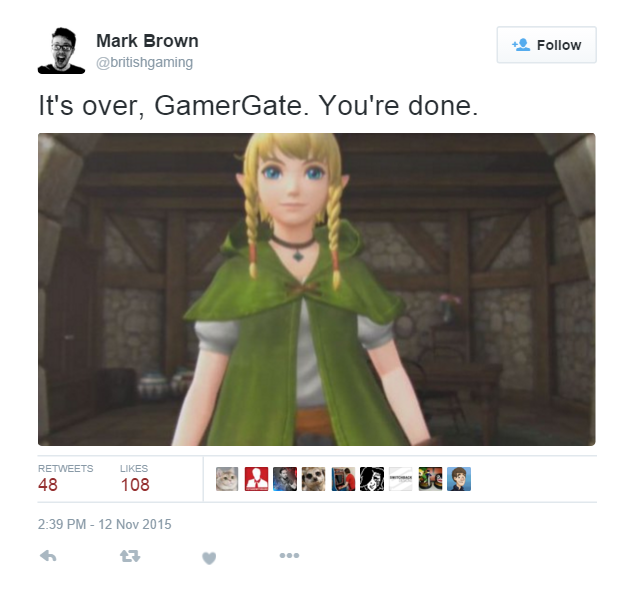 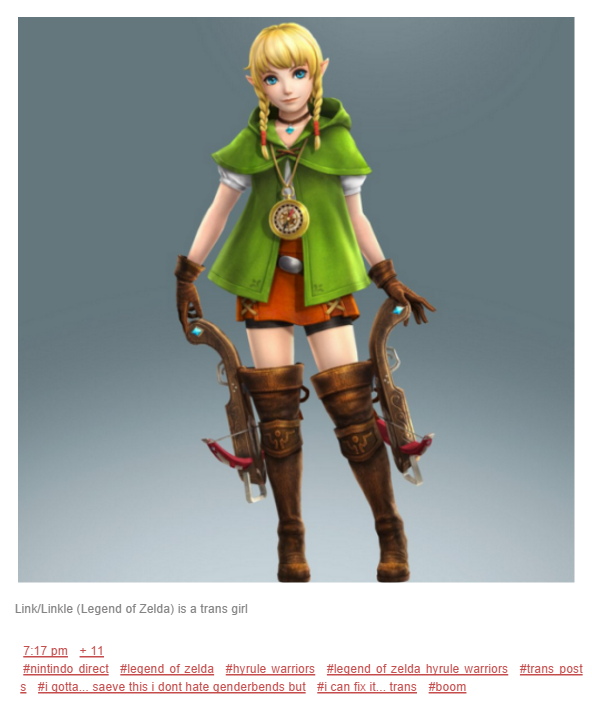 Me: *looks up Linkle on tumblr*
tumblr: Linkle is transphobic and here's why!!!!!!!!
me: *logs out of tumblr* why can't we have nice things?

Then we have this laughable editorial from Kill Screen…

Yet while most media coverage congratulated Nintendo for finally making a female version of the famed character an option, the actual context of Linkle’s existence reeks of that unique Nintendo brand of faux progressivism. It might sound good on paper, but in practice only shows how little Nintendo actually understands about what the problem is.
As Anita Sarkeesian might point out, Linkle is a classic example of the “Ms. Male Character” trope. Originating with Ms. Pac Man (another classic Japanese title), the Ms. Male Character is a “female version of an already established or default male character. Ms. Male Characters are defined primarily by their relationship to their male counterparts via visual properties, narrative connection, or occasionally through promotional materials.” It’s a trope that describes how, in an attempt to appeal to the wallets of their female demographic, male game designers will often reduce women to a bow, a skirt, and/or lipstick. There is virtually no distinction between the original male character and the Ms. Male Character other than superficial, stereotypically gendered aesthetic changes…
Here’s the bottom line that Nintendo refuses to see: when people ask “why can’t Link be a girl,” they’re not asking for the option to maybe play as a girl who looks like Link in a game with a Zelda-related title. They’re not asking for girls to be kept to the side, marginalized to a lesser product and project (anyone remember the Nintendo Girls Club?) Instead, they’re asking why—amidst an otherwise very female-centric mythology about three goddesses and a badass princess—must the “Hero” character always be a boy? Why is it okay to ask female players to identify with Link despite their gender differences, but at the same time have it be inconceivable to ask male players to do the same?

An Anita quote? That fucking charlatan doesn’t actually know jack shit about gaming, as she’s a fucking presenter who reads lines off a goddamn teleprompter. Why not just be for real and quote Jonathan McIntosh? I’m not saying he knows that much about them either, but that’s the man behind the curtain. Anyway, I’m getting off-topic. That was just one piece of the editorial. There’s a whole lot of crazy there that I didn’t show. I could just sum it up with this: SJWs are never happy. No matter what Nintendo does, they will be attacked by these nutters. The reason? Without some fake-ass controversy, they have no way to extract money and views from fucking idiots.
Personally, I’m fine with the new Linkle character. Not only that, I wouldn’t really care if they made Link a female, either. It’s not something I think makes sense, absent a slight re-imagining of the story, but if it was handled well I think it would be fine. Believe it or not, I don’t sperg out about my characters being male or female. Why? I’m not a rad fem cultist, that’s why. I’ve always enjoyed female characterizations in gaming, and I think most of my fellow gamers feel the same way. Let me know if I’m wrong down below. I’ll probably be updating this post with more salt after my LIVE show, by the way. I fully expect the freaks out to continue.
(Cover by @Verklagekasper)