The Simpsons Mocks “Woke” Idiots Who Were Mad About Apu Character

I’m a fan of The Simpsons, although I’m not one of these people who watch it every week. I’ve pretty much been watching the show on and off for its entire run, though. I guess that’s normal for someone my age (32), since it’s been on the air almost my entire adult life. So, when news came out last year that some progtards had a problem with the Apu character, I naturally heard about it. I didn’t watch the movie, because I don’t care. But I did hear about it.

As it turns out, the writers for The Simpsons heard about it, too. Not only that, they actually addressed it in last night’s show. Unfortunately for the people who were mad about Apu, they pretty much mocked the concern and made fun of the issue itself.

“Something that started decades ago and was applauded and inoffensive is now politically incorrect… What can you do?” pic.twitter.com/Bj7qE2FXWN

Marge: "Some things will be dealt with at a later date."

~ Both stare blankly at camera. ~

Wow. “Politically Incorrect?” That’s the takeaway from my movie & the discussion it sparked? Man, I really loved this show. This is sad. https://t.co/lYFH5LguEJ

HAHA, they even included this politically incorrect photo, just in case someone missed the original mockery… 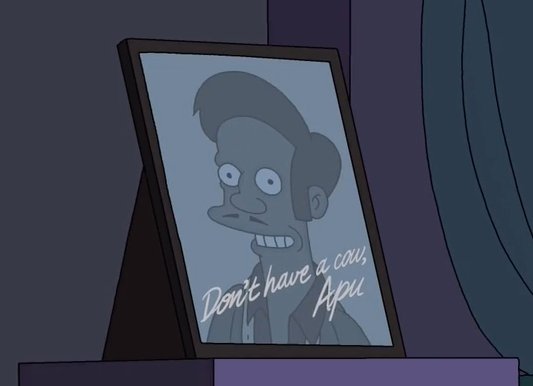 Man, I have to hand it to the writers on this one. I didn’t expect them to address this issue at all, much less make fun of all these “woke” nutters who complain about stupid shit like this. Bravo.

I would write more about this, but that pretty much sums it up. Also, I have to take my sick family member to the doctor, so that should be fun. Sorry for the shortage of posts lately, but good ol’ “real life shit” has been rearing its head a lot lately. Even so, I’ll be posting some more stuff later today from the coffee shop.