This one is almost too insane to even contemplate. Last night before I went on the air with the latest edition of the #Killstream, Rancid Randi Harper put out a missive about what she would like to see done to Twitter. It was basically a hodgepodge list of “fixes,” a couple of them I could even see being beneficial. The problem has little to do with the suggestions themselves, even though I don’t agree with them all. The issue at hand is how the CEO of Twitter, , fell all over himself to run out and kiss Hamburger Harper’s sizable ass in public. This is a woman who has been at the center of some of the nasitiest abuse in internet history. It not like it isn’t well-known, either. I’ve documented a ton of it myself.

Gems such as these:

Randi Harper Flat Out Lies About Neutral Critic, Claims She Has Ties to Roosh V

Oh yea, and this one never gets old…

This is all excused because she’s a “woman in tech.” Witness Mr. Dorsey embarrass himself. Although let’s be honest, being the CEO of Twitter is pretty embarrassing lately in and of itself… 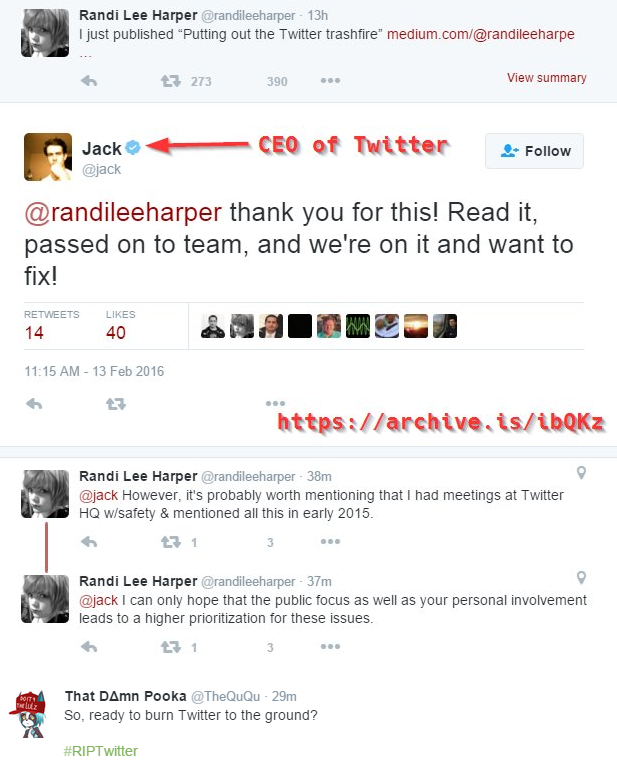 I can’t for the life of me understand why this clown keeps making moves that are destined to kill his own company. Maybe politics are more important to him now. Perhaps he sees the writing on the wall and knows that Twitter is going to be gobbled up by Google or Facebook. Still, I would think that keeping the value of the stock and its brand as high as possible would be advisable, but that’s just me. Dumbass Dorsey would rather listen to Randi Harper and hang out with the race-baiting DeRay Mckesson. #RIPTwitter might become a reality if this fool doesn’t change course soon. I don’t expect him to do so, though. It looks like he’s now 100% committed to “social justice.”