I’ve been fucking around all day, but I have a lot to catch you up on. I got another post coming up on her with more of the SJWs piling onto Wu because of her meeting the other day with Stardock’s Brad Wardell. Some of you may have seen it, but it’s still worth a post, I think.  But before we get to that, let me recap today’s news concerning TotalBiscuit. I want to be clear that we’re not trying to go after, or call out, the PR woman. All has been resolved. I just wanted to show you what ethics looked like, since we don’t see very much of that from the likes of Kotaku, Polygon, etc.

Here’s the beginning of the situation, starting with TotalBiscuit:

https://t.co/XXonfb0oeC < Completely inaccurate. We have never charged a developer to cover their game. Only taken offers that came to us

Every game covered on WTF is was done either with review code or a copy I bought myself. We have never charged a dev for it.

What pisses me off even more is that the company this person represents, Plan of Attack, sends us games and KNOWS we dont charge

I was getting ready to write up a column going at this woman, but I waited. It’s a good thing I did, because she did what a real professional is supposed to do. When she saw that she was wrong, she admitted her mistake publicly, apologized, and gave a short testimonial: 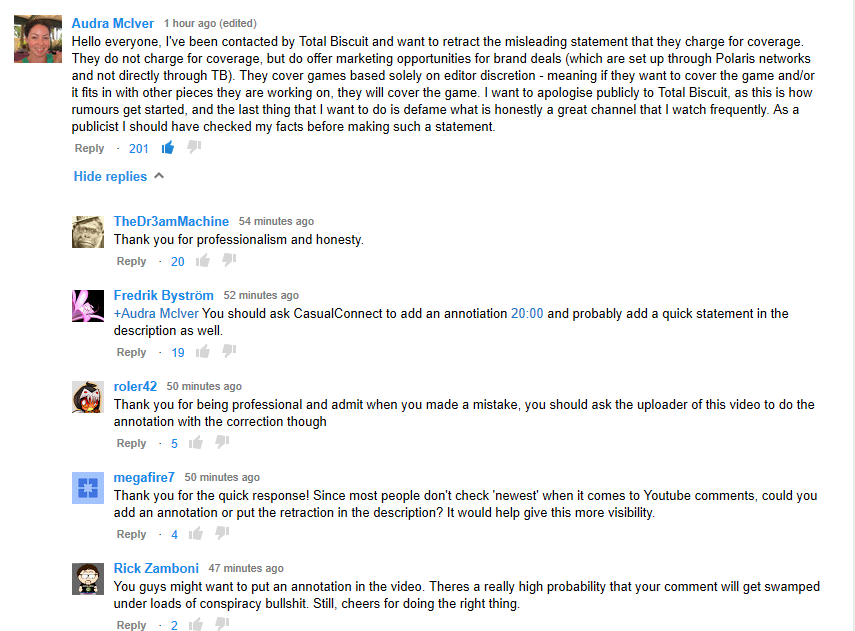 Since the young woman owned up to her error so quickly, and without qualification, TB made sure to tell people to hold off on going too hard on her. She’s allegedly done work for Wu in the past, so people were a little jumpy at first. That turned out to be unfounded, thankfully. Biscuit said to just leave it at that, and everyone did.

Again, this post isn’t meant to make the young woman look bad, that’s why I’m not even using her name or company. I just wanted to highlight some ethics. TB is right, we should celebrate the actions of this woman today. Contrast that with the people we’ve been fighting against. If only the game journos and SJWs would take a page from the PR flack’s playbook.