There was more than one weird happening yesterday. It’s not the biggest story, but it does involve myself. In case you hadn’t noticed, this is my site. So, I figured why not talk about the tweet that the SJWs from Amazon tried to frame Anne Rice for making earlier. The faked tweet was made out to yours truly, which is how I’m involved. So, let’s recount the details, complete with a response from Anne herself. 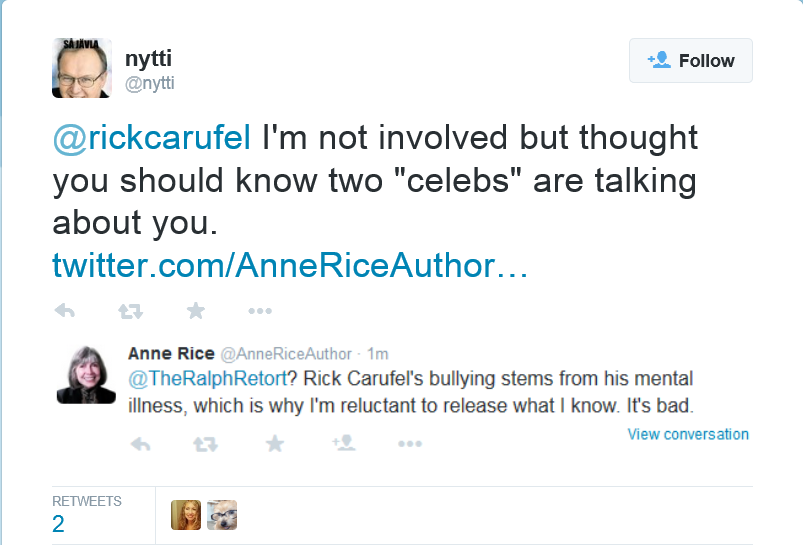 It smelled fishy from the start. Some people I asked to check it out said it was almost 100% fake. Then I got these tweets later explaining it in more detail:

Then Wilford Brimley got a fucking attitude with me, telling your intrepid editor that I needed to prove his own claim. I can’t show you the tweet he made, since he deleted his account. I didn’t think he would be that big of a bitch, but he is (he also allegedly sold coke at one point):

.@rickcarufel I don't have to prove anything. You made the claim, you prove it's true.

The fine folks at Stop the Goodreads Bullies did a write-up on this episode as well. Here’s some of what they wrote:

We know this is fake for two reasons.  One is that Anne never participates in Twitter conversations.  The only time she uses Twitter is to share her Facebook posts and to retweet her sons tweets that talk about his activities.  That’s it.  That’s the only time she uses Twitter.  The second reason we know this is a fake is because Ralph contacted us via Twitter to let us know this tweet to him never took place.

Anne Rice herself chimed in down in the comments section:

Yes, I knew they could, Anne. Months of experience with the trolls and haters has taught me that people will go to extreme lengths to fabricate evidence so that they can smear those they dislike. It’s just part of the modern landscape. Luckily, we also have people who can show you how they’re full of shit. That’s what happened tonight.