I can’t wait to witness this clusterfuck. Brianna Wu is in the headlines once again, and the mainstream media is actually pretending like she’s not 100% batshit crazy.

Brianna Wu, a game developer who stood up for women facing harassment in the game industry, has decided to run for the U.S. House of Representatives. She hasn’t officially announced she will run yet, but she posted the picture below on her Facebook page earlier today. And she confirmed via email that she is serious.

Wu, a Democrat, said the campaign for hasn’t officially kicked off yet, but she is assembling a team of advisers to help set her agenda.

“My main agenda will be economic. Here in Massachusetts, taxpayers spend an amazing amount on subsidizing education – particularly with infrastructure. But then students and entrepreneurs take that investment by our state to San Francisco or Austin,” she said. “I think we can do a much better job keeping startups here in our state. Also, look at the game industry, which has been devastated here in Boston with the loss of Irrational and others.

“I’d hope to serve on the House technology subcommittee. It was very disturbing to me to see members of the House tie the Mirai botnet (malware that hijacks computers) to the Stop Online Piracy Act (SOPA), simply parroting special interests. It’s an example of how our tech policy doesn’t serve the American people. We need people making policy that actually understand technology, that understand the assault on our privacy. It’s a national security issue, and we’re failing badly.”

This image is also included in the report:

I’m not sure what Wu thinks has been won, exactly. Her preferred candidate for president, Hillary Clinton, lost in one of the most humiliating upsets in American political history. Wu put out some trashy game and got verified on Twitter (so did I, minus the trashy game part). On what planet does that qualify as a victory? 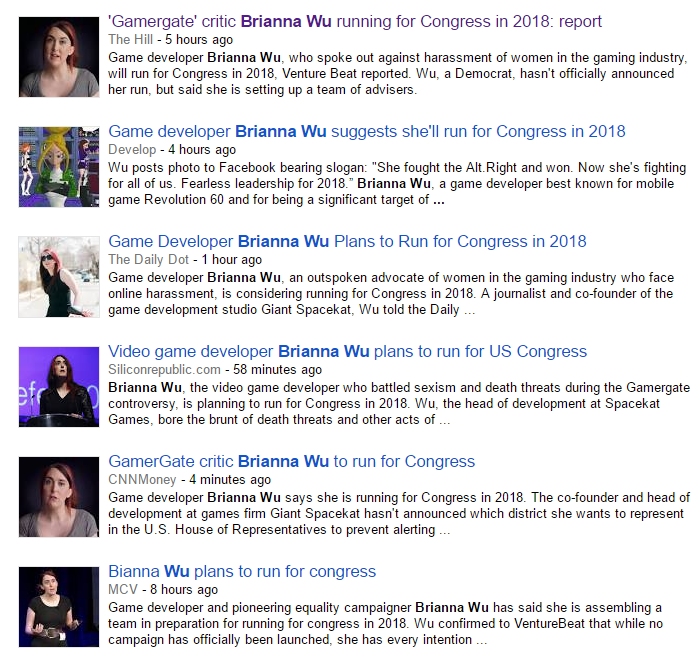 This whole thing is madness. I’m still not 100% convinced that it’s anything but a media stunt. This nutcase will do literally anything for attention. I could definitely see Wu pulling back at the last minute. Then again, even a losing campaign (which this one will almost certainly be) would net the loon some more media coverage, which is what she craves. I don’t see why the media is taking this so seriously…except for the fact that it gives them cheap headlines. I guess I can’t shit all over that either, since I’m writing about it too. But the point is I wouldn’t be if they weren’t playing Wu up as some kind of legitimate political threat. Brianna is talking about running in Massatuchtess, so presumably she will have to go up against an entrenched Democrat who has all kinds of political support and capital.

I, for one, don’t like Wu’s chances. I do like our chances to laugh our asses off at this if it actually happens, though.