One disturbing trend over the last year or so has been the move by SJWs to attempt to normalize pedophilia. Make no mistake about it, there will always be some percentage of the population who are pedophiles, no matter what we say or do. I do believe it’s a mental illness. But, that doesn’t mean the media should be making attempts to make this behavior seem mainstream by publicizing it. This isn’t depression. It’s disgusting and should only be talked about with a trained medical specialist, not Salon.com.

But, they don’t care. All they want is the clicks. So today, they once again returned to that well.

Todd Nickerson began to suspect he was attracted to young girls when he was 13-years-old. At 18 he regularly babysat a five-year-old girl and eventually “fell in love” with her. Because he was molested at age seven, he knew the damage abuse caused and did not want to hurt the little girl. He packed up and left town so that he did not offend.

He later came out to his family as a pedophile.

Nickerson, now 43, says he has never abused a child and never will. He is involved in a website called “Virtuous Pedophiles” that provides an online discussion forum for people that are attracted to children but do not want to act on it.

Keep in mind, this is the same guy they let write TWO long editorials for them last fall. Keep an eye on this topic, as you’re sure to see more attempts at mainstreaming this behavior. Virtuous Pedophiles? Jesus. I’m glad that many of them decide not to act on their urges, but it’s insane to promote this sickness.

Oh, and don’t forget about this image from the last post… 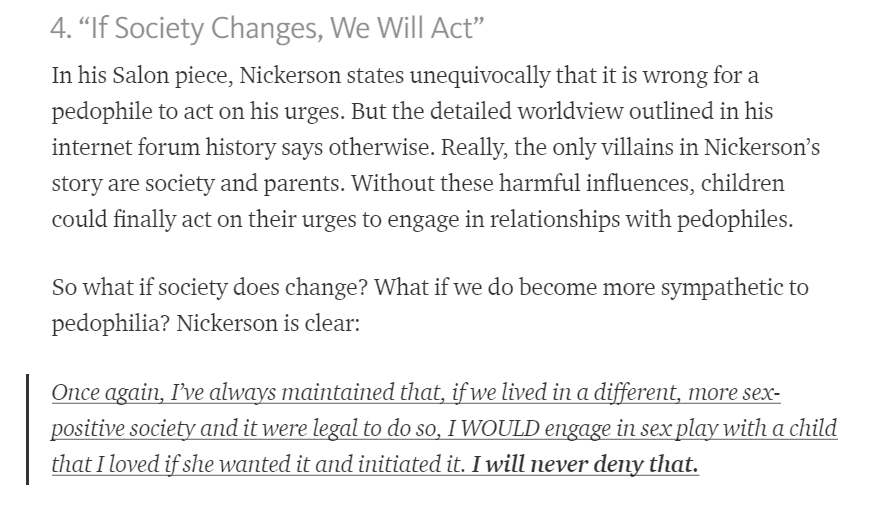