I’ve thought about this for awhile now, and me letting loose on the stream only confirmed it. I’ve had some great times these past 7 months, and made some awesome friends as well. The experiences we’ve shared will never be forgotten. Man, when I sit here and think of the community we’ve built just on this site alone, not even counting the larger GamerGate collective…it makes me swell up with tears, because I know how hard we all worked. But all good things must come to an end.

Quitting isn’t easy, but I have to say goodbye.

But don’t worry, it’s not goodbye to GamerGate, or to exposing SJWs. It’s goodbye to acting fake, in any way. There are some people in our movement (O GOD HE SAID MOVEMENT AGAIN) who I just don’t care for. So it’s goodbye to acting like I do. I spoke about one of them last night, and I don’t regret it in the least. He leaked private emails that I had sent to him in confidence, so I let people know what I thought about that sort of thing. Did I use some colorful language? Perhaps. But the owner of #2 Chan hardly has any right to be upset with that sort of thing, especially when he leaves a thread up on his site solely dedicated to harassing me (people calling for me to be swatted, address and IP listed). This is not nobility. It’s being a dick.

And all this goes double for all the fake fucking trolls on Twitter. Speaking of those trolls, they concocted a scheme to bait me into saying some dumb shit on Twitter (which I admittedly did), and tried to paint me as a transphobe. It now looks like this “Taylor J” person possibly doesn’t even exist in real life, and is some 3rd party troll looking to cause trouble. She was seen cozying up to Sarah Butts back in the fall. They openly talk about a plan to destroy me, for fuck’s sake…and some idiots actually bought into this. 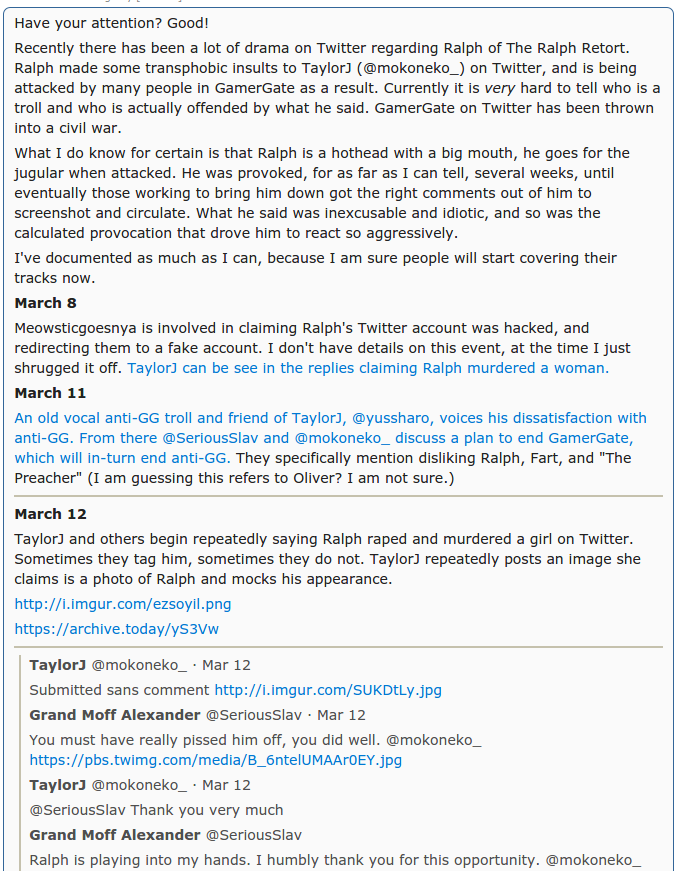 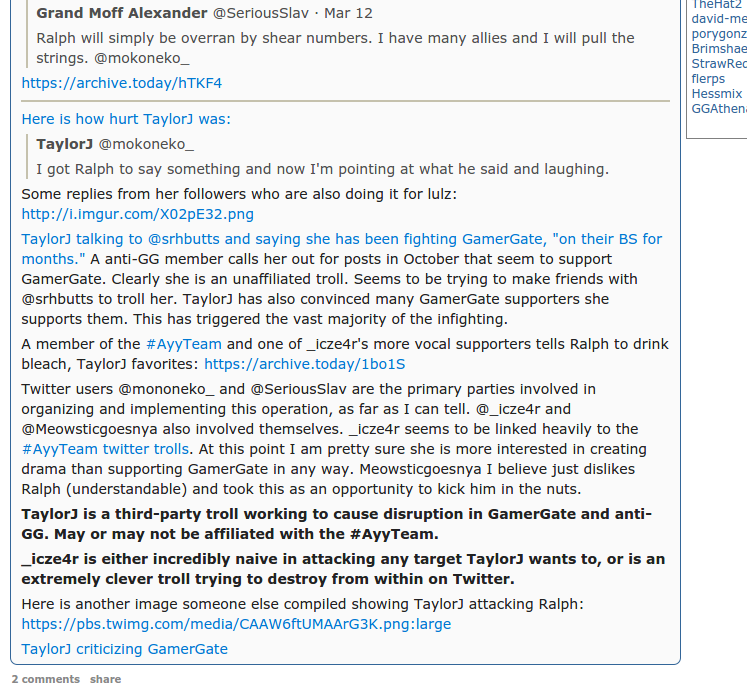 So, in short, I’m tired of pretending to like people who obviously don’t care for me (like @_icze4r, ED article HERE), leak my private emails, and allow threads on their site to be dedicated to my downfall. It’s well within my rights to tell you that I don’t care for folks like that. Continue to frequent #2 Chan. That’s a good idea, in fact. I know I will. There’s plenty of great information there…/gamergate/ has been fair to me so far (unless they banned me after last night, not sure lol). But the owner is not someone I personally respect. When other eceleb threads on baphomet get removed, but not mine, it’s personal. If you don’t agree, that’s fine. I’m just telling you my view. I would hope that you all would respect that, even if you don’t to subscribe to it yourself.

As for GamerGate, I’m never leaving this motherfucker. Third party trolls and people who don’t like me won’t stop this site. Hell, there’s an army of SJWs who don’t like me either. It hasn’t bothered me before, and it certainly won’t start getting to me now. We don’t all have to like each other in order to win. But the days of me pulling any punches, are over.

Good-Bye to All That.