Before RogueStar, I was going to talk about a certain hashtag, #GiveYourMoneyToWomen, that was setting Twitter on fire yesterday. I didn’t get in on it myself, because I was too busy arguing about drama, but rarely have I seen such a display from the rad fems. Many of them were pimping out their Amazon Wishlists, offering up their Patreons, anything you could imagine. This is all pretty tacky, as my grandmother would say…but hey, at least they’re finally being honest.

If you’re giving a woman money for good work, I don’t have a problem with it. But many ideologues were treating this is an organized campaign to collect loot:

Look at the black SJW go at the white women. It’s always hilarious to see that: 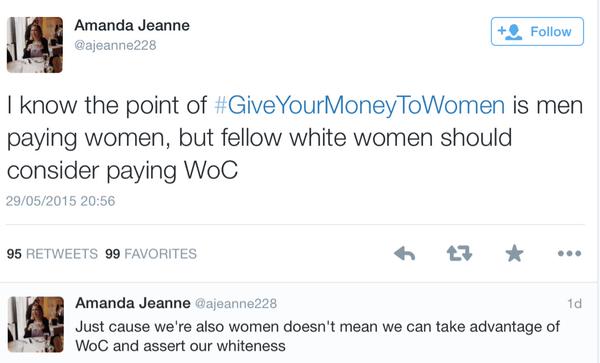 The despicable Shanley even got in on the act: 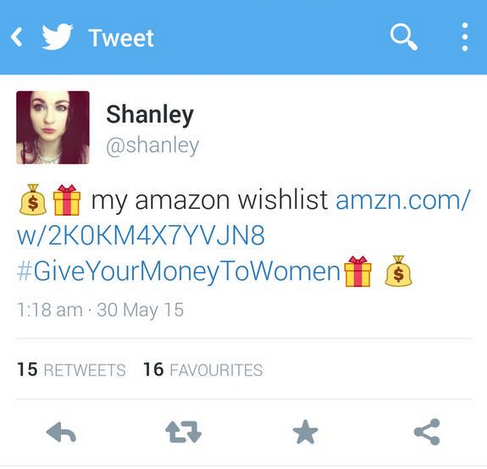 Here’s a one more before I get to the rebuttal:

It’s a brazen play for people to dump money into their laps for no reason whatsoever. I should be mad at it, and I am…but just a little. Because when you think about it, they don’t look good with something like this. It’s trashy. A fool and his money will soon be departed anyway, so you can never stop that. I guess it would be more disheartening to me if I was a women, though. As you can see below, rational ladies didn’t take kindly to this pathetic ploy:

Feminists: don't patronize or infantalize us! Unless we're hitting you up for cash. Then it's totes awesome. #GiveYourMoneyToWomen

#GiveYourMoneyToWomen — sure…what are they offering? Did they make something of value to sell?

No? Then I’d rather donate to charity

I think it’s safe the say the radical SJWs were blown out here. That was only a small sampling of the ass-kicking they took, by the way. I have to sleep sometime. We would be here until noon going over shit. Unless of course it’s noon right now when you’re reading this, in which case you still understand what I’m saying. These greedy ideologues were much clearer with their message, though: Give me your money. Earning has nothing to do with it. We just want money. That’s exactly what most of us have been saying their goal was from the start. We really should thank them for yet again shooting themselves in the foot.