Kamiya Trashes Mighty No. 9, Calls It a “Copy” & “Insult to Old Home” Capcom

Longtime readers know that I’m not a big fan of Mighty No. 9, or the team behind it, Comcept. I actually had nothing against them going into GamerGate, but the way they’ve treated their customers over the last year has been abhorrent. They kept Dina Karam on staff, even after she cheated backers out of their rewards by having them banned from official forums for trifling reasons. Even after repeated attempts to bring this to Comcept’s attention, they still kept this woman employed. She was eventually eased out, but according to them it was at her own discretion. Now, I’m not sure I actually believe that, but that was the story. So, fuck ’em. I’m not the only one who thinks that way. As it turns out, so does Platinum Games’ chief Hideki Kamiya.

Granted, the reasoning is different. Still, he took a big shit all over Comcept yesterday: 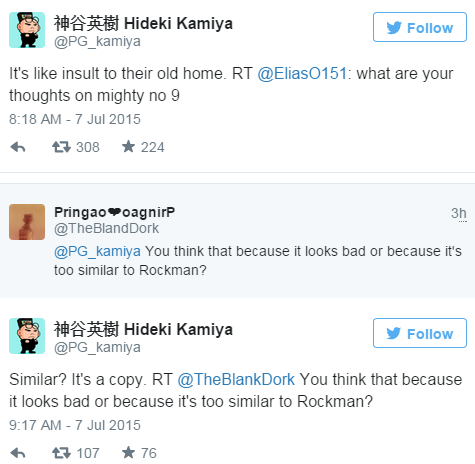 Ouch. “It’s a copy.” If only. I would say “poor imitation,” myself, but why split hairs? It’s shit, and everyone knows it. When is the fucking thing even going to come out? OK, I just looked. September, apparently. Well, good luck with that. Ringing endorsements like this one will be sure to grease sales.

Kamiya, please keep busting the heads of Comcept. Of course, it’s not like this is a new occurrence. He’s certainly made no secret of his thoughts about Keiji Inafune in the past.  I wouldn’t expect him to let up on the barbs. Then again, he was responding to a question  both times. He didn’t go out of his way to trash people, it’s just Kamiya being honest.

He's a business man. Not a creator. RT @Sylverstone14: Are you a fan of Keiji Inafune's work?

(Forbes also put out an article about this a couple hours ago.)