I’ve only talked about Bill Cosby a couple times since all the rape allegations have come his way. I have to admit, it doesn’t look that great for the legendary funnyman, but then again, I always let my loyalties lie with the defense. In other words, if someone is guilty go prove it in a court of law. I’m not interested in what’s supposedly proven in the court of public opinion. I’ve talked about that sort of thing here on this site before and my opinion hasn’t changed one bit. So, what’s controversial about declaring Cosby’s innocence? I mean, the guy still is innocent as far as I can tell. He hasn’t been convicted of anything.

Kanye West did in fact declare Cosby’s innocence last night, although it’s hard to tell if he was serious or just trolling those who are easily trolled. Either way, it has set off a media firestorm…

Take a look at the Google News results for this story… 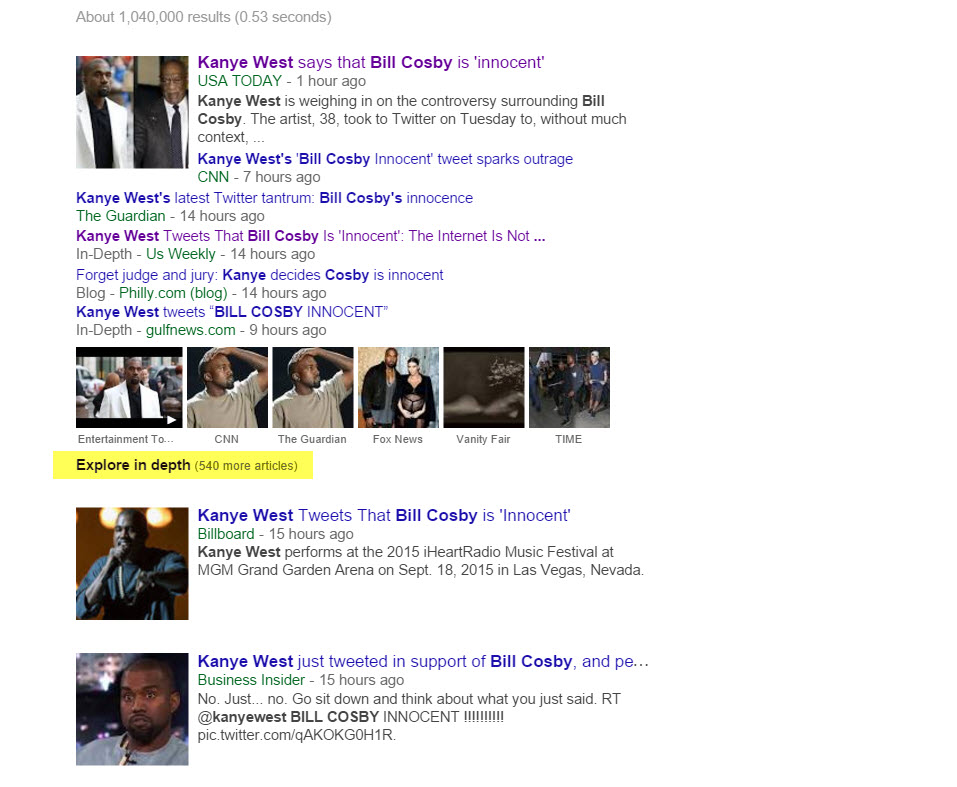 Just about every news outlet in the world has filed a story about this. I guess that’s not a bad thing, since Kanye’s new album supposedly drops tomorrow. That might have something to do with this tweet, to be honest. Although, I kinda lean towards Kanye actually believing it. The statement is still up and he hasn’t apologized, despite being urged to do so from dozens of activists, reporters and celebrities.

Kanye!! You can't be for real. FIFTY WOMEN. With nothing to gain thanks to a statute of limitations ON RAPE. Oy. https://t.co/3ekYD43uMs

@kanyewest for fuck's sake, standing up for a serial rapist is not some cool "Ye so crazy!" shit. Get your shit together.

@kanyewest Kanye please don't do this

Those are just the major ones that stuck out. I also left GIF replies off the list, but there were literally hundreds of those, if not thousands. I have no idea if Kanye was serious or just trying to promote the new album, but I don’t think there’s anything  wrong with what he said. Why should anyone be offended by a celeb proclaiming Cosby’s innocence? It’s not like it affects your life in any meaningful way. If it really makes you that angry just stop listening to Mr. West’s music and block him on Twitter. Cosby will soon have his day in court, but the sad thing is, even if he’s acquitted these types of people will never let it drop. The court of public opinion is the only thing they care about and it’s kinda sad.