Leigh Alexander Reminds Me Why I Fight

I’ve been battling SJW-lite on Twitter all day, but I figured I would take a break from that madhouse, to come and write an article here. Actually, I should do that a lot more frequently. The petty bickering between the warring factions within GamerGate does nothing to further our cause. Shining a light on the hypocrisy of out opponents, at the end of the day, is the main fucking function of this site. No one is a bigger hypocrite than Leigh Alexander, and her recent antics reminds me of why I started this job in the first place. Believe it or not, I didn’t come here to fight third and fourth tier wannabe web entrepreneurs. No, this is all about fighting the SJWs who threaten to ruin our hobby. And if you look at what the aforementioned Ms. Alexander put out the other day, you could say she’s trying to escape the scene of the crime. Despite being the #1 person pushing the bogus narrative about gaming, she now wants you to know that bad stuff isn’t true. Well…most of it, anyway:

Worse, you’ll have the moral panic, sinister insinuations that violent video games can be correlated with murder. This is especially common on crime shows – you know, where the suspect likes games and therefore probably can’t tell the difference between fantasy and reality, or something (like inthis 2006 episode of Law & Order).
To the lifelong video game fan, there’s almost nothing more grating than how the film and TV world portrays its precious hobby…
I know the world of game design, creation and play doesn’t resemble Law & Order’s sensational sketch…
Most concerning is the way the show plays with the idea that playing video games can desensitize you to real-life violence, even make you a better shot with a real gun. These are all dangerous and untrue assumptions.

Excuse me if I don’t feel your pain, Leigh, especially since you are the main one responsible for the phony narrative currently assaulting gaming’s reputation. How can someone so culpable try to minimize their offenses? Don’t get me wrong. She still takes plenty of shots at us during the article. She’s clearly trying to soft-peddle her role in all of this. At the end of the piece, she tries to make excuses for what happened, basically saying it’s not her fault people are shitting on video gaming right now. I still these poor, put upon women that deserve your sympathy, and not the gamers who are getting trashed:

Like, if not for women like me, the writers of Law & Order would understand the innate cultural validity of video games, they presume. There would be a more flattering and nuanced portrayal of gaming, if only us women would stop pretending that we are a little bit afraid to be here sometimes.

Leigh is nothing, if not consistently dishonest. She praised GTA IV and the Rockstar brand of comedy, only to turn around and trash it at the first sign that it could help her flagging career. What else would she be willing to do to get ahead? Almost anything, it seems. 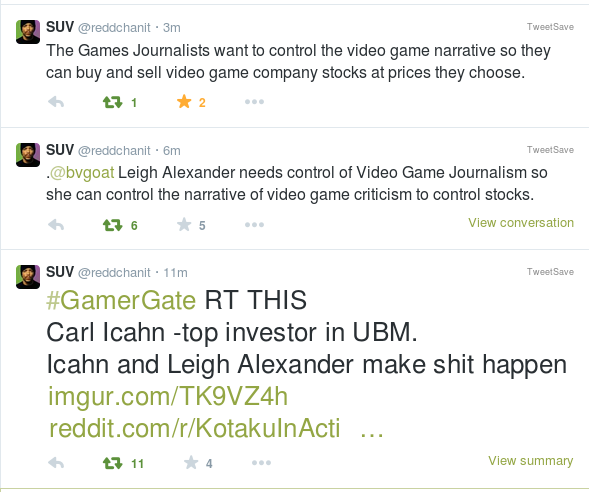 This is the shit I care about, not petty squabbling between people who are supposed to be on the same team. I’m gonna keep doing what I do, and I make zero apologies for that. People like Leigh Alexander need exposing. If people don’t like what I do or how I do it, I suggest they go fuck themselves. Because I will never be run out of what I love doing, simply because some trolls and malcontents don’t appreciate my style. I’m gonna focus on the mission at hand, and not petty bullshit. I can’t speak for anyone else.