At the start of GamerGate a notion was expressed to me that I hadn’t really thought of before. Basically, it goes like this: as YouTube personalities gain in prominence, traditional print/online media is going to become secondary, and possibly even obsolete. This wasn’t something I could ever remember conceptualizing, because I’m one of those weirdos who likes to read articles instead of watch videos. That’s one of the reasons I was so eager to join in with GamerGate. I’ve seen the descent of these sites over the years, because that’s where I spent most of my time.

If you’ve been on Twitter the last hour, you see what I mean. I went back and found some of my old Kotaku comments from 2012:

I was in this before I ever heard of Zoe fucking Quinn…#GamerGate pic.twitter.com/rC2eFVecJU

Man, I'm really digging the 2012 version of me in this thread. Dude was on a roll…#GamerGate pic.twitter.com/kgB9mXbo9i

This was right around the time they start pushing Anita Sarkeesian without any shame whatsoever. That thread was actually one of the last times I saw a decent debate on her victimhood tour of lies. I eventually became even more disgruntled, but I still visited the site often. Over time, it became so bad that I would be put off by some SJW article every time I visited. That continues to this day, even though I no longer visit Kotaku, outside of my work here.

Ever since GamerGate began, I’ve found myself watching more YouTube videos, although I still prefer print. There’s something about seeing someone else play too much of a game that turns me off (if I haven’t already played it). I guess it’s the spoiler effect. Still, my habits move a lot slower than the rest of our community. Over the last six months, the trend towards YouTube has started to make corrupt journos openly worry about the future of their “profession”.

So many of them complain about TotalBiscuit’s prominence among Steam curators, which is of course owed to his YouTube presence. Today, Ian Cheong, forever known on TheRalphRetort.com as Little Hitler, let his fears and frustrations spill out into the open, just like Kuchera did a couple weeks back:

Ben Kuchera upset that the SJWs have no power in Steam, a place more or less in control by the users. #GamerGate pic.twitter.com/DdWYsHayZY 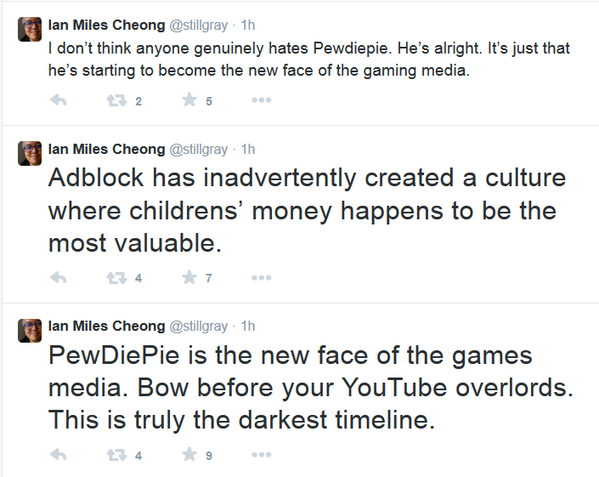 It’s simple, really. These SJWs can see the writing on the wall, and it spells doom for their entire way of doing business. YouTube and the proliferation of websites like this one, has democratized content in a way that it previously was not. Their used to be a higher bar that you had to clear to be a producer…now there isn’t. The outright garbage that once went by with only a few gripes, is now rationale for quitting the mainstream gaming sites altogether. I can see why these ideologues are frightened. Their stranglehold is coming to an end even quicker than we had hoped.