Meet the Fat, White LARPer at the Center of the Evergreen State College Madness

I am a bit late to this Evergreen College nonsense, and for that, I apologize to you all profusely. There’s so much insanity here that I am ashamed to have missed out on it for this long. In case you missed it, a professor at the university, Bret Weinstein, objected to some nonsense progressive retardation and said that other professors were afraid to speak their minds on the issue. His point ended up being proven, since after his semi-private email chain was leaked by the nasty piece of work who runs the school newspaper, radical activsts have demanded his suspension and threats to his safety forced him to hold his last class off-campus.

These are some of the comments that caused him to be branded a racist. Read this and tell me if you can find any kind of racism whatsoever…

Weinstein expressing opposition to the proposal by the council had this to say “From what I have read, I do not believe this proposal will function to the net benefit of Evergreen’s students of color, in the present, or in the future. Whatever type of vehicle it is, I hope we can find a way to discuss this proposal on its merits, before it moves farther down the line. I am concerned that we are becoming a college where such things can neither be said, nor heard, and I know that I am not alone in this sentiment.”

Wow, that’s practically white supremacy in the flesh! Oh yea, and the guy also appears to be Jewish, but don’t let that stop you, progtards.

Oh, and Mr. Weinstein also said the whole “day without white people” that was planned for Evergreen pretty much fit the definition of oppression.

“There is a huge difference between a group or coalition deciding to voluntarily absent themselves from a shared space in order to highlight their vital and under-appreciated roles (the theme of the Douglas Turner Ward play Day of Absence, as well as the recent Women’s Day walkout), and a group or coalition encouraging another group to go away. The first is a forceful call to consciousness which is, of course, crippling to the logic of oppression. The second is a show of force, and an act of oppression in and of itself.”

Yes, the professor happens to be entirely correct in the above analysis. This isn’t some right-winger going off, just a left wing professor concerned about his college getting more and more batshit crazy. He went on Tucker Carlson last week to talk about all this, which had the effect of enraging the snowflakes on campus even more.

A professor said he is facing calls to resign after he disagreed with a group of activists calling on white students to leave campus for a day.

Weinstein expressed his disagreement with the plan in a statement, which led to the activists confronting him on video and demanding he resign…

He said the activists blocked campus police from entering the building where they had cornered him.

He added that even after the initial incident, college president Dr. George Bridges has ordered police to stand down from any action against the activists.

“This is something out of another country,” Tucker Carlson said.

Weinstein said he is a “very progressive” person politically, but is in disbelief in what leftist elements like the group of activists are trying to do.

Again, this guy is a progressive himself and he’s facing calls to resign because he’s not “woke” enough to his supposed white privilege. I did a small amount of digging and traced the epicenter of this outrage to some fat white skank who writes for the student newspaper there on campus. The aforementioned Ms. Felix Chrome (which is undoubtedly a fake name) claims to be a person of color, but I will let you be the judge. 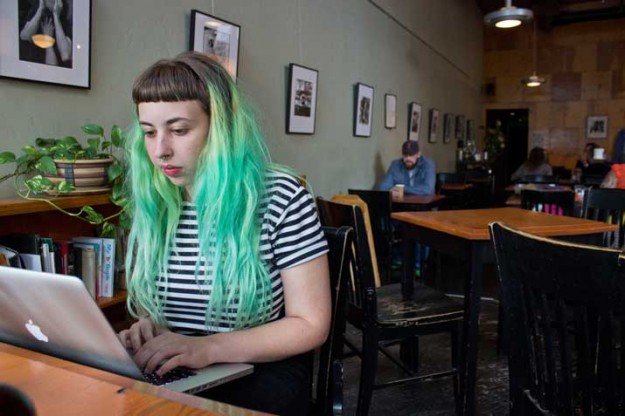 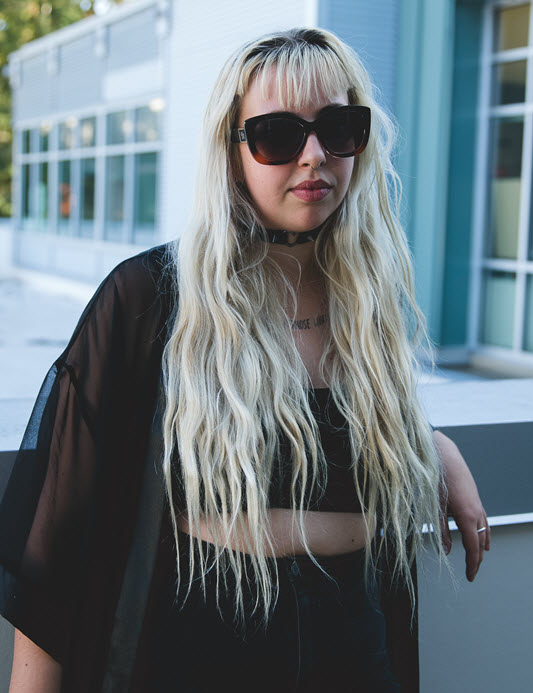 That last photo is from her official bio on the newspaper site. It reads…

Felix is the Editor In Chief and coordinator of the CPJ. When she isn’t working on the paper she studies critical theory and experimental poetics. Felix likes to read and loves to party. Felix likes to read and loves to party. According to her OkCupid she spends her time “working on becoming a liberal arts school drop out, borrowing books from like library and not reading them, and pretending to write poetry.” If she isn’t at the salon of [sic] spending all night in the office working on the paper, you can find her downtown drinking shitty beer and talking about anarchy. Please don’t talk to her about work.

So, she’s an anarchist loser who thinks she’s a bigshot now that she’s one of the few among her community who can string a few sentences together. Again, she’s clearly white, but if by some chance there is another kind of heritage in that sickening frame (dubitable), Chrome would definitely pass as white anywhere she goes. That makes her claims about being a put upon person of color all the more laughable.

Just read some of this trash…

Constantly being immersed in conversations about race and injustice will take its toll. The first time I took an African American history class, I started self harming. I found it completely overwhelming, just trying to deal with the pain caused by constantly thinking about the long list of traumas Black people have faced in this country…

When writing these articles I sometimes find myself having to spend hours researching Neo-nazis, sifting through racist propaganda and legal paper work, or spending hours and days reading the words of faculty members and people in authority who blatantly don’t care about the struggles we all face as POC…

This is where allies should really come in. As POC we don’t have the ability to step out of the oppression we are fighting against. It’s important to remember there are people who do have the ability to step outside of these issues and they can and should be called upon when the weight of the issues starts to be too heavy. I am not saying don’t go to these things just because we are dealing with issues of oppression all the time. I’m saying it’s okay to take a step back to ensure you are able to give your full energy once you’ve allowed yourself time to recharge.

This LARPer is certainly comical, although there is something truly unfunny about the way her and the associated thugs on Evergreen’s campus have tried to destroy Professor Weinstein. Then again, these progs are pretty much reaping what they have sown. Decades of giving in to whatever new radical fad hits campus are now causing some of them to be afraid for their own jobs and even their lives. How long until one of these nutters takes someone out?

By the way, the students presented the university with a list of demands. Among them…

A coalition of black students demanded the Evergreen Police be disarmed and expansions in their facilities or power be blocked; Evergreen Police Officer Tim O’Dell be suspended for his behavior toward protesters earlier this week; Weinstien [sic] be suspended without pay; Andrea Seabert Olsen, the Assistant to the VP of Student Conduct, be fired; sensitivity and cultural competency training for all faculty and staff; Changes to the student conduct code must have democratic student consent; the creation of an Equity Center; the coordinator of Trans & Queer Center be hired in a permanent full time position; and the creation of a permanent position dedicated to supporting undocumented students. Other groups of students have also submitted further demands that will be responded to by the administration in the coming week.

The truly amazing thing about this list of terrorist demands is that Evergreen President George Bridges ended up implementing most of them! It’s hard to feel sorry for these people when they keep caving to plainly pernicious activists.

Bridges complied with many of these demands, but said  “I have no plan to disarm the police at the [sic] point” and he would not fire anyone or discuss any personnel matters based on student requests. When these announcements were made students expressed frustration, saying that these two issues most immediately affect their safety on campus…

The steps Bridges did agree to take include the creation of an Equity and Multicultural Center on campus; mandatory anti-bias and cultural competency training for all faculty and staff beginning Fall 2017; the creation of a retention specialist position for supporting undocumented students; and increased budget for First Peoples’ Advising.

What can you really say to a cuck like this? Congratulations on not cucking out all the way? The whole thing is just pathetic. Not every student on campus is a nutjob, however. Many of them see the damage this is doing to their degrees and to their university (this has happened recently in Missouri).

This is a quote from a current Evergreen student…

We don’t get grades in the first place. We get credits and performance reviews which you can choose to have attached to your transcripts or not. So, essentially, you’re already on it. Every student gets full credit for their course, and if they don’t, they appeal it and argue that they did their best and end up receiving full credit (if they don’t they blame the faculty). It’s a total joke, but it’s the closest I am to a 4 year degree school. Events like this piss me off because I can feel my degree losing value. Like, “Yeah… erm.. I have a Bachelor in Science..” “Oh where from..?” …”*cough* The Evergreen State College *cough*”. For anyone that ever considers Evergreen, I suggest you stick to night and weekend classes, and to the sciences. Otherwise welcome to batshit crazy city.

I think that just about says it all.