Well, I was looking for a story to write about, and here it is. Somehow, I missed this earlier today. I guess I need to get back in the game more. In case you’re wondering what “this” is, I’m talking about Anita Sarkeesian coming out and trashing not just Hideo Kojima, but the entire Metal Gear Solid series. Keep in mind, this is all over an action figure having life-like breasts. Apparently, this is gross and encourages sexual assault (of an inanimate object, but why be sticklers?). To say this is nutty would be an understatement. It’s #FullMcIntosh.

Here’s the fraud herself over at Forbes.com:

“The production of a doll like this where players are encouraged to physically molest an already hyper-sexualized female game character’s breasts is gross, but should not be at all surprising, at least not to anyone who’s been paying attention to the Metal Gear Solid series,” she says. “This doll is completely consistent with Kojima’s ongoing pattern of sexually objectifying the majority of his female characters. For just one of many examples, in Metal Gear Solid 4, during Snake’s therapy sessions, the developers built in a mechanic where the player is encouraged to shake the sixaxis PlayStation controller to jiggle the breasts of the protagonist’s PTSD counselor.” 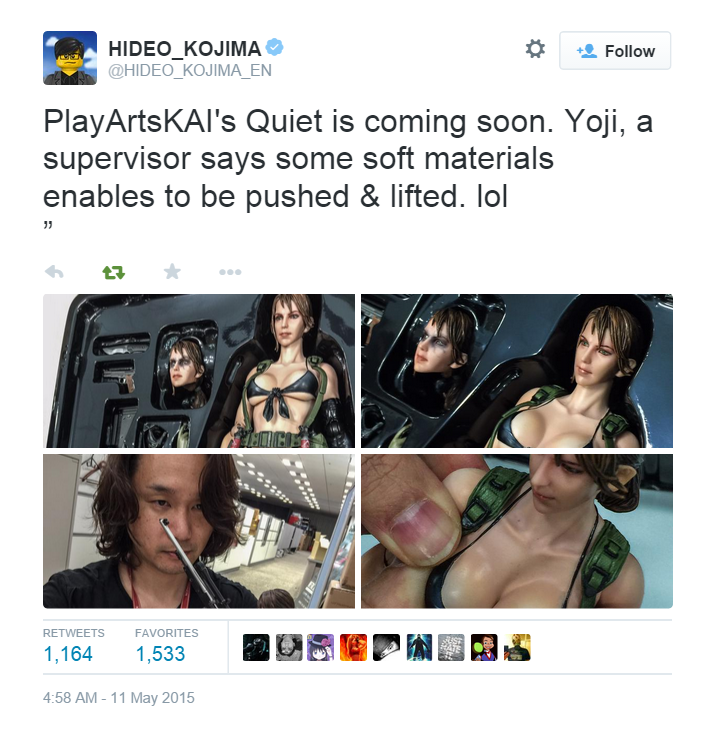 You can sum Anita’s response up with one word: triggered. The thing that makes me smile is Kojima knowing this would get the usual suspects like Anita up in arms. The author of that piece even speculates that he did it for promo purposes. I certainly wouldn’t doubt it, but I think it was more about just fucking with SJWs. So delicious.

I guess when you have fawning idiots like this guy below, you think you can get away with saying stupid shit like dolls can be molested (?!).  Maybe you should worry about real women being molested in third world countries at alarming rates, rather than a plastic toy. But no, that’s not your style, is it Anita?

Now she’s a scholar! HAHAHA. Wow. What can you say to such stupidity except “please don’t procreate.” I only wish Kojima would take an open shot at Anita and her clown army, but then again, he doesn’t really have to. Feminist Frequency has no real clout with gamers. They do get sucked off by the press quite a lot, but so what. It’s not translating into real power, as of now. As long as we stay on the offensive, it never will.

P.S. Don’t forget what Anita the Fraud said about Japan…

“The US bombed them back to traditional values – feminism does not exist in Japan. While I don’t like judging an entire culture…that does not excuse them.”

This devious scammer is actually trying to say that feminism hasn’t caught on in Glorious Nippon because of Nagasaki and Hiroshima. The ignorance and offensiveness behind such a statement is staggering. I knew she hated games and the people who play them, but this is taking it to the extreme.