OK, back to work after the SVU debacle last night. Thanks to Anna Merlan of Jezebel for shouting me out in her column today, even though she kinda mocked what I had to say. She did correctly point out that both sides seemed to be unhappy with the episode, but she correctly noted that most of GamerGate just laughed at it. As someone told me today, though, they only have themselves to blame. “GamerGate wants women driven out of gaming” is the phony narrative the gaming media has been pushing for months. So fuck ’em. They got what they wanted. BUT, that’s not what this column is about, as you can tell from the title. Instead, I wanted to celebrate a fresh victory.

Over SJW objections, petitions, and cry-sessions, Adam Baldwin will be attending the Supanova Pop Culture Expo later this year.

I never had much doubt that the organizers would end up doing the right thing. Sometimes, you have to play ball with the SJWs a little bit. By giving it a few weeks, no one can say they didn’t consider their complaints. Also, Baldwin did promise not to address GamerGate or it’s surrounding controversies at the convention, which I never expected him to do in the first place. That’s not the time or place for it. The nutcases on the other side were the ones turning a fan convention into a fucking political battlefield. I would say they ought to be ashamed, but I know that’s not possible.

Here’s the statement from Supanova, as well as from Mr. Baldwin: 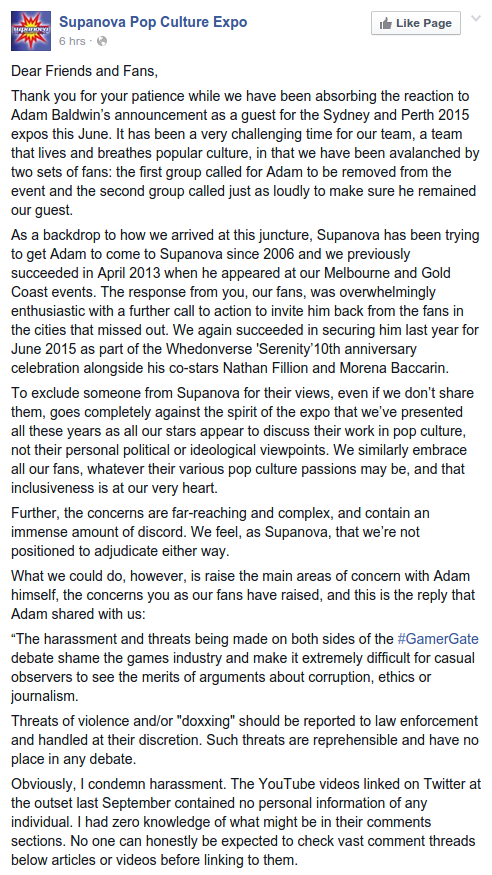 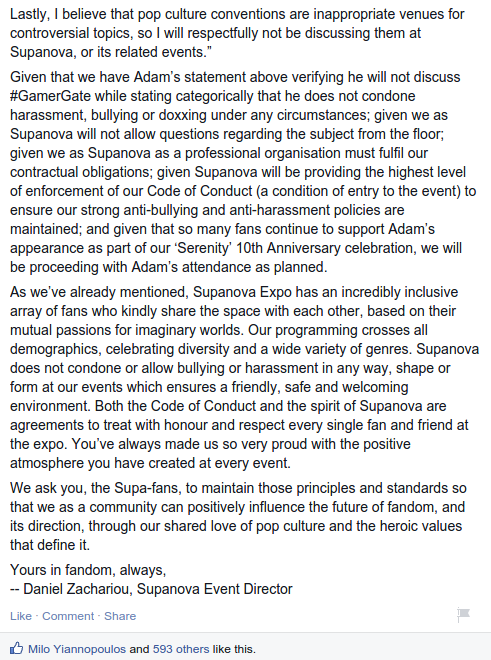 Expect more fights like this one. They’re gonna try to bully more people like us out of public life. That’s all they know. Look at how Brianna Wu tried to get Watch Dogs writer Ethan James Petty fired over what amount’s to political disagreements. A society like that is one that I don’t want to live in, and I’ll fight against that shit until my dying breath. 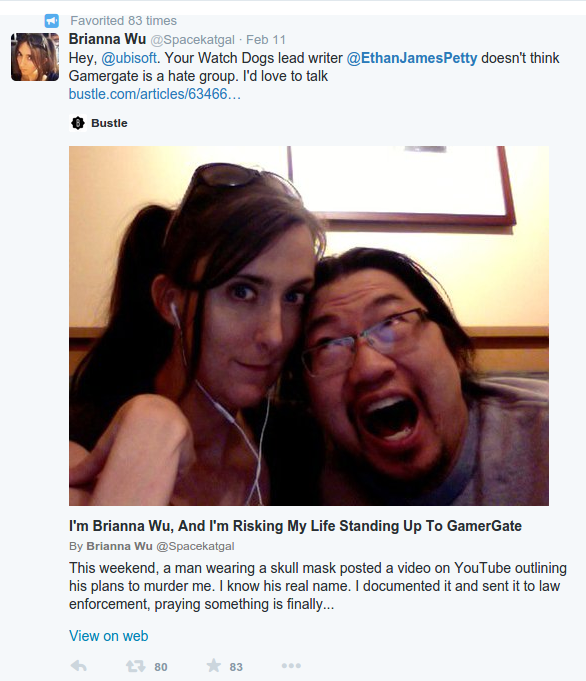 The only good thing about all this is, normal people are repulsed by these sorts of tactics. Stunts like this will only help us in the long-run, just like the SVU episode last night will swell our ranks. Keep your head up. Just like I’ve said in this section for months, we’re still winning. They hate that even after the unprecedented media barrage, GamerGate is still here. We’re by far the most dedicated enemy these radicals have ever faced, and they know it. Keep the pressure on, and they will fold.