If you’ll recall, British comedian Stephen Fry recently left Twitter while torching the prevailing mindset of SJWs and other assorted radical feminists on the way out.

Oh goodness, what fun Twitter was in the early days, a secret bathing-pool in a magical glade in an enchanted forest. It was glorious ‘to turn as swimmers into cleanness leaping.’ We frolicked and water-bombed and sometimes, in the moonlight, skinny-dipped. We chattered and laughed and put the world to rights and shared thoughts sacred, silly and profane. But now the pool is stagnant. It is frothy with scum, clogged with weeds and littered with broken glass, sharp rocks and slimy rubbish. If you don’t watch yourself, with every move you’ll end up being gashed, broken, bruised or contused. Even if you negotiate the sharp rocks you’ll soon feel that too many people have peed in the pool for you to want to swim there any more. The fun is over.

To leave that metaphor, let us grieve at what Twitter has become. A stalking ground for the sanctimoniously self-righteous who love to second-guess, to leap to conclusions and be offended – worse, to be offended on behalf of others they do not even know. It’s as nasty and unwholesome a characteristic as can be imagined. It doesn’t matter whether they think they’re defending women, men, transgender people, Muslims, humanists … the ghastliness is absolutely the same. It makes sensible people want to take an absolutely opposite point of view. I’ve heard people shriek their secularism in such a way as to make me want instantly to become an evangelical Christian.

He wasn’t done, however. The other day, he sat down for an interview with Dave Rubin and got panties in a twist once again with his scathing wit and biting commentary. Here’s the video, in case you missed it…

From the Daily Mirror…

“I think it started to happen in Britain with the attempted removal of statues of people who are considered unlikable – who were once beloved – and have become in a very 1984 way, ‘unpersons’.”

Fry then blasted the “deep infantilism” in today’s society as he said that people need to grow up and become more mature.

“In terms of how they think, they can’t bear complexity,” he said.

“The ideas that things aren’t easy to understand. They want to be told, or they want to be able to decide and say, this is good, and this is bad, and anything that conflicts with that is not to be borne.”…

“There are many great plays which contain rapes, and the word rape now is even considered a rape. They’re terrible things and they have to be thought about, clearly, but if you say you can’t watch this play, you can’t watch Titus Andronicus, you can’t read it in an English class, or you can’t watch Macbeth because it’s got children being killed in it, it might trigger something when you were young that upset you once, because uncle touched you in a nasty place, well I’m sorry,” he said.

“It’s a great shame and we’re all very sorry that your uncle touched you in that nasty place – you get some of my sympathy – but your self pity gets none of my sympathy.”

I couldn’t have said it better myself in a million years. Just because you have some sort of trauma or issue with tough subjects being broached in the media or entertainment worlds, doesn’t mean the rest of us have to sit around and hold your hand. In fact, I’ve known many victims of abuse and other horrors who don’t go running every time the topic is brought up, and they certainly don’t campaign to alter society in ways that fundamentally undermine the freedom of speech and expression. 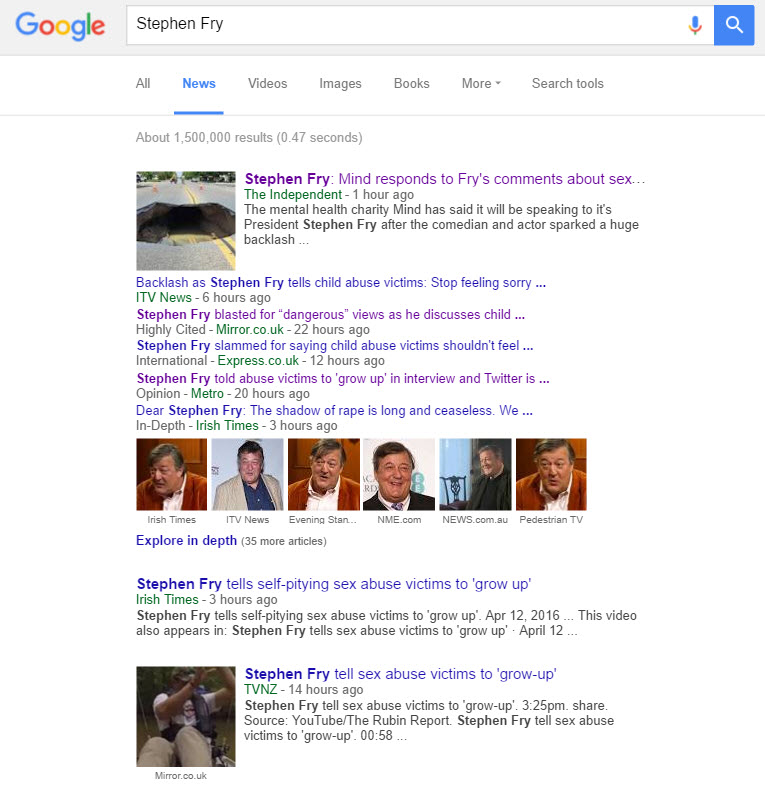 Of course, his commentary here has set off a massive counterattack against Mr. Fry, who I’m quite sure doesn’t give one single shit. He’s massively wealthy and beloved by tons of people, so I doubt these pissants and their contemptible criticism concern him all that much. Still, it’s funny to highlight and then laugh at these people, so here we go.

Christ, I used to be such a Stephen Fry fan.
What a pathetic little hypocrite he's become, or probably always was.

Dear Stephen Fry, on the subject of 'what you think': pic.twitter.com/sT92Msrr8Z

Yes, but everyone cares what Sarah Brand thinks. I’ve never heard of this broad in my entire life.

That’s funny, because Fry said the same thing himself earlier this year. Too many easily offended chumps running around, although this guy seems like he might be one of them.

“Look at them going for Stephen Fry’s career. Smell the blood. They want to destroy him” – Martin Daubney

Precisely. These people want to take down an ideological enemy for attempting to inject some humor and real-talk into the public debate. Fry is much too beloved for them to succeed, but that won’t stop them. You can see where this is headed, as they’ve attacked some of his charity work as well.

The charity said it understood why Fry’s comments may have upset some and stressed that he was speaking in a personal capacity.

Their statement reads: “Abuse is incredibly serious and can have devastating consequences for survivors, particularly for their life-long mental health. We would urge anyone who has experienced abuse of any kind to reach out and seek support.

“We understand why some people may have been upset by Stephen Fry’s remarks in a recent American TV interview. Stephen was speaking in a personal context, giving his own views as part of a longer discussion on the subject of freedom of speech.

“As President of Mind, Stephen Fry has done a huge amount to raise awareness and understanding about bipolar disorder and other mental health problems. He has supported Mind in our campaigning activities over the last decade and has helped enormously to change public attitudes in the UK about mental health for the better.

Stand strong, Stephen. Know that you have an army at your back and we’re all ready to go on the attack against cowards and useful idiots who war against free speech. Don’t let this wave of hate stop you from continuing to speak out on these sorts of topics, as you voice is very valuable to our cause. These speech Nazis and safe space goons can’t be allowed to win.