WHATEVER LIE IT TAKES: BioWare is Desperate to Save the Turd Known as Mass Effect: Andromeda

I know I’ve been talking about going off and playing Breath of the Wild a lot recently, but today, I actually did it! I’m about 25% of the way through the game and it’s one of the best things I’ve played in ages. But, no one really cares what I think about Zelda. I might write about it later anyway, for fun, but you don’t come here for that. You come here to see me rip on SJWs, “progressives,” and other assorted weirdos. Oh, and maybe a little breaking news and political commentary sprinkled in.

Almost 24 hours ago, I put up a post about a woman who claimed she was the “Lead Facial Animator” for Mass Effect: Andromeda. Yes, I threw in a gratuitous (and hilarious) gif because that’s what I do. I make the off-color jokes that most others won’t. Some people didn’t like it. I don’t particularly care. You know where the door is and no one forced you to click on the article in the first place.

Normally, this would have just been your regular day at the office for me, but the post took off and is currently sitting at 134,000 views according to the WordPress stats page. This ended up with a response from BioWare that has been retweeted thousands of times.

They say that I misidentified the woman, Allie Rose-Marie Leost. That is not the case. She listed herself as the “Lead Facial Animator” for Mass Effect: Andromeda. Today, she has changed that designation on Twitter. It was also previously listed that way on Instagram.

She still has herself listed as a Lead Facial Animator for EA over on Facebook. 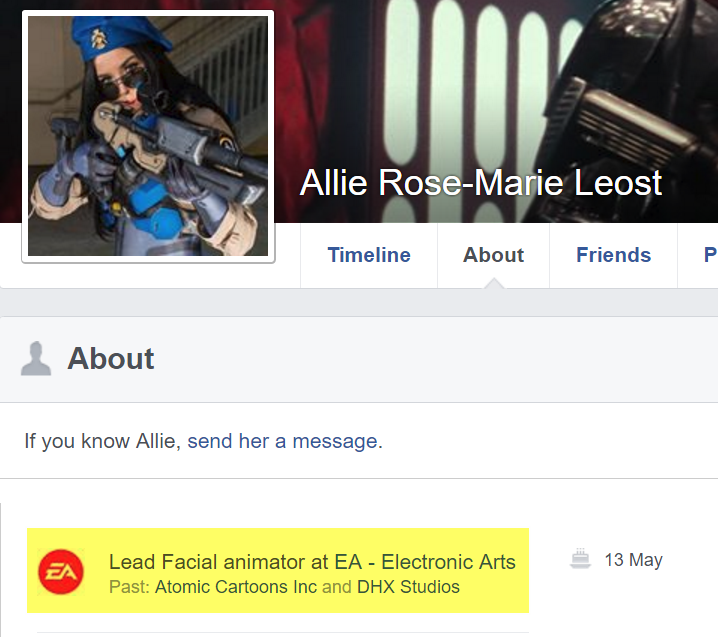 She has posted on social media many times in the past about working on Mass Effect: Andromeda. 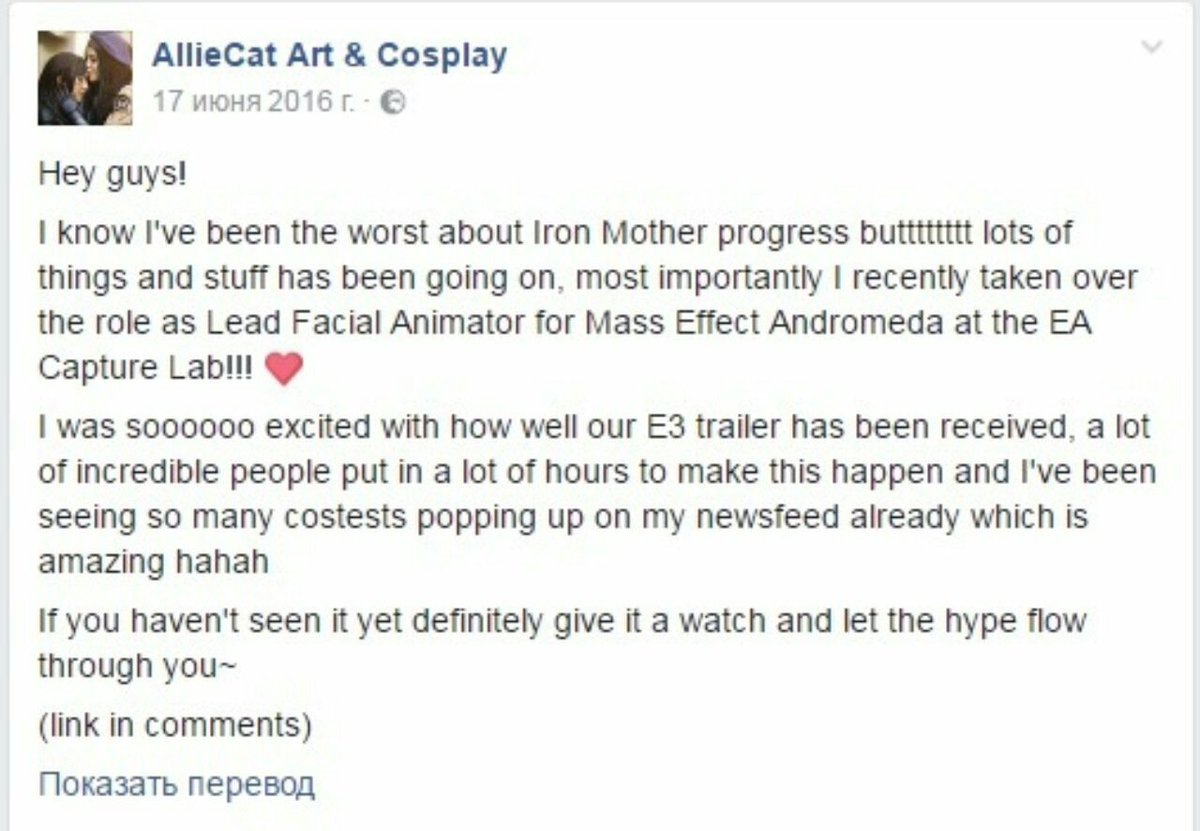 So, there’s a few possibilities here. One, is that BioWare is lying (or heavily spinning) and she did a lot of work on this game, possibly even being responsible for a good deal of the trashy finished product you saw. They would have good motivation to lie, since this whole thing makes them look like idiots. There’s potentially hundreds of millions of dollars on the line here, so there’s plenty of motivation to spin some bullshit.

(I lean towards the above paragraph.)

The second option is that Ms. Leost lied, which is clearly a very real possibility. Perhaps she inflated her importance to the project, or just didn’t update her social media because she felt it would cost her some clout among her friends and associates. Who knows what her motivations may have been if this was the case.

The third option is that both BioWare and Leost lied, which I wouldn’t rule out at all.

Instead of coming clean and trying to clear the air, one way or the other, BioWare (and by extension, Electronic Arts) has decided to cry about “muh harassment” and make it look like some kind of GamerGate episode. No, you all made a shitty game and staffed your company with scrubs, including a guy who has openly expressed racial hatred against white people. 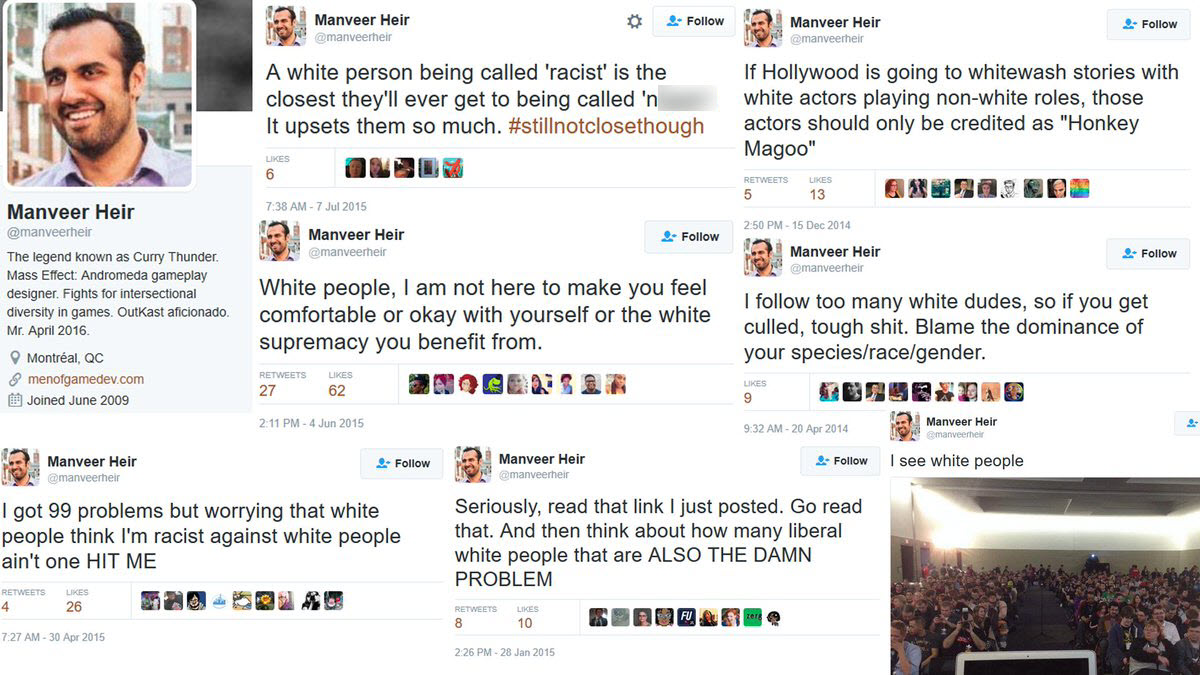 Today, they finally announced this guy no longer worked at BioWare.

No, but Manveer is no longer with BioWare (see his Twitter bio)

And when did he leave, you ask?

Huh, it really makes you think, doesn’t it? I wonder if Ms. Leost, like Mr. Heir, left BioWare just after wrapping up this crapfest. The point is, BioWare is full of shit and is desperate to do anything they can to save this turd. Misrepresenting the involvement of some hack (which they just did in the case of Manveer Heir, by the way) would not be something beyond the pale for these clowns.

And with that, I hope you guys enjoy the rest of your Saturday evening!

UPDATE: After I signed off, someone alerted me to a Polygon hit piece that names both me personally, and this website. Good times! It’s beginning to feel a lot like October 2014!

[BioWare’s tweet] is an oblique rebuttal of this claim, made yesterday by Ethan Ralph, that the “lead facial animator” at Electronic Arts’ Montréal studio is a woman who ascended to that role only because of her celebrity as a cosplayer.

BioWare’s statement above refutes that she ever was in a position of leadership, or that she is currently employed by the studio. It’s unclear what her status with BioWare is or was. We’ve reached out to an Electronic Arts representative to confirm.

Ralph’s post yesterday, igniting the harassment campaign, included a screenshot of Allie Rose-Marie Leost’s Twitter page in which she identified herself as “lead facial animator for Mass Effect: Andromeda.” That claim has since changed.

They put an archive of my post instead of a direct link. I went ahead and fixed that in the except above. Thanks for the free advertising, Polygon! This weekend keeps getting better and better.

I would also note that it’s kinda curious that BioWare refused to respond to Polygon’s shitty writer. You would think, if Ms. Leost truly wasn’t involved in this production in any real way, they would be eager to say so on the record, to a so-called journalist.

Their silence is deafening.

UPDATE II: Kotaku has noticed us as well! Top kek, as they say.

Allie Rose-Marie Leost, who worked for EA’s motion-capture labs in Vancouver, saw vicious harassment on Twitter and other websites today, most often from people who blamed her for Andromeda’s awkward facial animations. The harassment appears to have been primarily triggered by a vile blog post at Ralph Retort, a right-wing, GamerGate-tied website, that claimed Leost was the lead facial animator on Andromeda. That website also accused her of performing sexual acts to get her job at EA.