Big Randi Claims Derek Smart Was Talking to Her About Marriage, Gets BTFO (UPDATE)

Right before I watched South Park (which was hilarious…more on that later), there was a Twitter kerfuffle between Big Randi Harper and noted neutral Derek Smart. Now, for the most part, Mr. Smart has stayed out of GamerGate-related drama. He did go to AirPlay, where he served on the panel of questioners as a neutral. I must say, he did an excellent job, by the way. He’s also spoken out with a very reasonable voice for many, many months now. So what does a fat slovenly abuser like Hamburger Harper do? Well, it’s even more bizarre than her usual fuckery…and that’s saying a lot.

When I first posted this tweet, I had no idea what Big Blue was yapping about this morning. I thought she was just talking about some random guy. But I did know that it was total bullshit just by the way she phrased things. Plus, it’s Randi fucking Harper. She’s a walking disaster who looks like King Kong Bundy with a blue wig. No one wants to marry her, and even if they did, it wouldn’t happen like this:

If you look at the full exchange, like I originally didn’t do, you can clearly see that she’s talking about Derek Smart: 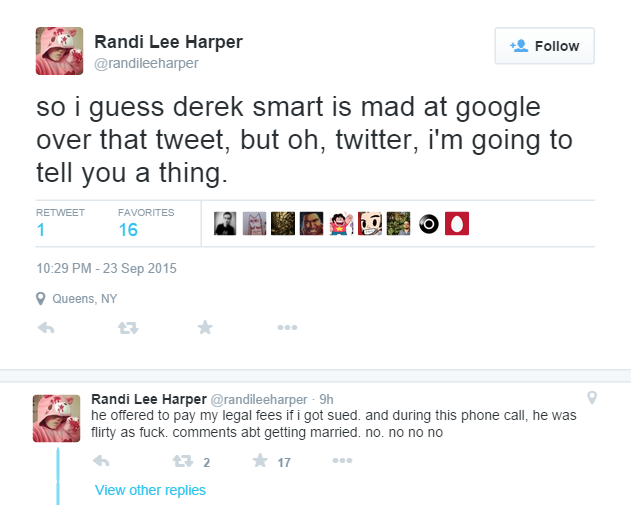 After realizing she was talking about him, Mr. Smart blew her out of the water on Twitter:

That wasn’t all, though. The man definitely isn’t taking things lying down. He just put out a Twitlonger, and I’m going to reprint it here for your benefit:

Hiya. Saw some Tweets from you and I am not sure what to think.

At first, I thought it was a joke, but since you have now blocked (don’t know why) me on Twitter, and seeing 3rd party accounts, I am slowly getting perturbed.

I have never been involved in all the crap you folks get up to on social media. And that’s precisely why I am firmly neutral on that whole GG fiasco.

When you were unfairly attacked for running a blockbot, I supported you because having been a target of attacks and online abuse for decades, I know how it feels.

Blocking people you don’t want to hear from, is perfectly OK, and I support it, regardless of who the person is.

As I have said repeatedly, using a blockbot which could be used for nefarious purposes (e.g. impacting someone’s job, associating them with an alleged hate group etc) is legally actionable. Which is why I cautioned you – and the IGDA (which no longer uses it) against its use.

I am a big supporter of accountability. By the same token, baseless accusations, victimhood, abuse of the system and its resources, are also legally actionable and despicable.

I thought that my advice, which I dole out to people all the time, would be taken in the spirit with which it was extended.

It is apparent that I may have been wrong.

When I stated that @googleideas had done something puzzling by embracing inclusion by seclusion, I meant just that.

There are many women online who are the target of abuse, and most of them are not e-celebs who either vie for attention or seek to profit from it.

I made no judgment about the caliber of candidates. And my comments are indicative of that.

And my comments had nothing to do with you. If it did, that would imply that I care enough about you to give a shit about what you are a part of. I don’t.

The fact is this. You have a history of doling out as much as you claim to receive. I get it. I tend to be the same way.

However, abuse is real and it’s despicable. Your actions seemingly make light of the plight of other targets of abuse.

You simply can’t hand someone a shit sandwich, then cry foul if they spray you with fizzed piss.

Listen. I know who you are, and I know what you do. If you stop this now, that will be the end of it. But if you don’t, you will leave me no choice but to defend myself.

As I am sure you are aware, I have a storied history of not putting up with abuse or harassment.

And trust me when I tell you this: There is always that one time when a person wakes up in the morning – usually after a drunken stupor, one night stand with the cab driver, or one too many puffs – and realize that they’ve done some really – dumb – shit.

Of course, as you’ve probably guessed by now, Big Randi has bitten back with her usual stream of bullshit. Here’s a little bit of that despicable slob for your perusal:

lol, i just blocked dsmart's phone number. what did he think was going to happen here? i am literally famous for blocking people.

Threatening my ass. It would be more accurate to say that your greasy fingers seem to have broken off more than you can chew this time. Like Smart said, he’s not just some anon or small-fry that you can bully and libel at will. He’s a man of means, and he won’t hesitate to bring you down a peg or three. I know that I would love to see your big ass get deposed in a court of law. I’m sure there’s a lot of things a well-heeled team of attorneys would like to discuss with your meth-smoking self. Please go after her and take it all the way, Derek. And if not, at least keep blowing her out on Twitter. Because that shit is really funny to watch.

@TheRalphRetort Hypebole as in…well, seriously, think about what she tweeted and you'll see why I was laughing this morning 2/

@TheRalphRetort @googleideas This incident is clearly documented. I will make the letter public when it gets sent to their legal team

@TheRalphRetort @googleideas If nothing else, it should make someone over there, take a closer look at an example of what they've championed