If you’ve been keeping up with this site over the last couple days, you probably saw our story about the AbleGamers charity supposedly suffering DDOS attack. As our own @Ebola Chan_ showed you, that turned out to be false. Tech Raptor had an interview with the guy who runs the charity, where he basically admitted to shooting his mouth off before knowing all the details. They were not attacked, and it was pretty reckless to go around saying that they were. Not only that, AbleGamers blamed it on us, and raised money directly off of it. I don’t care what anyone says, that’s not honorable.

(Here’s Zoe trying to shoehorn herself in. Also, a tweet from her last year about AbleGamers)

So @AbleGamers is dealing with nasty stuff today & is one of the only groups answering "How do I make my games more accessible?"

Question since I know some of y'all have done it – how do you setup a charity stream? I wanna help AbleGamers cus they do good work 🙁

The only “nasty stuff”, is you, Zoe. The SJWs immediately tried to reinforce the phony DDOS attack narrative. Several outlets continue to spread the fiction even now. What’s worse, is this negative publicity has also scuttled the new charity setup Mercedes had. I won’t be nearly as negative about them, however, as they explained their decision in a clear and polite manner. They didn’t use anonymous Reddit comments as a crutch to cancel the deal. 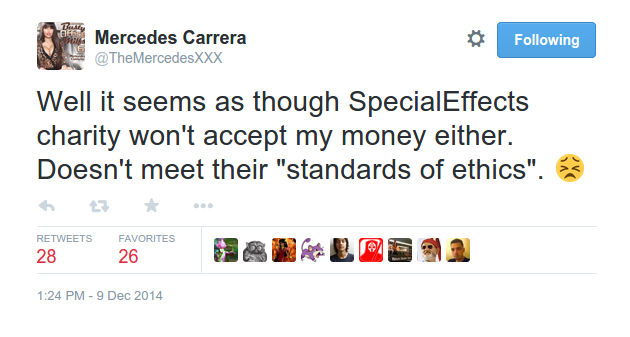 OK- new game plan. I know there are a couple of you #GG gamers who are disabled. Please DM me- I'll help you directly. No more charity BS.

For the record Special Effect was at least polite in their declination. It's something about their UK "ethics standards" (even more than US)

The most disheartening part of this is I kept it quiet so it means *someone*, *somewhere* let Special Effects know about this to subvert it.

I have a good idea who that someone might be, but of course we can’t say for sure. Regardless, I’m appalled at the treatment of Mercedes Carrera. She doesn’t need me, or anyone else, white-knighting for her. It’s just that the intellectual dishonestly on display hereis staggering to me. If she was a radical feminist porn star trying to donate, and they barred her on the account of her affiliations or job, then there would be an outrage. Jezebel would have three editorials up by now if this were one of their ideological kinfolk. Since it isn’t, they don’t give a shit.

Radical feminists say nothing about @TheMercedesXXX being treated differently on basis of her work. They're hypocrites. #GamerGate

In a way, I’m glad all this happened. I hate that Mercedes has been treated unfairly, but this exposure makes the SJWs look like the liars and hypocrites that they truly are. I can’t say that AbleGamers lied about GamerGate intentionally, but they damn sure spread a lot of misinformation about us (and the record still hasn’t been set straight everywhere). Thankfully, we can, and will, make our own moves. This is just another lesson in not being dependent on the existing power structure. Do what you need to do yourself, and fuck those who don’t agree with how you live.

The best part is I've now realized it's necessary to start my own foundation & fortunately I have the money and time to do so . #PornCharity

EDITOR’S NOTE: We will be live with Mercedes Carrera tomorrow night at 10PM EST on TheRalphRetort.com’s new YouTube channel. I’ll post the link here on the site before we go live.